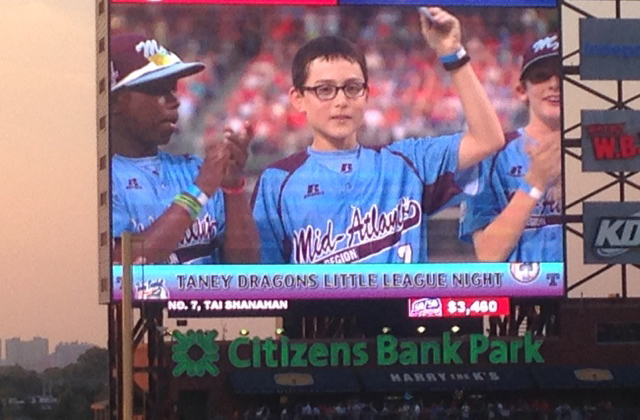 Tai Shanahan tips his cap as he is introduced along with his Taney Dragons teammates at a special ceremony Aug. 27 at Citizens Bank Park before the Phillies-Nationals game. (Photos by John Knebels) 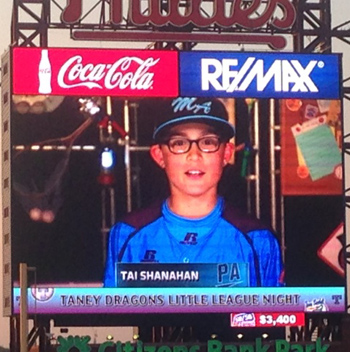 Among the other unexpected moments in an outstanding year for Tai Shanahan was having his picture blazoned on the Phanavision scoreboard at Citizens Bank Park Wednesday night.

Some point soon, the media blitz and celebrity status will come to an end.

Requests for interviews. Autograph seeking from strangers. Appearing on NBC’s “Today Show” in New York City. Waving to onlookers from a float during a six-mile parade from center city to South Philadelphia’s FDR Park.

But it was the latest celebration that arguably overshadowed the others for the Taney Little League baseball team that represented its city so well in this year’s Little League World Series in Williamsport, Pa.

Before Wednesday night’s Phillies-Nationals game at Citizens Bank Park, each Taney player and coach walked together on a makeshift red carpet from center field to the pitcher’s mound. They shook hands with area dignitaries and every Phillies player and coach, and were individually introduced to the crowd by legendary public address announcer Dan Baker.

They then took a victory lap around the stadium before joining in unison to throw out the game’s traditional first pitch. Players and coaches were each presented with a game ball and an official Phillies jersey with their names and numbers on the back.

Yes, when it comes to putting on an unforgettable party, no one does it quite as well as the Philadelphia Phillies.

(Watch a video on the celebration at the ballpark.)

But breathtaking elements of such a surreal experience are about to be replaced by normalcy. Tai Shanahan knows this.

Shanahan, a seventh grader from West Philadelphia’s St. Francis de Sales Parish and School, is the Taney outfielder whose grounder to shortstop preceded an errant throw to first base that allowed teammate Zion Spearman to score the dramatic winning run against Texas in the LLWS American quarterfinals.

“On one hand I think I will miss it,” said Shanahan, whose first-pitch recipient was Phillies outfielder Ben Revere, culminated by a celebratory embrace. “But then I think I’ll be really fine with it.

“I was disappointed that we didn’t get to the championship because we came so close, but something like this hardly ever happens for people, especially our age. We have a lot to be thankful for.”

After that big win against Texas, Taney lost the next two games of the double-elimination tourney, and a season that had begun in April finally came to an end. But what a journey had ensued.

It had begun as an in-house array of teams sparring with each other a few times a week. After its conclusion, 12 players were selected to represent the Taney League’s traveling team.

Then they won a championship in districts … then did the same in sectionals … and again in states … and, amazingly, yet again in regions. Thus, the first-ever Little League World Series team from Philadelphia was officially born.

“It almost feels like a long time ago when the World Series started,” Shanahan said. “I don’t think any of us knew what to expect. We definitely didn’t figure on some of the things that happened.”

Nor did Tai’s brother, Liam, who played for Taney’s 15-year-old team. Like Tai, Liam has been an altar server at St. Francis de Sales since fifth grade. The brothers have served many Masses together, particularly at either 5 p.m. or 7 a.m.

Liam admitted that he had not foreseen Taney advancing to the third round. For that matter, given the rugged all-around competition, he was surprised that Taney had even reached the prestigious tournament.

But as they continued to advance, Liam and his father, Pat, a 1980 graduate of St. John Neumann High School and a 25-year teacher at Roman Catholic High School, helped the Taney coaches by hitting batting practice. Meanwhile, matriarch Quyen Shanahan, an associate general manager at a radio station, provided yeomanly work as Taney’s unofficial communications director.

Chipping in here and there “meant a lot” to Liam, especially because his little brother, who on Aug. 25 turned 13, was on the team.

“None of the players or their families will ever forget this, obviously,” Liam said. “This was a once-in-a-lifetime experience, and I think they did a really great job of handling the pressure.”

And while Liam wishes he “could have played in something so amazing,” he admitted living vicariously through Tai’s exploits.

“When he was up to bat, I was nervous,” Liam said, “especially before he got the game winner against Texas. All of his hard work paid off. It paid off for every player.”

Tai was nervous, too. Nervous, surprised and ultimately elated before being mobbed at first base my teammates and coaches.

“At first I thought it might get through, then I saw the shortstop make the play,” Tai said. “I knew the throw was bad when it almost hit me in the head before I got to first base. When I knew we won, I just jumped in the air.”

He wasn’t the only Shanahan to leap for joy. Along with his parents and brother,

Tai’s paternal grandparents had driven to the game.

Later, Shanahan and his teammates watched the highlights of the victory on ESPN’s “Sports Center.” Shanahan had a difficult time believing it was he and his friends on television.

“Never thought that would ever happen,” he said, “and I doubt it will ever happen again.”

Then again, with today’s technology, particularly YouTube, Tai Shanahan can re-watch his game-winning contribution as many times as he wishes.

“This is something that Tai can tell his kids,” Liam said. “Every time the Little League World Series comes around, he can relive it. He can tell them that he was there.”

After the Phillies defeated the Nationals, 8-4, Grady Sizemore spoke about meeting the players from Taney.

“They have a lot of energy and love for the game,” said Sizemore, who provided the go-ahead runs with a pinch-hit, two-run homer in the sixth inning. “Going through something like that is exciting for anyone, especially when you’re young.”

“It’s great for them to have an experience like that and it’s great for the big-league guys, too,” Ruiz said. “It’s fun to watch them have a good time and to shake their hands. It brings back memories of when we were in little league. I’m very impressed with what they accomplished.”

PREVIOUS: Taney Dragons lose a game, but everybody wins