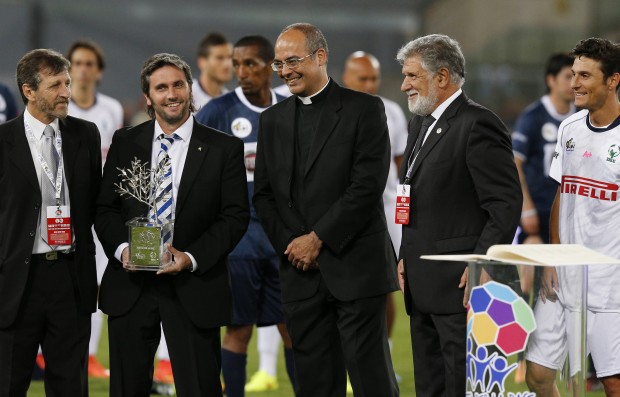 Argentine Father Guillerro Karcher, a secretary to Pope Francis, attends a ceremony at the conclusion of the first "Interreligious Match for Peace" at Olympic Stadium in Rome Sept. 1. (CNS photo/Paul Haring) 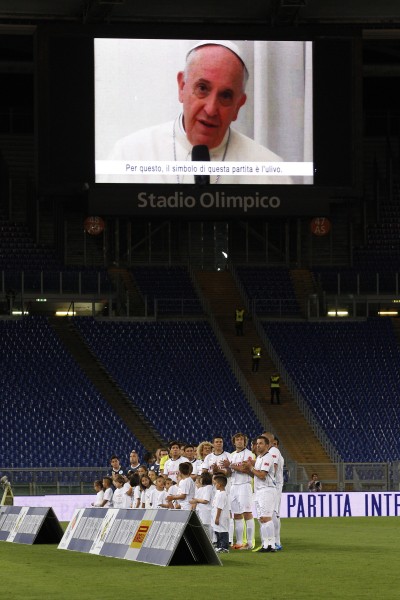 Pope Francis speaks via video link from the Vatican before the start of the first “Interreligious Match for Peace” at the Olympic Stadium in Rome Sept. 1. (CNS photo/Paul Haring)

VATICAN CITY (CNS) — Taking up a suggestion from Pope Francis, Argentine Diego Maradona and other soccer stars past and present played an “Interreligious Match for Peace” and tolerance Sept. 1, drawing some 20,000 spectators to Rome’s Olympic Stadium.

“The match is an occasion for raising funds for solidarity projects, but above all (for promoting) values that draw people together, no matter what their culture or religious creed,” the pope told the participants and organizers earlier in the day, during a private audience at the Vatican.

He thanked those present for having “promptly followed my desire to see champions and coaches of various countries and diverse religions face each other in a sports match, to bear witness to feelings of fraternity and friendship.”

“Soccer is a human phenomenon, and special,” Pope Francis said. “A sports event is a highly symbolic act that helps show it is possible to build a culture of encounter and a world of peace, in which believers of diverse religions conserve their own identity while living in mutual respect.”

“It’s important that you give a good example both on and off the playing field,” the pope told the athletes and organizers.

The players included the legendary Maradona, 53, who led Argentina to World Cup victory in 1986, and Roberto Baggio, 47, an Italian footballer inducted into his country’s Football Hall of Fame in 2011 and named World Player of the Year by World Soccer magazine in 1993. Another player, Andriy Shevchenko of Ukraine, asked the pope to pray for his civil-war-torn country.

Maradona told reporters he was deeply moved when he met the pope.

“I hugged him, and I felt proud to be an Argentine,” Maradona said. “After being far from the church, (I am) proud of returning to it after God took my mother. Today I am happy to be once again with the church, with Pope Francis, and to play for peace.”

Maradona, who has a history of drug abuse and obesity, played for 90 minutes.

“It was a unique experience, and now let’s all do something for peace and to combat world hunger,” he said at the end of the match.

The pope did not attend the game but appeared in a video shown at the stadium.

“When people play as a team, competition, instead of being war, becomes a seed of peace,” the pope, speaking in Spanish, told fans in the stadium and those watching live on television in Italy and Argentina.

Pope Francis established Scholas Occurrentes as an educational agency within the Pontifical Academy of Sciences to foster “social integration” of the needy and promote a “culture of encounter” through sports, the arts and technology.

The Pupi Onlus Foundation was founded by Javier Zanetti of Argentina, a former soccer player and captain of Inter Milan.

Ticket sale profits from the match were to go to the “Alternative of Life” project aiding disadvantaged children in Buenos Aires.

NEXT: Firm foundation of faith led Colts’ linebacker from Kenya to the NFL