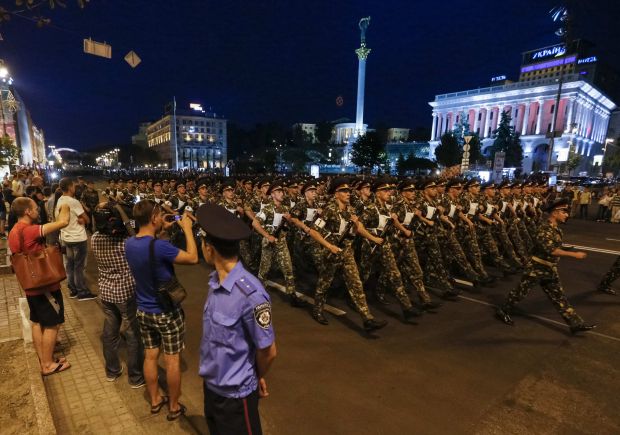 Ukrainian soldiers march along a street during a rehearsal for the Independence Day parade in Kiev Aug. 20. The parade will take place Aug. 24. (CNS photo/Gleb Garanich, Reuters)

VATICAN CITY (CNS) — As Ukrainians prepared to mark their Aug. 24 Independence Day under the cloud of fierce fighting in the East, Catholic leaders condemned the threat to Ukraine’s territorial integrity and prayed for a speedy end to the hostilities.

Patriarch Kirill had made the claims in an Aug. 14 letter to the patriarchs and heads of Orthodox churches around the world and in a similar letter Aug. 18 to the United Nations, the European Council and the Organization for Security and Cooperation in Europe.

In reply, Archbishop Shevchuk wrote Aug. 21 to the world’s Catholic bishops’ conferences and global political leaders saying the fighting in eastern Ukraine was the result of “foreign-supported destabilization, separatism and terrorist activity.”

“The tragedy that Ukraine is experiencing today, due to military aggression, is a tragedy for all peoples, believers of all faiths and all social groups,” he said. “Buildings, churches and monasteries of all religious and ethnic groups are being damaged or destroyed.”

In Crimea, annexed by Russia in March, and in the eastern regions controlled by pro-Russian separatists, he said, “some of the churches and religious communities have been targeted for discrimination, enduring outright violence.”

Muslim Tartars are most at risk, he said, but Ukrainian Catholics, Latin-rite Catholics, Jewish communities and members of the independent Orthodox Church have “been menaced.” 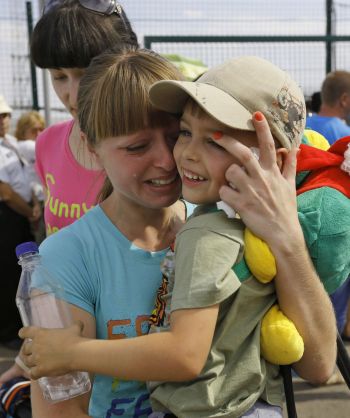 A Ukrainian woman weeps after being reunited with her son at the Russia-Ukraine border in Russia’s Rostov region Aug. 22. (CNS photo/Alexander Demianchuk, Reuters)

All those communities, Archbishop Shevchuk said, “are further endangered by the rhetoric of the Orthodox leadership in Russia, which is becoming increasingly similar to the propaganda of Russian political authorities and leadership.”

“Russian Orthodox leaders spread libelous information about Greek Catholics and other confessions, thereby putting them in danger from the separatist militants who identify themselves as warriors for Russian Orthodoxy,” the archbishop said.

In preparation for Independence Day commemorations, both Archbishop Shevchuk and Archbishop Mieczyslaw Mokrzycki of Lviv, president of the Latin-rite bishops’ conference, released statements urging their people to pray for peace and stability in their country.

Archbishop Mokrzycki described the situation, 23 years after independence from the Soviet Union, as an emergency provoked by a “lack of understanding and agreement among Ukrainians” and “encroachment” by neighboring Russia.

He urged Catholics to pray, through the intercession of Mary Queen of Peace, “that all who influence the fate of Ukraine, including us, would open the door of our hearts to know the truth that can free us from the snares of evil and lead to a happy life.”

Archbishop Shevchuk’s message, which was to be read at parishes Aug. 24, insisted on the right of Ukrainians to live in peace and security in their own country.

“In these most difficult times,” he said, Ukrainians have responsibility “for the preservation and strengthening of the gift of freedom” for which their elders and ancestors struggled for so long, including at the cost of their lives.

Celebrating Ukraine’s independence, he said, “let us pray to the Lord for peace in Ukraine” and the protection of its peoples, begging God to “stop the bloodshed, grief and tears in our land.”

NEXT: Ebola, war or disaster: how, when global service groups decide to flee