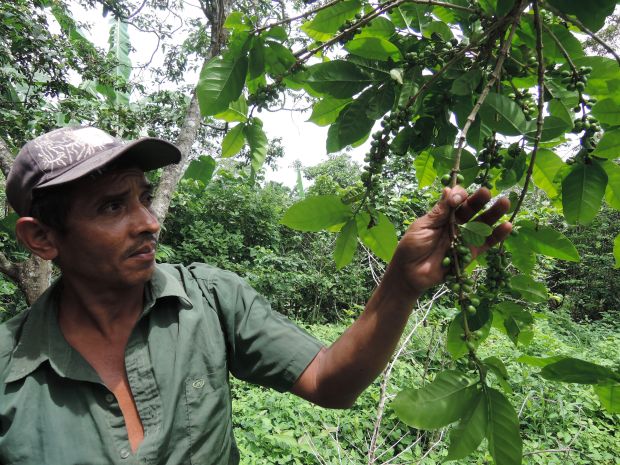 JUJUTLA, El Salvador (CNS) — Oralia Lopez had a brother leave for the United States in 2013. He had given up on eking out a living in El Salvador’s coffee country, where a fungus known as coffee rust wiped out crops and caused hardship and hunger. He arrived in the Washington, D.C., area, home to many Salvadoran migrants, and started sending home remittances.

His success encouraged two brothers to try their luck, Lopez said, but they were detained on the Mexico-U.S. border and deported.

“Agriculture is not providing anything here to survive on,” Lopez said.

Such is the desperation in this corner of El Salvador and other parts of Central America, where coffee crops can provide modest livelihoods. The coffee crisis in El Salvador has sent some searching for work in larger cities, while those staying put increasingly grow subsistence crops such as corn and beans, which stave off hunger, but can be bad for the environment.

No one knows if the onset of coffee rust is contributing to the emigration of Central Americans toward the United States, where more than 50,000 underage migrants have arrived so far this year. Some suspect it has had an impact, especially in Honduras, where observers say insecurity has reached into rural regions and drug cartels have forced farmers to sell their land.

Traditional summer emigration, along with “coffee rust and the lack of employment has been a critical push factor,” said Juan Sheenan, Honduras director of Catholic Relief Services.

“It’s not just the coffee rust alone. It’s a combination of the coffee rust as well as the gangs recruiting more heavily, using this as a platform to recruit: Their parents have no work,” he said.

The coffee plague is the latest misfortune for Central America, where the nonprofit International Coffee Organization estimated in 2013 that growers would see face production losses of $500 million and nearly 374,000 lost jobs.

In the hills of western El Salvador, farmer Manuel Antonio Gutierrez said the local cooperative in his region helped 115 members commercialize their coffee and earn a living — though none is employed at the moment — even if the crop “has always been a little difficult.”

He recalled past crises, such as the late 1990s and early 2000s, when coffee prices crashed due to a glut of product on the world market. This year, prices are reasonable, but there’s no crop to process.

“Last year, it was small. This year it’s nothing,” Manuel Enriquez, a 40-year veteran farmer and co-operative member, said of his crop.

The past price crash brought consequences, farmers said. Prices were slow to recover and farmers such as Enriquez were unable invest in their land or afford fungicides to fight off coffee rust.

“Due to the (low) price, farmers neglected their plots,” he said.

Catholic Relief Services has focused on assisting those impacted by coffee rust.

“What the fungus does is cause the plant to drop its leaves and the plant is not able to mature the bean or mature the coffee fruit,” Daniel McQuillan, an agricultural specialist with Catholic Relief Services, said in a statement.

Rust is common in coffee growing regions and has been present in El Salvador since at least 1978, said Juan Francisco Zambrana Velasquez, project coordinator for Catholic Relief Services in El Salvador.

But years of neglect and government inaction caught up with El Salvador. Zambrana said he suspects a week of unusually heavy rains in 2011 was the tipping point.

Catholic Relief Services has been promoting new ways of earning an income, such as keeping bees or, in the case of El Salvador, growing cocoa. Caritas in the Diocese of Santa Ana has implemented programs, such as raising chickens, that provide both food and income for farmers.

It has been a tough sell in past years, but “the coffee rust has people considering change,” Zambrana said.

It’s uncertain if the coffee crop will rebound anytime soon. Zambrana estimated it would cost $500 million to replaces coffee bushes throughout the country. Coffee in El Salvador has been politicized in recent years, which also hinders an adequate response, farmers said.

In the meantime, people are leaving.

“Coffee isn’t enough to support a household,” said Leticia Yanet Garcia, whose husband left to work construction in San Salvador. “It’s only women that are staying here, looking after the children left behind.”

NEXT: Chilean order sends priest to Spain after link to stolen babies scandal