CRS official: Gaza a ‘complete catastrophe’ on ‘brink of collapse’ 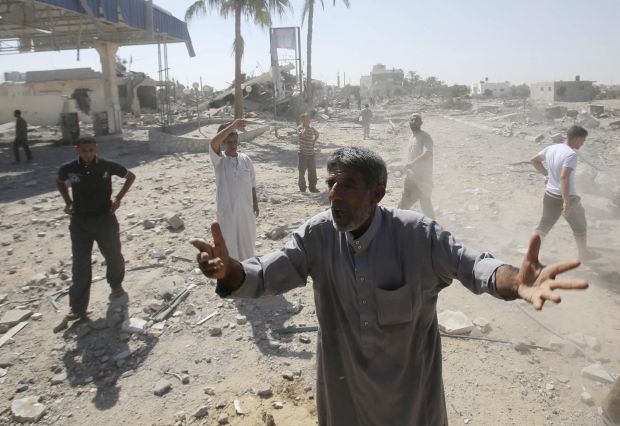 “Gaza is on the brink of collapse at this point,” said Matthew McGarry, who directs the Catholic Relief Services’ operations in Gaza, the West Bank and Jerusalem. He spoke to Catholic News Service in a phone interview from Jerusalem, describing the humanitarian situation in the Gaza Strip, a coastal strip subject to Israeli airstrikes and artillery fire.

Despite the “extremely dangerous and challenging situation” in Gaza, CRS humanitarian aid is being still delivered to thousands, McGarry said Aug. 4.

Several calls for humanitarian cease-fires have largely gone unheeded by both sides, while at least six U.N. facilities sheltering Palestinians were shelled.

More than 1,800 Palestinians, most of them civilians, have been killed and more than a quarter of the impoverished enclave’s 1.8 million residents displaced, according to Gazan officials. More than 60 Israeli soldiers have been in the Israeli operation, dubbed “Protective Edge,” seeking to destroy underground tunnels built by Hamas to carry out terrorist attacks in the Jewish state.

“Humanitarian workers are at risk. We had to limit our movements quite a bit,” McGarry said of the bombardments. Despite the constraints on movement, he said, “our teams have been able to move a good deal of humanitarian assistance.” 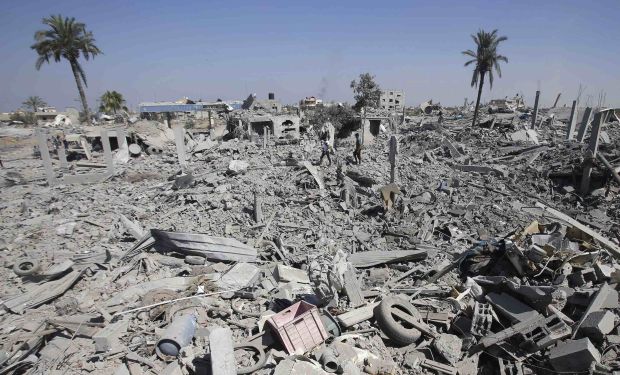 Palestinians are seen Aug. 1 walking in the rubble of destroyed houses in Khan Younis, which was hit by Israeli shelling and airstrikes during an Israeli offensive in the Gaza Strip. (CNS photo/Ibraheem Abu Mustafa , Reuters)

Distribution of 2,500 household emergency kits were underway to 15,000 people around the Gaza City area, including the heavily bombarded Gaza district of Shijaiyah, less than a mile from the Israeli border, and other northern cities, such as Beit Lahiya.

In addition, CRS has distributed “household kits, hygiene items, kitchen sets and some water storage containers to 500 households, a little over 1,000 people at this point,” McGarry said.

CRS, the U.S. bishops’ international relief and development agency, also helped facilitate the delivery of three truckloads of medical supplies, equipment and some medicines to the Anglican Al-Ahli Arab Hospital in Gaza.

Often, reaching out to assist people has been at enormous risk to the CRS staff, he said.

“It’s truly difficult. We have 15 Gazan staff. Half had to flee their homes because of damage and the high volume of airstrikes,” McGarry said.

“It’s extremely dangerous. It’s very stressful. It’s a very hard time. We have great, heroic staff but the situation has placed tremendous demands on them — on their personal and professional lives,” he added. “We have staff whose relatives have died from debris and shrapnel from airstrikes.”

Often the teams work under extremely difficult conditions with little access to drinking water or power in Gaza. The only electric power plant in the strip was disabled in late July.

McGarry said once a calmer environment settles on Gaza and people start to move, CRS plans to assist with badly needed water and sanitation work at centers for displaced families.

“If the conditions in Gaza become slightly favorable, we will scale up accordingly,” he said.

“In the last weeks, there were expectations that things would get better but those expectations have been consistently disappointed with the situation getting worse, to the point that Gaza is on the brink of collapse,” he said.

Gaza has been subject to a seven-year economic blockade, which Israel imposed after Hamas took over the Gaza Strip from the Palestinian Fatah party.