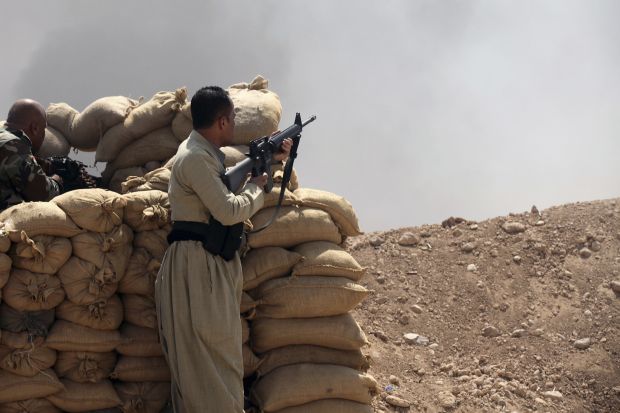 VATICAN CITY (CNS) — Pope Francis asked Catholics around the world to pray for tens of thousands of Christians from villages in northeastern Iraq who were forced from their homes in the middle of the night by Islamic State militants.

The pope also made a “pressing appeal to the international community to take initiatives to put an end to the humanitarian drama underway, to take steps to protect those involved and threatened by violence and to ensure the necessary aid for so many displaced people whose fate depends on the solidarity of others,” the Vatican spokesman said Aug. 7.

Jesuit Father Federico Lombardi, the spokesman, told reporters the pope was appealing “to the conscience of all people and every believer,” repeating what he had said July 20 after a similar forced exodus of Christians from Mosul: “May the God of peace create in all an authentic desire for dialogue and reconciliation. Violence is not conquered with violence. Violence is conquered with peace. Let us pray in silence, asking for peace.”

Overnight Aug. 6-7 fighters belonging to the Islamic State attacked the predominantly Christian town of Qaraqosh and other villages in Ninevah province, said Chaldean Patriarch Louis Sako of Baghdad. “The Christians, about 100,000, horrified and panicked, fled their villages and houses with nothing but the clothes on their backs.”

In an appeal, the patriarch described the scene as “an exodus, a real ‘via crucis'” or Way of the Cross. “Christians are walking on foot in Iraq’s searing summer heat” toward Iraqi Kurdistan. “They are facing a human catastrophe and risk a real genocide. They need water, food, shelter.”

The central Iraqi government appears incapable of protecting its citizens, the patriarch said, and there is no cooperation or coordination with the regional government.

The Islamic State fighters, he said, are taking advantage of the power vacuum “to impose their rule and terror. There is a need of international support and a professional, well-equipped army. The situation is going from bad to worse.”

Cardinal Fernando Filoni, the former nuncio to Iraq and current prefect of the Congregation for the Evangelization of Peoples, said the Islamic State militants are “chasing out thousands of Christians.”

“We are facing a serious humanitarian situation,” Cardinal Filoni told Fides, the congregation’s news agency. “These people have been left to their own devices with a closed border in front of them and they don’t know where to go.”

“The Christians had to abandon everything, even their shoes, and barefoot they were forced toward Iraqi Kurdistan,” a region already overwhelmed with displaced people, the cardinal said.

Chaldean Sister Luigina, a member of the Daughters of Mary Immaculate, told Fides that Islamic State fighters “arrived in force last night at 11 and, using loudspeakers, ordered the people to abandon their homes. The people were forced to flee in their pajamas.”

“Qaraqosh, the largest Christian city in Iraq, and all the surrounding villages were emptied of their Christian residents,” she said. “We still do not have precise figures on the number of displaced, but keep in mind that the Ninevah valley was also sheltering Christians thrown out of Mosul in the last few weeks.”

Qaraqosh was home to an estimated 50,000 Christians. It is located about 20 miles from Mosul, which was captured by Islamic State forces in June.

The Christian Aid Program, CAPNI, issued a statement Aug. 7 describing how Islamic State troops overran other villages and towns throughout the area. The women and children from Alqosh, it said, were evacuated to Duhok, but the bishop, clergy, men and youth stayed behind “with the strong will to defend and protect it.”