Pope to U.N.: Act to end the tragedy in Iraq 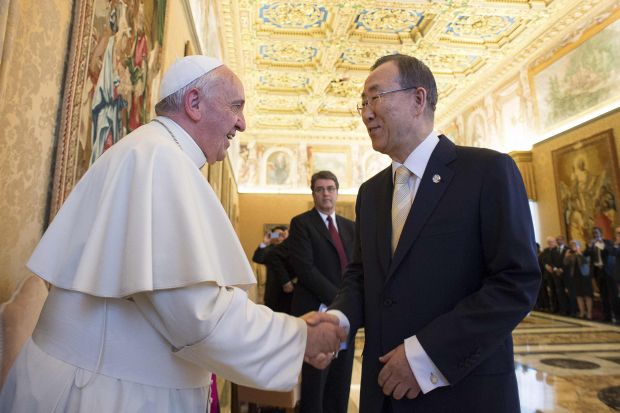 Pope Francis shakes hands with United Nations Secretary General Ban Ki-moon during a meeting at the Vatican May 9. (CNS photo/L'Osservatore Romano via Reuters)

In a letter signed Aug. 9, but released by the Vatican only after it had been delivered, Pope Francis told U.N. Secretary-General Ban Ki-moon immediate action was needed “to stop and to prevent further systematic violence against ethnic and religious minorities.”

The papal letter was sent after militants of the Islamic State terrorist organization had captured Mosul in late July and Qaraqosh in early August, killing hundreds of people and forcing tens of thousands of Christians, Yezidis and other religious and ethnic minorities from their homes.

The U.S. military began airstrikes against the Islamic state Aug. 8 as well as airdrops of food and water for Iraqi minorities who had been forced to flee.

He pointed to Pope Benedict XVI’s speech to the U.N. General Assembly in 2008: “Recognition of the unity of the human family, and attention to the innate dignity of every man and woman, today find renewed emphasis in the principle of the responsibility to protect. This has only recently been defined, but it was already present implicitly at the origins of the United Nations.”

If a nation cannot guarantee the protection of its citizens, Pope Benedict had said, “the international community must intervene with the juridical means provided in the United Nations Charter and in other international instruments.”

Father Lombardi said Pope Francis was not dictating the use of internationally sanctioned military power against the Islamic State or “giving specific operational indications — that is the responsibility of the international community to determine.”

Pope Francis, referring to the U.N.’s foundation immediately after the horrors of World War II, told Ban: “The tragic experiences of the 20th century, and the most basic understanding of human dignity, compels the international community, particularly through the norms and mechanisms of international law, to do all that it can to stop and to prevent further systematic violence against ethnic and religious minorities.”

“It is with a heavy and anguished heart that I have been following the dramatic events of these past few days in northern Iraq,” the pope told Ban.

Pope Francis noted that he had sent Cardinal Fernando Filoni, the former nuncio to Iraq and current prefect of the Congregation for the Evangelization of Peoples, to Iraq to express the church’s concern “for the intolerable suffering of those who only wish to live in peace, harmony and freedom in the land of their forefathers.” The cardinal arrived in Amman, Jordan, Aug. 12 and expected to reach Irbil, Iraq, Aug. 13, Father Lombardi said.

The presidents of 36 bishops’ conferences belonging to the Council of European Bishops’ Conferences sent a letter Aug. 12 to each member of the U.N. Security Council, calling for “decisions that would stop these acts of atrocity” in Iraq.

The purpose of the U.N. Security Council, the bishops said, is “to ensure international peace and security and to promote human rights,” something which requires real action and immediate decisions regarding Iraq.

NEXT: Liberian health system suffers from strain of caring for Ebola patients