With no pope in residence, Vatican opens gardens of summer villa 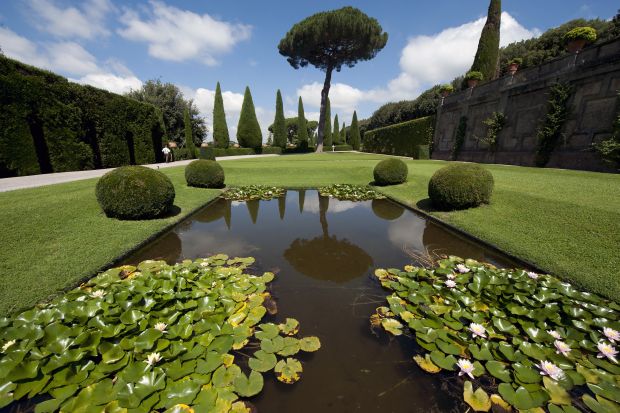 Called the Garden of Mirrors, a section of the gardens in the papal villas at Castel Gandolfo, Italy, has two ponds designed to reflect the sky, clouds and trees surrounding it. Pope Francis has decided not to move to the villa for the summer, but asked the Vatican to open the gardens to public tours. (CNS photo/ Alessia Giuliani, Catholic Press Photo)

CASTEL GANDOLFO, Italy (CNS) — The aisle is paved with stone from an ancient Roman road; the apse is made of carefully trimmed evergreen bushes; the columns are tall, thin cypress trees; and the nave is a lily pond, complete with gold fish.

Welcoming visitors to “our outdoor church” in Castel Gandolfo, Osvaldo Gianoli explains, “it has always been a place of prayer for the popes.”

Thanks to a very rainy July, damp and dark woods separate the area — formally known as the Garden of the Little Madonna — from the expertly groomed Boulevard of the Oaks in the gardens of the papal villas at Castel Gandolfo.

So far, Pope Francis has resisted joining the list of popes who have taken up temporary residence in Castel Gandolfo, praying and reciting the rosary in the garden 13 miles south of Rome.

In the meantime, Gianoli said, the pope “strongly desired that (the villas) be opened as a sign of sharing something unique, a common good, and so wanted this opening to share the gardens with the public.”

Gianoli, who was named director of the papal villas at Castel Gandolfo in December, has the challenge of fulfilling Pope Francis’ mandate to welcome the public while at the same time preserving the historic gardens and ensuring they can fulfill their main purpose: as a place of quiet relaxation for the pope and his top aides.

The papal property at Castel Gandolfo extends over 135 acres — compared to the 108.7 acres of Vatican City — and includes 17 acres of formal gardens, three residences and a working farm.

The formal Italian gardens, planted in the 1930s, are a meticulously maintained historic, artistic and botanical treasure, Gianoli said. The emphasis on symmetry and geometric topiary — the hedges are trimmed flat or carefully rounded — is meant to reflect and extend the architecture of the main buildings to the outdoors. 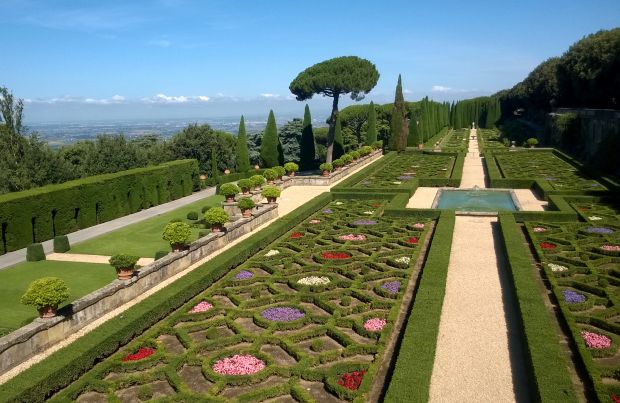 The Belvedere Garden with its bushes and flowers carefully trimmed into geometric shapes is one of the historic sections of the papal villas in Castel Gandolfo, Italy. (CNS photo/Henry Daggett)

The other treasure on the property is the first-century ruins of the summer villa of Roman Emperor Domitian, who reigned in 81-96. Visitors can walk around his small amphitheater and peek into the remaining 110-yard-length of a “cryptoportico” where the emperor could stroll far from prying eyes, remaining cool and dry in any weather.

The farm is not included on the itinerary for the public, although school groups have been invited, as have the children served by the Vatican’s St. Martha pediatric clinic. 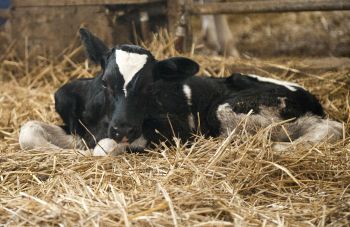 The farm at the papal villas at Castel Gandolfo, Italy, welcomed the birth of a new calf July 31. In addition to hosting the papal summer residence and historic gardens, the villas include a farm producing 185 gallons of milk a day. School groups occasionally visit, but the farm is not normally open to the public. (CNS photo/Alessia Giuliani, Catholic Press Photo)

The farm is the real deal, producing 185 gallons of milk a day, 50,000 eggs a year, honey, olive oil and vegetables, including some from the seeds used in Michelle Obama’s White House garden and given to Pope Francis as a gift. “The yellow zucchini are ready now — I’d never had yellow zucchini, but they’re good,” Gianoli said.

A treat he is looking forward to sampling in the winter will be the final result of September’s grape harvest. More than 400 little vines were planted three years ago and the first full batch of bunches are ripening on the vine, waiting to be picked and turned into wine.

The greenhouses are used not just for giving an early spring start to flowers that later will adorn the formal gardens at Castel Gandolfo, but also for growing some 500 poinsettias each year to decorate Vatican buildings and to sell to Vatican employees. In addition, the greenhouses are the winter home for the hybrid John Paul II hibiscus, whose brilliant white and yellow flowers are the colors of the Vatican flag. Every spring, the hibiscus are planted in the Garden of the Little Madonna.

Since March the Vatican has been offering a 90-minute guided tour of the formal gardens and the Roman ruins. Gianoli said 2,200 people visited in the first four months, and “I have another 2,000 who have reservations.”

The 55 employees of the papal villas at Castel Gandolfo have traditionally focused on maintaining the beauty and privacy of the property as a summer haven for the pope and his top aides.

While Pope Francis spent part of three different days at the villa in 2013, he is not scheduled to visit at all in 2014. But if he changes his mind, “We’re ready,” Gianoli said. “We’re always ready for the Holy Father.”

Preparations include such details as a vase of fresh hydrangeas at the foot of the statue of Mary that gives the Garden of the Little Madonna its name. 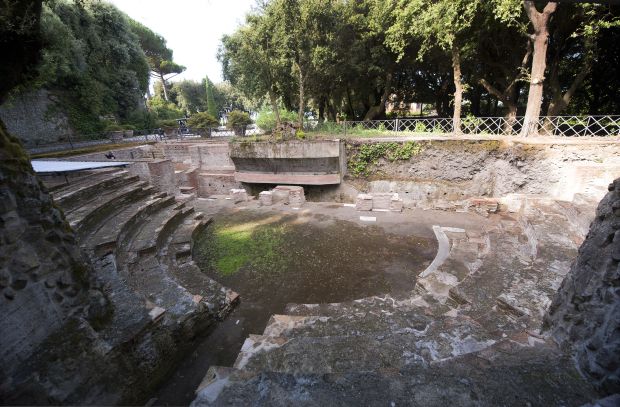 The papal villas at Castel Gandolfo in Italy are built on the site of the summer villa of the Roman Emperor Domitian, who reigned in 81-96. The ruins of his small theater are now part of the public tour of the gardens, which Pope Francis ordered to be open to the public. (CNS photo/Alessia Giuliani, Catholic Press Photo)

Castel Gandolfo became a papal summer residence in 1626 when Pope Urban VIII spent his vacation there, as he had done as a cardinal. Many popes never visited or could not — particularly in the years after the fall of the papal states and before a treaty was signed with Italy. When the Lateran Pacts were signed in 1929, the Vatican’s ownership was recognized and work began on making the formal gardens “as you see them today,” Gianoli said.

At different times in history, the gardens played important roles. The most dramatic was during the Second World War. “In 1944, the villas were a refuge for anyone who wanted to come. In that period, with the advance of the Allies after the Anzio landing,” he said, there were an estimated “12,000 people hosted by Pope Pius XII here. In fact, Pope Pius made his private bedroom available as an obstetrics ward; 35 babies were born here.”

More recently, television stations across the globe showed the villas when Pope Benedict XVI decided to spend the last hours of his papacy in Castel Gandolfo, flying there by helicopter from the Vatican Feb. 28, 2013. A month later, the newly elected Pope Francis made his first visit to the villas, spending several hours with Pope Benedict.

“These places are important to us because they are places where the popes have come to pray,” Gianoli said. “It is a place of peace, tranquility and serenity.”

Reservations are obligatory for the garden tour and are handled online through the Vatican Museums here.