Youths cheer for bands and pray to Jesus at festival 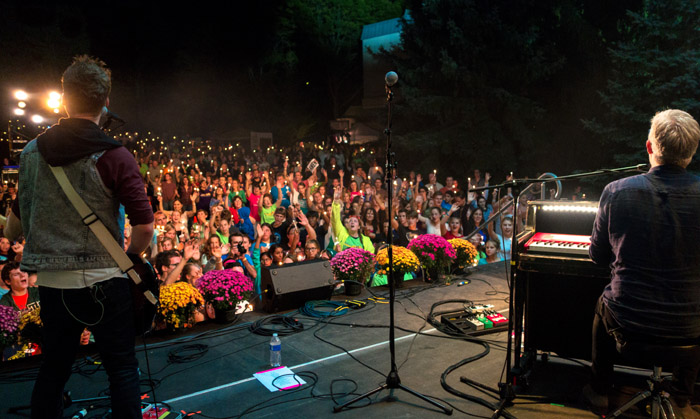 Matt Maher (at piano, right) and his band wow the crowd of young people at Abbey Faith and Music Fest at Daylesford Abbey, Paoli. 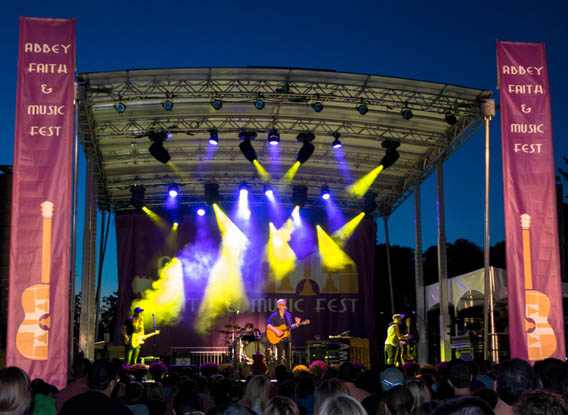 Matt Maher and his band play in the twilight on the Daylesford Abbey grounds, Sept. 20 in Paoli. (Photos by Michelle Kilgore)

St. Augustine said, “Those who sing well pray twice,” and on the rich green fields under a perfect sky at Daylesford Abbey on Saturday, Sept. 20, thousands of prayers were lifted to heaven through song.

The abbey and St. Norbert Parish, both in Paoli, Chester County, cohosted nearly 2,000 teenagers, young adults, parents and chaperones for the first-ever Abbey Faith and Music Fest, an all-day faith and music festival. The festival agenda included everything from Christian music and keynote speaker Bill Donaghy to the celebration of Mass, the sacrament of penance and evening benediction.

The attendees who were supported by 150 volunteers mostly from St. Norbert Parish set up lawn chairs and blankets all over the grounds of the abbey, home to the Norbertine priests and brothers, to listen to the many talented artists and share a common love of the Catholic faith.

As if the sight of almost 2,000 young people gathered for a day of good, clean fun wasn’t hope enough for the future of the Catholic Church, one portion of the event that developed in late afternoon gave an immense sense of pride to everyone.

Just before the late afternoon liturgy celebrated by the numerous Norbertine and archdiocesan priests in attendance, Father Richard Antonucci, abbot of the Daylesford community, invited seminarians from St. Charles Borromeo Seminary and the Norbertines to come to the front of the outdoor stage for a blessing.

After this he invited the young women professed as novices in their communities also to come forward; they received a blessing by Sister Rose Bernadette Mulligan, I.H.M. 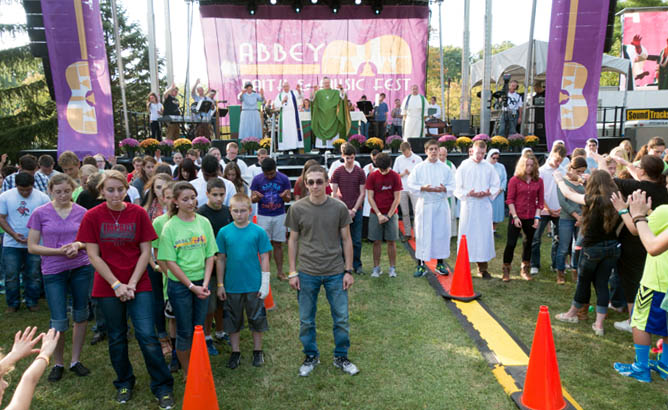 Seminarians, novices in religious life and other young people considering a religious vocation stand for a blessing — and applause — before afternoon Mass Sept. 20.

Then with some trepidation for fear of no one accepting his offer, the abbot invited “anyone open to being called by God to a vocation.” About 50 young people came forward and not only received a blessing but also standing-ovation cheers from the thousands of Catholics behind them on the abbey lawn.

“It was one of the most inspiring things I’ve seen in years,” Abbot Antonucci said.

He wasn’t the only person participating in the day to feel this way.

One man who also wished to remain unidentified shared his striking story: “I love this event. It is especially important to me because I had a reversion experience a few years ago and came back to the faith,” he said.

“Bill Donaghy played a major part in that for me, so it really means a lot to me to be here for this. It is the perfect day for this. Matt Maher and Audrey Assad are just wonderful.”

Also among the crowd were numerous food vendors and representatives of Catholic ministries and organizations who manned information tables atop a hill overlooking the field where young people and some parents listened to the music, played impromptu ball games or just socialized.

The tables showcased many items available for sale, pamphlets for further details and opportunities for mailing lists. Among these groups were the Knights of Columbus, the Archdiocese of Philadelphia’s Youth and Young Adults Ministry, Office for the New Evangelization, Generation Life, the Legion of Mary, Holy Spirit Radio, Theology of the Body Institute and many more.

Hanging out in the crowd was a group of students from Berks Catholic High School located in Reading. “It’s a good day,” said one student. “The music is awesome.” The student’s theology teacher said, “We were excited to bring everyone down here. The music is great.”

The artists also gave some feedback on the day. Kara Klein, a renowned Catholic singer-songwriter, said, “It is a joy to be here. It is such a blessing to see all of the young people here and to share my heart and my story.”

One band member said it “almost has that feel of an old Christian revival. It is exciting to see all the high school students dancing and having fun, just to see everyone up early in the morning to enjoy the day. It has been a pleasure to see so many sitting outside to worship. It was great to play for God and to open the show for everyone.”

Throughout the day, Norbertine and other priests heard confessions inside the main church as well as outside under the shade of the trees. Participants also took guided tours of the abbey during the fest.

The tours drew hundreds of interested participants who wished to learn more about the history of Daylesford Abbey, their many traditions and their founder, St. Norbert.

Officially called canons of Premontre, members of the religious community commit to singing the prayers of their daily liturgies every day. It is no wonder the Norbertines sponsored the faith-filled musical event.

The day came to a close with evening prayer, and candlelight eucharistic adoration supported by the music of Matt Maher.

Nestled in the rolling fields of the abbey on a beautiful day, thousands of souls offered their songs of prayer to the Lord — a true expression of “praying twice.”

NEXT: Wish a fond farewell to Bishop Thomas at cathedral