Despite 50 years of ‘War on Poverty,’ prosperity for many seems elusive 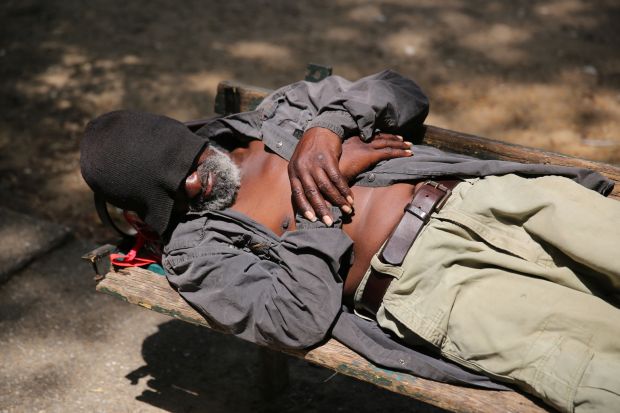 A homeless man rests on a bench in a park outside St. Vincent de Paul Church in downtown Baltimore in early July. According to new statistics released by the Census Bureau in Sept. 16, poverty in the United States is down, but only slightly. (CNS photo/Bob Roller)

WASHINGTON (CNS) — According to the Census Bureau’s new statistics, released Sept. 16, poverty in the United States is down, but only slightly.

So if you think prosperity’s just around the corner, it’s an awfully long block the nation must walk to get to that corner.

“We’d expect poverty to drop now that we’re in the fifth year of an economic recovery, right?” asked Gregory Acs, director of the Income and Benefits Policy Center at the Urban Institute, a Washington think tank.

Acs’ comment alludes to the intractability of poverty and the long, tough slog it is trying to get tens of millions out of poverty, given that 50 years ago, then-President Lyndon Johnson declared a “War on Poverty.”

While some skirmishes were won in that war — senior citizens, for instance, are far from the brink of economic disaster as they had been two generations ago — poverty persists across all demographic groups.

Even among non-Hispanic whites, the most affluent of demographic groups, the poverty rate is 9.6 percent, or close to 10 percent.

Pope Francis, talking in June to participants at an investment conference in Rome, said it was “increasingly intolerable” that the world’s financial markets have the power to determine people’s fate instead of being at the service of people’s needs. He also criticized the way “the few derive immense wealth from financial speculation while the many are deeply burdened by the consequences.”

Here’s a snapshot of some states and their struggles with poverty:

— In Texas, 4.5 million still live below the poverty line, although the poverty rate dropped to 17.5 percent, although in the Rio Grande Valley, the rate is double that. In the valley, median family income is $33,219, or 64 percent that of the state median of $51,563. Hidalgo County set a new minimum wage for county workers of $10.10 an hour, but Hidalgo is just one of 254 counties in Texas.

— Tennessee’s poverty rate dipped from 17.9 percent to 17.8 percent, but that’s of little comfort to 1.1 million Tennesseans living below the poverty line. “No matter how you measure it, Tennessee remains in the bottom 10 percent of people making ends meet,” Linda O’Neal, executive director of the Tennessee Commission on Children and Youth, told Public News Service. “More than one in four Tennessee children lives in a family experiencing economic stress.”

— In neighboring Kentucky, the poverty rate took a pronounced slide, from 19.4 percent to 18.8 percent. But while child poverty nationwide slid from 22 percent in 2012 to 20 percent last year, Kentucky’s child poverty rate is 25.3 percent. Some in Kentucky are pressing the state to OK a statewide earned income tax credit for its poor; the U.S. bishops have backed the EITC at the national level.

— North Dakota is benefiting from an oil boom, but overall poverty rose slightly. Child poverty, though, is at just 12 percent, and 13,000 kids live without health insurance.

— In Minnesota, the poverty rate in the state last year dropped to 11.2 percent, while the child poverty rate was 14 percent.

On the other hand, the federal poverty line remains unchanged — and probably unrealistic — at $23,550 for a family of four. That would mean living on $452.88 a week.

“While we can debate what kind of success the war on poverty has been, we haven’t eliminated poverty. We haven’t eliminated racial discrimination. We haven’t — we still have issues, I guess, to drop any pretense of eloquence,” Acs told Catholic News Service. “It’s useful to see where we are, where we’ve come from, and how we’ve changed. But if you looked through a more pessimistic lens, we haven’t made a lot of progress,” he added.

“You can’t blithely say that ‘if we just don’t put people in jail things would be much better,’ because crime-ridden neighborhoods are a problem,” he continued, adding the question has to be asked whether “the types of crimes people were arrested for and jailed for long periods of time warrants the disruption the removal of large number of people from the economy, from their families.

“With a prison record, it’s much harder finding a job — not nearly as economically viable as it was before. … and probably contributes the seeming lack of progress.”

What would happen to poverty if the nation didn’t do anything to fight it? “The overall trend in the labor market, the effects of technology and globalization, an increase in inequality, stagnation of wages, more benefits accruing to capital than to labor, without active anti-poverty programs one could reasonably expect that poverty would have grown worse, Acs said. “The counter-argument is that people would have worked harder if they didn’t have the safety net.”

Pope Francis, in his apostolic exhortation “The Joy of the Gospel,” wrote of an “exponentially” growing gap between rich and poor, which he blamed for, among other things, environmental degradation and rising violence. He attributed the gap to the influence of bad economic ideas.

And what if government did, at least figuratively, throw money at the problem? Acs said there are a limited number of experiments underway in which poor people are given sufficient funds for themselves and their families, but the efforts are at too early of a stage to draw conclusions about the effectiveness.