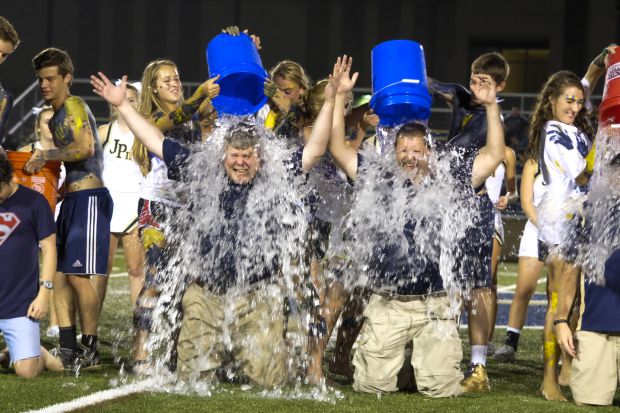 WASHINGTON (CNS) — Few people think of Iowa City, Iowa, as a hotbed of medical research. But in a roundabout way more Catholics are beginning to take notice of a Catholic, pro-life medical research center.

This summer’s ALS ice bucket challenge craze has netted nearly $100 million in donations for the ALS Association as celebrities and commoners alike are taking to social media, posting videos of themselves getting doused with ice-cold water (and sometimes ice cubes), and challenging four friends to do the same: Get an ice-cold soaking, make a donation, or both, all for the purpose of fighting amyotrophic lateral sclerosis or Lou Gehrig’s disease.

But because the ALS Association has acknowledged conducting research using embryonic stem cells — a practice opposed by the Catholic Church, and one the association said is funded by one specific donor and is coming to an end — a few dioceses have recommended making donations instead to the John Paul II Medical Research Institute, which conducts ALS research without using such cells.

The institute focuses on developing core technologies that all diseases need, and doing this within a pro-life value system.

Compared to what the ALS Association is pulling in from the challenge, the institute’s income thus far has been, well, a drop in the bucket, but it represents a 100 percent increase in donations.

“Last year, we raised $170,000 of private donations, primarily through word of mouth, people we know. Because we’re small, we don’t have an organizer for marketing, a professional fund-raising organization,” said Dr. Alan Moy, who co-founded the institute in 2006 with his wife Jeanne.

The institute’s website says that it saves money by being in the Midwest as opposed to either of the two coasts, and it doesn’t pay huge salaries to its researchers. In all, according to Moy, there are 10 full- or part-time employees in all phases of the institute, including nonresearch tasks.

Moy said the findings of the research done by the institute would have applications for ALS as well as for cancer and other debilitating illnesses.

“Our model is what do we need to do that can reduce the time and money it costs to push a drug into a clinical trial,” he said.

At the institute, as at Catholic hospitals, “there’s a lot of people who may not be Catholic and they may not be pro-life, but they have to recognize that the hospital isn’t going to do anything that’s opposed to Catholic teaching,” Mow explained. “They’re going to have to abide by certain Catholic principles. As long as they know that, I want them to work passionately, work hard, and know what the end game is. … People are interested in making a difference.”

Moy said many of the adult stem cells created at the institute have therapeutic potential for ALS.

The institute, which partners with Mercy Hospital of Iowa City to gain access to patients, has a plan — contingent on continued increased donations — to “scale up” its activities, Moy said. Elements of that plan include recruiting more ALS patients around the globe, collecting their clinical data, creating personalized stem cells from them, screening drugs on those ALS stem cells to find the best lead drug candidates for entering into clinical trials, manufacturing FDA-approved adult stem cells that could be approved for ALS clinical trials, and then participating in those trials.

“The ice-bucket challenge created an awareness among pro-life individuals about ALS and the supportive position of the ALS Association towards embryonic stem cell research,” Moy said in an Aug. 28 email to CNS. “With all of the attention given to this media phenomena, pro-life individuals just stumbled across the institute and decided to give us financial support to conduct research on ALS.”

NEXT: ‘The Amazing Parish’ explores ways to revitalize Catholic communities