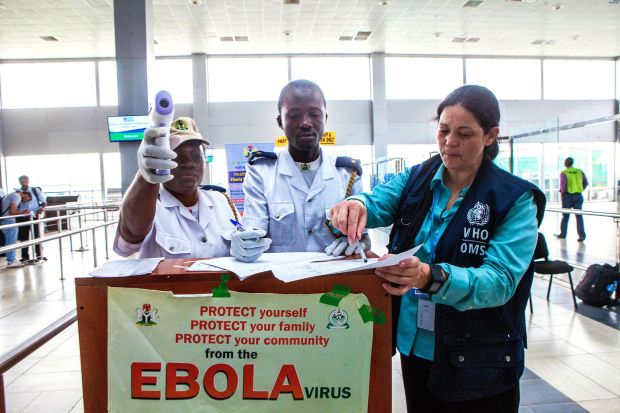 MIAMI (CNS) — A former U.S. Navy doctor and expert in infectious diseases said the West African outbreak of the deadly Ebola virus will be contained only if all ports of entry in the region are adequately screening for infected carriers.

Strengthening screening protocols at the land, air and sea ports in and around Nigeria was one of the top priorities for Dr. Aileen Marty during a 31-day assignment to Africa.

The Miami native, who is a professor of medicine at Florida International University, was on the trip serving with the World Health Organization’s Global Outbreak Alert and Response Network.

Marty, who spoke with the media Sept. 22 a week after her return to the U.S., said WHO officials had been particularly worried that if Ebola gained a foothold in Nigeria — with its large urban population and the region’s largest economy — the results would have been globally devastating.

An estimated 5,000 West Africans already have been infected with the Ebola disease that has killed approximately 2,500, including one Liberian-American man who in July reportedly imported the virus into Nigeria. That patient died in Nigeria along with several others who later became infected.

“One individual flew into Nigeria, the most populous country in Africa, by far, with an overwhelming impoverished population and that led to a social and economic crisis as well as a personal tragedy for a number of individuals,” said Marty, a Cuban-American and an alumna of the class of 1975 from Our Lady of Lourdes Academy, an all-girls archdiocesan high school in Miami.

During her trip to Nigeria, Marty helped set up a special quarantined field hospital for treating infected patients. She also traveled to several states in the African country to track possible cases, train border personnel and assess the overall situation.

Marty said she had first planned on being sent to hard-hit Sierra Leone but WHO redirected her to Nigeria after the first reported cases there.

She said she personally screened an estimated 1,000 possible carriers, including a number of confirmed cases of Ebola.

Marty has served as a commander, medical corps, in the U.S. Navy, specializing in tropical medicine, infectious disease pathology, disaster medicine, and in the science, medical response and policy involving weapons of mass destruction. She also attended the Navy War College, and the Navy’s Bureau of Medicine and Surgery has recognized her as an expert on chemical, biological, radiation and high-energy weapons.

Recounting some of the ramifications from that one Ebola case imported to Nigeria, Marty said that “the entire country was affected, schools were closed, industry was affected, trade was affected, tourism was affected, sports were affected and people are now afraid of Nigerians all because one individual in one airplane brought this disease to that country.

“Therefore, taking care of the points of entry where you enter and exit the country became an absolute imperative, and still is — while the outbreak rages on in Liberia, Sierra Leone and Guinea, you have to maintain vigilance at the points of entry in these countries,” Marty said.

Nigeria is better prepared for that now, she added, because of those recent efforts to bolster screening procedures at the country’s international airports and seaports, “but land ports were a lot harder because for every legal land border crossing there are a dozen more illegal border crossings so that became a campaign of dealing with the (tribal) chiefs and encouraging them to see why it was in their interests to control the movement of ill individuals across their borders.”

Marty said her WHO team in Nigeria was responsible for finding and training local volunteers to assist with traveler screenings and creating a protocol that could be taught to college students and science majors, along with training Nigerian physicians who will intercept cases that failed the primary screening. The work also entailed seeking financial and other donations from airlines, breweries and oil companies working in Nigeria and mobilizing society at large to be aware of what was going on there.

“We looked for a (traveler screening) system that would be very sensitive but not necessarily very specific and since it wasn’t very specific we expected a number of false positives, but that is a safer thing for the world.”

“Had Ebola spread among the impoverished people of Nigeria it would have been a world calamity. It can be brought under control but it does take a lot of resources and a lot of equipment,” Marty said.

Marty added that she was not impressed with what she saw as a weak screening at airports in Europe and the United States upon her own return from West Africa. She observed that a plane full of passengers from West Africa arriving in Europe did not get much scrutiny, nor did the Miami airport any questions of her.

She suggested airport authorities should have asked “at least rudimentary questions” of those getting off that flight in Europe, as well as screened them and tracked wherever they were going.

PREVIOUS: Studies confirm religion increases longevity, and marriage does too