With binge drinking on rise, colleges take steps to address its dangers 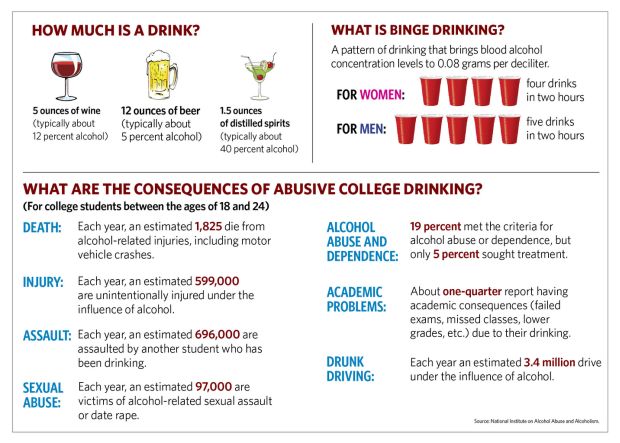 ARLINGTON, Va. (CNS) — College: a time for students to try on new ideas for size, build enduring friendships and struggle through a few pre-exam all-nighters. And, in between all of that, drink. A lot.

Data released last year by the National Institute on Alcohol Abuse and Alcoholism, a branch of the National Institutes of Health, shows that more than 80 percent of college students consume alcohol. Reflecting a sharp increase, half of those who drink consume alcohol through binge drinking — defined as four drinks for women and five drinks for men in a two-hour period.

The consequences of excessive alcohol consumption range from embarrassing to life-shattering and include everything from academic problems to assault, sexual abuse and death.

To help educate students on the dangers and offer healthy alternatives, Catholic colleges in northern Virginia and Washington and a Catholic campus ministry have established a number of programs and outreach efforts.

At Marymount University in Arlington, the goal is to educate students on the risks of binge drinking before they step foot on campus. That’s an ideal time, given the first six weeks of freshman year are an especially vulnerable period because of student expectations and social pressures, according to the NIH alcoholism institute’s report.

“The program is a tool not just for educating students but for helping them become aware of their perceptions of alcohol and to understand themselves better,” said Kelly DeSenti, Marymount dean for student development and engagement.

DeSenti said students come to school with a variety of backgrounds and experiences with alcohol, and the goal is to reach out to each effectively. “We don’t just want to be reactive; we want to be proactive,” she said.

Christendom College in Front Royal holds a mandatory freshman talk that includes a discussion of alcohol. The school nurse also hosts an information session for all resident assistants.

Amanda Graf, director of residence life, noted that Christendom typically attracts students who want to avoid a large party or drinking school. The pervasive Catholic culture and the students themselves keep drinking to a minimum, she said. “Drinking can occur, but in general, it’s amazing how much the drinking culture is controlled by students holding each other accountable.”

Graf added that there is a moral element to drinking and that the school conveys this to students.

According to the Catechism of the Catholic Church, overconsumption of alcohol disrespects the dignity of the human body. “Life and physical health are precious gifts entrusted to us by God,” states the catechism. “We must take reasonable care of them. … The virtue of temperance disposes us to avoid every kind of excess — the abuse of food, alcohol, tobacco or medicine.”

With a popular Greek system of fraternities and sororities at George Mason University, “heavy drinking is absolutely part of the campus culture,” said Father Peter W. Nassetta, chaplain and director of campus ministry at the Fairfax university.

He said every campus ministry outreach effort is an attempt to help students avoid unhealthy decisions like binge drinking and embrace nourishing ones. The recent alcohol-free luau — that drew some 1,200 students — is one example of such efforts.

Father Nassetta said the campus ministry’s student leaders, including missionaries from the Fellowship of Catholic University Students, play a key role in reaching out to students.

FOCUS missionary Carrie Wagner believes that many students who binge drink are looking for meaning and purpose in their lives — something that comes through friendship. “They are looking for friendships through drinking, or they’re looking to escape their problems,” she said.

Allison Kuenzig knows firsthand that so-called friendships forged through excessive drinking usually are hollow. The 2009 Marymount graduate spent many college weeknights and weekends drinking with other students, usually to get drunk. “We were barely acquaintances when sober,” she told the Arlington Catholic Herald, newspaper of the Arlington Diocese.

Like so many of her peers, Kuenzig said she made poor choices while drinking, including thinking it was no big deal to throw up at the end of the night or thinking she and others were OK to drive. “My guardian angel worked overtime all of my college career,” said Kuenzig.

According to the National Institute on Alcohol Abuse and Alcoholism, each year more than 3.3 million students between the ages of 18 and 24 drive under the influence of alcohol, and nearly 2,000 die each year from alcohol-related injuries.

Kuenzig, now happily married and pregnant with her second child, said looking back she sees the origins of her self-destructive behavior. “I think deep down I was lonely,” she said.

Along with loneliness and social pressures, the institute reports that a number of factors affect college drinking behavior, including unstructured time, the widespread availability of alcohol, and limited interactions with parents and other adults.

At The Catholic University of America in Washington, a number of programs are in place to help prevent unhealthy and illegal drinking. A new requirement this year is an online educational course, similar to Marymount’s.

The university’s Brief Alcohol Screening Intervention for College Students program helps students who may have a drinking problem find the tools they need “to make better choices in a non-confrontational, non-judgmental and non-labeling manner,” said Stephanie Davey, assistant dean of students. The program involves one workshop and two one-on-one sessions with a facilitator.

Like schools across the country, local colleges affirm the reality and severity of binge drinking and are attempting to tackle it head-on in a variety of ways.

The good news is that parents and administrators can make a difference in student behavior.

“Research shows that students who choose not to drink often do so because their parents discussed alcohol use and its adverse consequences with them,” states the NIAAA report. Additionally, “leadership from a concerned college president in combination with an involved campus … can help address harmful student drinking.”

NEXT: When discussing binge drinking, be honest, practical, parents are urged