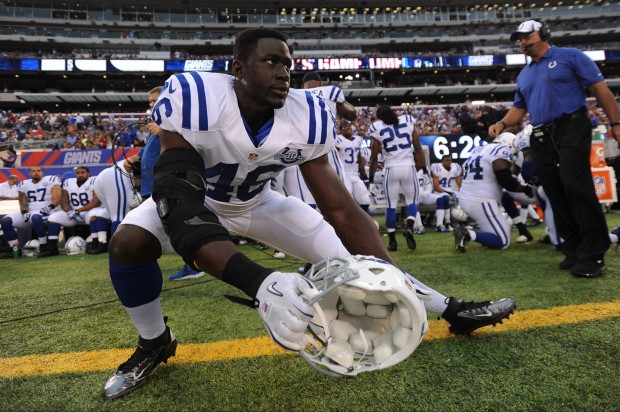 INDIANAPOLIS (CNS) — In the past year, Daniel Adongo’s world has been turned upside down — twice.

Adongo, 24, is a linebacker for the Indianapolis Colts. But the lifelong Catholic and native of Kenya had never played American football and knew little of the game before the Colts signed him to a contract in July 2013.

At the time, he was a successful professional rugby player in South Africa. So his world was turned upside down when he took a leap of faith and went halfway around the world to play a sport — at the highest level — that was entirely new to him.

Adongo spent much of the 2013 season on the Colts’ practice squad, learning the basics of the game. He played in a few games at the end of the season and showed promise for the future.

Coming into the 2014 season, NFL analysts wondered what would become of this newcomer to the game who had extraordinary athletic abilities.

Those questions remain unanswered. In the Colts’ first pre-season game Aug. 7 against the New York Jets, Adongo sustained a season-ending bicep injury on his first play.

Through the challenges, it has been Adongo’s Catholic faith that has kept his feet firmly planted on the ground.

“My faith is not going to waver just because I got injured,” Adongo told The Criterion, newspaper of the Indianapolis Archdiocese. “It’s part of the game. I’m not going to wallow in disappointment. Absolutely not. I’m looking forward to redefining myself, finding myself in this challenging time and looking for a better way to do things and come back even stronger.”

Adongo’s foundation of faith was laid by his family and school community in Nairobi, Kenya.

For eight years, he was a student at Strathmore School there. Founded in 1961, Strathmore provides a strong education and spiritual formation for students under priests of Opus Dei. Adongo’s formation contributed to his desire to excel in athletics. 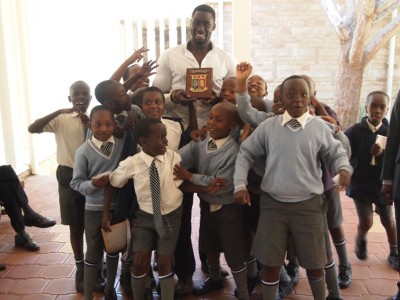 Students at Strathmore School in Nairobi, Kenya, jostle each other to have their photo taken with Daniel Adongo, a graduate of the school who is a linebacker for the Indianapolis Colts. (CNS photo courtesy of Strathmore School/The Criterion)

Honing one’s gifts though often requires sacrifice. Adongo did just that at Strathmore, said Principal John Muthiora, who taught English to the promising young athlete. Muthiora saw that commitment during class when he noticed that Adongo’s ankles were bulging.

“After the lesson, I asked him what was wrong with his legs, and he explained that he had weights strapped around his ankles for fitness,” Muthiora said in an email interview. “I found it hard to believe that an 18-year-old would be walking around with weights strapped around his ankles the whole day. It goes to show the level of commitment he had.”

Muthiora also knew that Adongo’s faith fueled his willingness to make sacrifices. Each day when he came to school Adongo first stopped in the chapel to pray, a practice that he and other students often repeated after lunch. He regularly attended Mass and received guidance from the school’s priest chaplain.

“When one puts his soul in order, other things fall into place,” Muthiora said.

Adongo’s rugby career began while still at Strathmore. He played on national youth teams in Kenya and later professionally in New Zealand and South Africa.

A successful career in rugby seemed to be the course God set for him. Then Adongo received a phone call from the Colts, presenting what he called “a God-given opportunity.”

“I hadn’t looked for the opportunity,” Adongo said. “So that points to one thing and one thing only from my point of view. Despite my being a good athlete, what were the chances of getting the call from the Indianapolis Colts?”

Once he signed with the Colts, he dedicated himself to learning how to play American football. Adongo approached the steep learning curve not simply from intellectual and physical perspectives, but from a spiritual one also. He has sought to offer as a sacrifice to God all of his work on the field, in the weight room and in team meetings.

Now his work with the Colts is the daily grind of rehabilitation. While the dream of starring on the field may be delayed, Adongo does not ignore the opportunity set before him as a way to glorify God, even in the hard, hidden work of rehab.

Since arriving in the U.S., Adongo also has had the opportunity to put his faith into action through community service projects that the Colts sponsor in central Indiana.

“Giving back to the community is giving back, regardless of where it is, whether it’s in Indianapolis, my hometown of Nairobi or in South Africa,” he said. “It doesn’t change if I’m in a different country. My faith is my faith. It stays the same.”

What has also stayed the same in Kenya and Indianapolis for Adongo is living among people of diverse backgrounds.

That began for him at Strathmore.

“There were people there who were (Protestant) Christians, who were Muslim, who were Hindu — people from all walks of life,” Adongo said. “It basically told us about respecting other religions, respecting other people’s choices. That interaction and that social setting early (in life) allowed me to be more adaptable in whatever environment that I’m put in.”

Adongo returned to Kenya for the first time since joining the Colts earlier this year. He visited Strathmore and encouraged students to develop their talents like he did.

“It was emotional,” he said. “It was great to go back and speak to the kids, because I sat in those same seats and had the same dreams.”

Gallagher is on the staff of The Criterion, newspaper of the Indianapolis Archdiocese.