Aid official says Gazans cautious, worry that nothing has changed 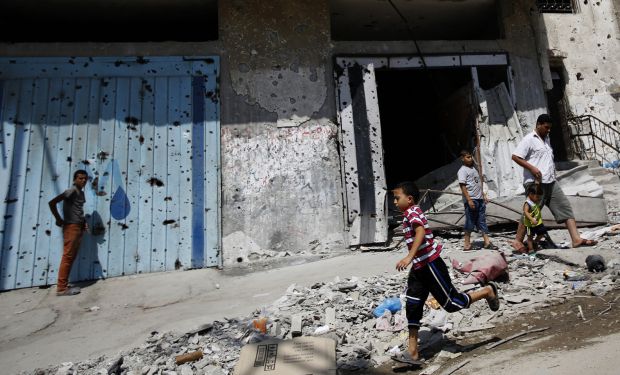 JERUSALEM (CNS) — Gazans are frustrated that, despite all the sacrifice and loss of life, nothing has changed for them, except perhaps having more fishing rights, said a Catholic aid official.

“Clearly there is anger felt, (but) people are cautious who they speak to and keep (their opinions) to themselves,” said Sami El-Yousef, Catholic Near East Welfare Association’s regional director for Palestine and Israel.

One Palestinian to whom he spoke told of the destruction caused by Hamas and its failure to meet the needs of the average person, El-Yousef told Catholic News Service Sept. 5 after a three-day visit to the Gaza Strip.

He said that, walking through the streets, he saw widespread destruction to both residential and commercial property, and directors of partner organizations who thought they would never see him again broke into tears at their meeting as they told him of their experiences.

Toward the end of his visit he could see lines of public employees at ATM machines late at night, waiting to receive their wages.

El-Yousef said people spoke about the eeriness of the precise intelligence information the Israelis had. He told CNS he heard several stories of incidents in which the Israeli warnings to the civilian population were very exact — all the way down to knowing the names of people living in certain buildings and who had left a building and who had not following a warning. People told him the Israelis would call back someone who had not left, asking them to leave.

“In the eyes of most people there was a concerted effort (by the Israelis) to try to give sufficient warning, unless there was an immediate danger of shooting by militants in the area or unless it was the home of an intended operative. Some families responded and others didn’t,” said El-Yousef.

He said that during and immediately following the 50-day summer war, Christian institutions in Gaza were able to provide assistance to those most in need. The war left 2,000 Palestinians dead, thousands injured, some 100,000 people homeless and immeasurable societal destruction in its wake.

“Christian institutions took their natural place by being responders, being alert to the community and providing services,” El-Yousef said. “They were (among) the first to respond. People are very appreciative.”

With a governmental clinic totally destroyed, the Near East Council of Churches mother and child clinic is the only functioning clinic, he said, and it opened its doors immediately following the Aug. 26 cease-fire. One mother came up to him during his visit to the clinic to personally express her appreciation, he said.

Nevertheless, the fear and anxiety level among the Christian population, as among the general Gaza population, is “incredible,” he said. People feel unsure of the future and worry that a single gunman could start shooting, leading to even more violent retaliation from the Israelis.

“People are very concerned about when it (violence) will end and when things can be fixed and they can go back to their normal lives,” he said.

Just as it will take decades to repair the physical and economical damage caused by the war, so, too, will it take years to take care of the psychological and emotional scars caused by the war and the many levels of loss, he said.

At the end of September, CNEWA hopes to begin its psychosocial intervention program at all the Christian schools and Christian institutions, he said.

The next pressing need for Gaza will be job creation he said, as the unemployment rate is extremely high.

Looking at the general situation, the work the Christian organizations can do to alleviate the suffering is “just a drop in the bucket,” he said.

“But we remember that, if you can improve the life of even one individual, then it is worth the effort and whatever we do, does make a difference,” he said. “The needs are so overwhelming.”

NEXT: Pope mourns murder of three missionary sisters in Burundi