Doctrinal wars? Both sides fire over Communion for divorced, remarried 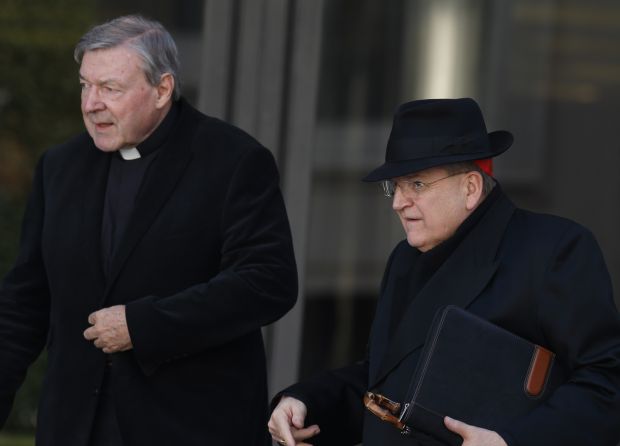 Australian Cardinal George Pell and U.S. Cardinal Raymond L. Burke leave a meeting of Pope Francis and cardinals in the synod hall at the Vatican in this Feb. 21 file photo. Both cardinals oppose proposed changes to church practice that would allow divorced and civilly remarried Catholics to receive Communion. (CNS photo/Paul Haring)

VATICAN CITY (CNS) — The extraordinary Synod of Bishops on the family will not open until Oct. 5, but some of its most prominent members are already publicly debating what is bound to be one of its most controversial topics: the eligibility of divorced and civilly remarried Catholics to receive Communion.

In an interview published Sept. 18, a proponent of changing church practice to allow such Catholics to receive Communion answered criticism from some of his fellow cardinals, suggesting they are seeking a “doctrinal war” whose ultimate target is Pope Francis.

“They claim to know on their own what truth is, but Catholic doctrine is not a closed system, but a living tradition that develops,” German Cardinal Walter Kasper told the Italian daily Il Mattino. “They want to crystallize the truth in certain formulas … the formulas of tradition.”

“None of my brother cardinals has ever spoken with me,” the cardinal said. “I, on the other hand, have spoken twice with the Holy Father. I arranged everything with him. He was in agreement. What can a cardinal do but stand with the pope? I am not the target, the target is another.”

Asked if the target was Pope Francis, the cardinal replied: “Probably yes.”

Cardinal Kasper, who will participate in the upcoming synod by personal appointment of the pope, was responding to a new book featuring contributions by five cardinals, including three of his fellow synod fathers, who criticize his proposal to make it easier for divorced and civilly remarried Catholics to receive Communion.

According to church teaching, Catholics who remarry civilly without an annulment of their first, sacramental marriage may not receive Communion unless they abstain from sexual relations, living with their new partners “as brother and sister.”

Pope Francis has said the predicament of such Catholics exemplifies a general need for mercy in the church today, and has indicated that their predicament will be a major topic of discussion at the synod. In February, at the pope’s invitation, Cardinal Kasper addressed the world’s cardinals at the Vatican and argued for allowing some Catholics in that situation to receive Communion.

The Oct. 5-19 synod is not supposed to reach any definitive conclusions but instead set the agenda for a larger synod on the family in October 2015, which will make recommendations to the pope, who will make any final decisions on change.

“Remaining in the Truth of Christ,” which Ignatius Press will publish Oct. 1, includes essays in response to Cardinal Kasper’s proposal by three synod fathers: Cardinal Gerhard Muller, prefect of the Congregation for the Doctrine of the Faith; Cardinal Raymond L. Burke, prefect of the Supreme Court of the Apostolic Signature; and Cardinal Carlo Caffarra of Bologna, Italy.

Cardinal Pell calls for a clear restatement of the traditional ban on Communion for the divorced and civilly remarried, to avoid the sort of widespread protests that greeted Pope Paul VI’s affirmation of Catholic teaching against contraception in 1968.

“The sooner the wounded, the lukewarm, and the outsiders realize that substantial doctrinal and pastoral changes are impossible, the more the hostile disappointment (which must follow the reassertion of doctrine) will be anticipated and dissipated,” writes Cardinal Pell, who sits on the nine-member Council of Cardinals advising Pope Francis on Vatican reform and governance of the universal church.

Cardinal Muller’s essay, previously published in the Vatican newspaper, reaffirms the traditional ban. However, the cardinal notes that many Catholics’ first marriages might be invalid, and thus eligible for annulment, if the parties have been influenced by prevailing contemporary conceptions of marriage as a temporary arrangement.

In the book-length interview, Cardinal Muller, whom Pope Francis made a cardinal in February, makes an apparent reference to Cardinal Kasper’s argument, which underscores the importance of mercy.

“I observe with a certain amazement the use by some theologians, once again, of the same reasoning about mercy as an excuse for promoting the admission of divorced and civilly remarried persons to the sacraments,” Cardinal Muller is quoted as saying. “The scriptural evidence shows us that, besides mercy, holiness and justice are also part of the mystery of God.”

Cardinal Burke, head of the Vatican’s highest court, warns that any reform of the process for annulling marriages — something both Pope Francis and Cardinal Kasper have said is necessary — should not oversimplify the judicial process at the cost of justice, since Catholics seeking an annulment deserve a decision that “respects fully the truth and, therefore, charity.”

Cardinal Caffara, whom Pope Francis personally named to participate in the synod, argues that divorced and civilly remarried Catholics may not receive Communion because their situation “is in objective contradiction with that bond of love that unites Christ and the church, which is signified and actualized by the Eucharist.”

To lift the ban, Cardinal Caffarra argues, would be to legitimize extramarital sexual relations and effectively deny the doctrine of the indissolubility of marriage.