For some Iraqi Christians, returning to homeland is not an option 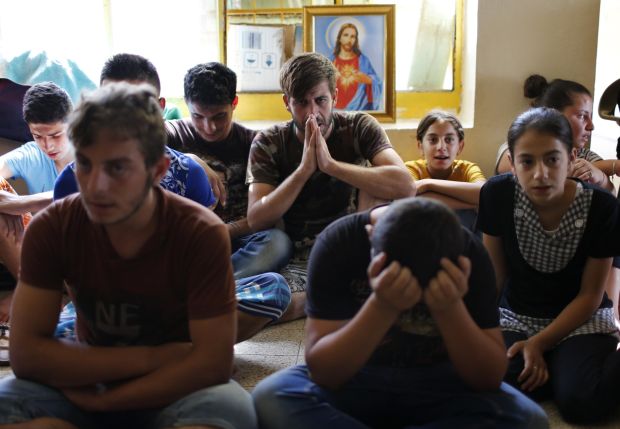 BEIRUT (CNS) — Uprooted from his home in Iraq by the advance of Islamic State fighters, Nouree sees no future for Christians in his country.

“It’s like a nightmare,” the Chaldean Catholic father of six told Catholic News from a modest apartment in Beirut where he and his family have temporarily resettled after fleeing Iraq. “They just came and took our villages,” Nouree said of the militants.

Nouree requested that his full name not be used to protect his identity.

“It’s not a coincidence. It’s like a plan to rid the region of Christians. We Christians paid the price, and the Yezidis (the minority religious community) did, too,” Nouree said. “Even though they pushed us out, we won’t forget our homeland. This is our past, our history.”

His village, Tel Isqof, about 19 miles north of Mosul, was home to some 1,500 Christian families, all of whom fled the advance of the Islamic State fighters in early August.

For nearly two months, following the militants’ attack on Mosul in June, Nouree and his family slept on the roof of their house to watch for flashing lights of artillery shelling, signaling such an advance because there were constant rumors that the fighters were coming toward their village.

“We were always on alert. We thought that at least if there was an attack, we could see it coming and evacuate, to save ourselves,” Nouree said.

But when the militants invaded Tel Isqof, Nouree said, the Kurdish regional forces, known as peshmerga, withdrew, leaving the villagers unprotected as they fled to Irbil, the capital of the Kurdish region of Iraq. Irbil now hosts more than 100,000 displaced Christians and other Iraqi minorities.

“We have no trust,” Nouree said. “There is no credibility, in the government, (in) the Kurdistan forces — even some clergy are leaving.”

In Kurdistan, he added, Christians are considered second-class citizens. He spoke of Cardinal Fernando Filoni’s Aug. 13-20 visit to Iraq as Pope Francis’ envoy and said the Kurdistan government is only trying to please the church with empty promises.

“Whatever the Kurdistan government promised him (Cardinal Filoni) will be only words,” he said.

Michel Kasdano, a third-generation Iraqi Chaldean in Lebanon who volunteers his time to help Iraqi refugees, also has observed the same mindset among the refugees he meets: They do not want to return to Iraq and, their relatives remaining in Iraq want to leave.

A retired general with the Lebanese army, Kasdano has mobilized a group of friends and relatives who have met with some 50 Christian Iraqi families, now refugees in Lebanon as a result of the Islamic State attacks in their homeland. Aside from listening to the tragic stories of the refugees, they distribute food, clothes and money to the families.

“In my opinion, there will be just a symbolic presence of Christians in Iraq, like a museum,” he told CNS.

It was clear 10 years ago that Christians were leaving Iraq, he said, not just because of threats, but “because there was no support, they saw no future.”

“There has been no concrete movement from the church, the international community or government authorities to anchor them there,” he said. “Despite pessimism, I still have my faith, and I still believe Christianity must remain in Iraq.”

The future is unclear for Nouree and his family, but his priority is to get resettled in another country.

In Beirut, he registered his family with the U.N. High Commissioner for Refugees and was issued an asylum-seeker certificate. His next appointment is scheduled for March 2015.

At that first visit to the UNHCR, Nouree got an indication of the frustration and despair faced by other refugees.

“I saw a young man, depressed and screaming, because he’s been here so long,” he said.

Even before this summer’s mass exodus of Iraqi Christians, there were about 9,000 Iraqi refugees in Lebanon, most of whom fled their homeland after the 2003 U.S.-led invasion. Lebanon has also experienced a flood of more than 1.5 million Syrian refugees, equal to at least one-quarter of Lebanon’s resident population.

“I’m open to do any kind of work to support my family,” Nouree said. But the 45-year-old biology teacher has not found any work in Lebanon, and competition is fierce among other refugees, many of whom typically work as laborers for $20 a day.

“My children are my hope — to go to school and be educated and to live in a democratic environment,” Nouree said.

His 17-year-old daughter, Mariam, a top student, dreamed of becoming a doctor and was to enter her last year of high school in Iraq.

Now Mariam and her two teenage siblings are working full time to support their family, each earning about $350 a month. She and her 14-year-old sister work at a confectionary business, and her 19-year-old brother works in a bakery. Those salaries cover the $700 monthly rent for their modest apartment in a run-down area of Beirut and the $200 electricity bill, but there’s not much left over for food and other necessities. Nouree’s elderly mother, who has Alzheimer’s, is also living with them.

A Sept. 5 report by Fides, news agency of the Vatican Congregation for the Evangelization of Peoples, quoted Father Paul Karam, head of Caritas Lebanon, as saying that around 350 families of Christians who fled Mosul and the villages in the plain of Ninevah have found shelter in Lebanon, “but the numbers continue to rise every day.”

“We at Caritas Lebanon provide health care, food and prime necessities,” Father Karam said. “However we are saddened by the fact that almost all of them (Iraqi refugees) have no intention of returning to their country: Their desire is to emigrate, to leave the Middle East for ever. Sad to say this is the situation. And also on this issue the international community is called to make sensible decisions, unless it wants to contribute with its policies, to the extinction of Christians in Iraq,” Father Karam said.

NEXT: Catholics in Libya said to be ‘trapped and helpless’ in latest chaos