Frequently asked questions about the extraordinary synod of bishops 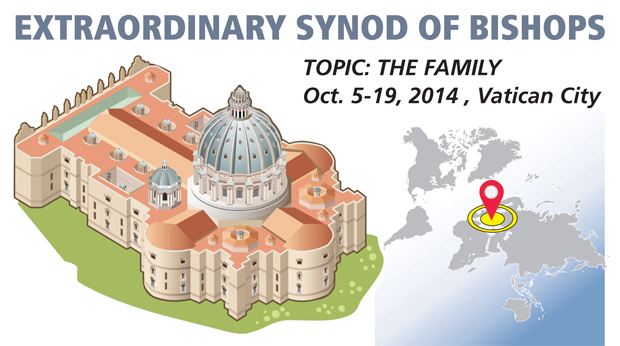 Q. When and where is it?

A. The synod is a meeting of Pope Francis, bishops, clergy and laypeople.

Q. What is its purpose?

A. Pope Francis has written that the synod will discuss the “challenges of marriage, of family life, of the education of children, and the role of the family in the life of the church.” The discussion will be based largely on responses to a questionnaire sent out to the world’s bishops in November 2013.

Q. Who will attend?

A. Approximately 250 people, including the presidents or vice presidents of 114 national bishops’ conferences, 13 heads of Eastern Catholic churches, three superiors general of religious orders, heads of Vatican offices and synod officials, and synod fathers appointed by Pope Francis. They synod also will have nonvoting collaborators and auditors, including married couples appointed by the pope.

Q. What controversial issues will be discussed?

A. Pope Francis has said birth control and the eligibility of divorced and civilly remarried Catholics to receive Communion will be among the topics of discussion. The latter was also a major topic of discussion at a special meeting of cardinals the pope called in February.

A. Italian Archbishop Bruno Forte of Chieti-Vasto, chosen by Pope Francis to be the special secretary of the extraordinary synod, said that the “doctrine of the church is not up for discussion, but rather the discussion will concern improving the ‘pastoral application’ of church teaching.”

Q. Why is it “extraordinary”?

A. The meeting will not reach definitive conclusions but set the agenda for a larger meeting of bishops, to be held at Vatican in October 2015. That meeting will generate proposals for the pope’s approval.

Q. What prompted this synod?

A. In July 2013, Pope Francis told reporters he wanted the gathering to explore a “somewhat deeper pastoral care of marriage,” including the question of the eligibility of divorced and remarried Catholics to receive Communion. 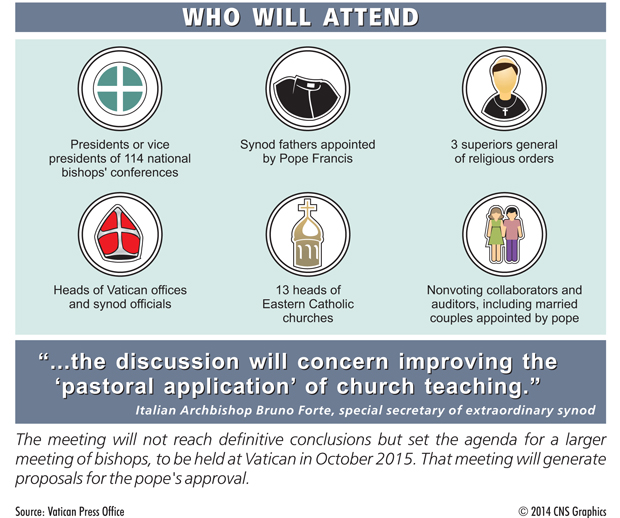