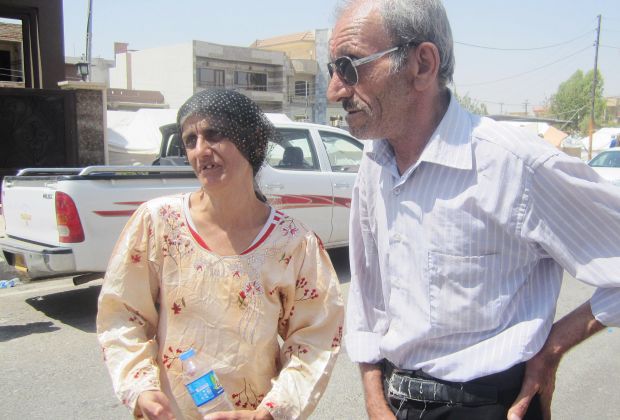 Ayda and Khider Abada discuss with residents of Ankawa, Iraq, Aug. 28 how their daughter was kidnapped by Islamic State militants in Qaraqosh. (CNS photo/Sahar Mansour)

MANCHESTER, England (CNS) — An Iraqi Christian woman has described how her 3-year-old daughter was abducted by Islamist terrorists.

Christina Khider Abada was seated beside her mother, Ayda Abada, on a bus when captors from the Islamic State snatched her and took her away. 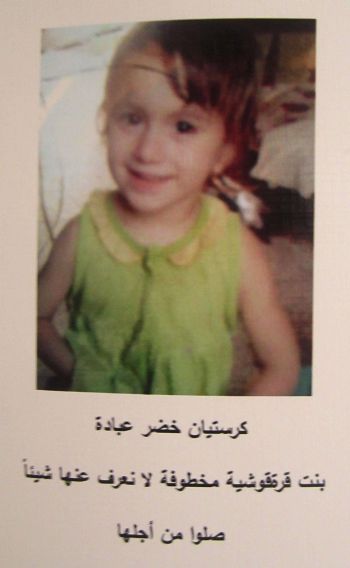 According to an account by the mother, who followed her daughter off the bus, the crying child was passed from one militant to another while Ayda Abada begged for her to be returned.

Finally, the terrorists pointed guns in the face of the mother and told her to get back on the bus or they would kill her.

Fellow refugee Sahar Mansour interviewed Ayda Abada and her husband, Khider Abada, as they circulated pictures of their daughter in Ankawa refugee camp, near Irbil, Iraq, in the hope of gaining information about the toddler’s whereabouts.

In a Sept. 1 email to Catholic News Service, Mansour said the abduction occurred Aug. 24 in the Syriac Christian town of Qaraqosh, Iraq, which had fallen to Islamic State militants the night of Aug. 6-7.

Khider Abada is blind, so the family did not flee their home. They were among 30 Christian families to remain in the town as the fighters arrived.

The Islamic State fighters began to cleanse the town of Christians after about a week, mainly by putting villagers on buses, which were then driven toward Kurdish-controlled territory — but also, according to Amnesty International — by abducting girls and young women.

Ayda Abada said the family was first ordered by the fighters to go to a health center on the pretext of undergoing simple health checks, but they were later robbed of all their possessions and told to board a bus.

In her email, Mansour reported that the mother said she seated Christina beside her, but recalled, “then one of ISIS men came and had a look over the bus and saw my daughter Christina.”

“He took her out of the bus and ISIS man went to the direction of the health center,” Ayda Abada told Mansour.

“Then later, another older man from the terrorists came from the health center and was carrying Christina, and came straight to me and asked me: ‘Is this your daughter?'” Ayda Abada continued.

“I said yes. Both of us, Christina and myself, were crying. I asked them many times that Christina is a little baby and she is innocent, she is just a little baby girl, and I pleaded (with) them and begged his mercy to allow my child to return to me,” she told Mansour.

“I told them that she is very little, (and asked) what kind of crime she had done,” she said. “Then the ISIS men told me in aggressive way: ‘If you want your daughter, we will kill you. Then these men put the gun to my head and with violent tone forced me to get back in the bus.”

She added: “My heart was with my daughter … I do not know how to live without my child Christina, but ISIS men forced me to go back into the bus. All the time my heart and thought were with my daughter, Christina.”

The abduction was included in a Sept. 2 report by Amnesty International called “Iraq: Ethnic Cleansing on Historic Scale: the Islamic State’s Systematic Targeting of Minorities in Northern Iraq” after Ayda Abada spoke to representatives of the human rights group. (See the full report here.)

She also described the abduction of her daughter in an interview with Irbil-based Ishtar TV.

NEXT: Peres: Pope Francis is only leader respected enough to end today’s wars