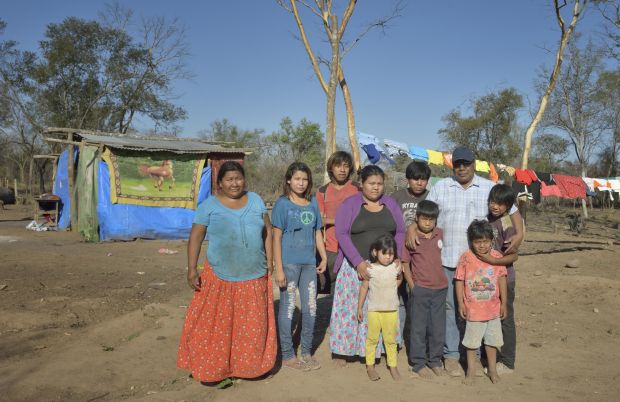 A Weenhayek indigenous family poses for a photo outside their home near Villamontes, Bolivia, Aug. 24. (CNS photo/Paul Jeffrey)

SANTO DOMINGO, Dominican Republic (CNS) — Poverty, violence and changing social norms are causing the disintegration of the family structure across Latin America, church workers in the region said in advance of the October gathering of bishops in the Vatican to discuss pressures families face.

From liberalizing marriage laws and persistent domestic violence to migration trends sending a record number of unaccompanied minors to the U.S. border, the threats to families vary across the region.

“It is abundantly clear that the issues of contemporary family life and marriage deserve special attention from the Catholic Church and from society as a whole,” said Archbishop Jose Ulloa Mendieta of Panama.

In early August, Panama hosted a first-of-its-kind regional congress on family values. Attendees emerged from that conference pledging to strengthen the church’s work in promoting the role of family in society.

In a document published in June, the Vatican said that among those issues, poverty posed a challenge to regions like Latin America, where “the family has to struggle for subsistence, a struggle to which the family has to devote most of its energy.” In other cases, single mothers are living in poverty with small children.

“This phenomenon poses a pastoral challenge, particularly for the churches of Latin America and Asia where, not infrequently, these mothers are forced to entrust the upbringing of their children to other members of their family,” the document said.

Latin Americans said the church should work fastidiously to help families stay together.

“The church needs to be organized in its work through the dioceses to better prepare couples for marriage,” said Dora Ileana de Antillon, who, with her husband, Julio, oversees the department of wedding coordinators for the Guatemalan bishops’ conference. Antillon said the church should work to educate couples and young people about the benefits of marriage and family.

In Brazil, the country with the world’s largest Catholic population, the church seeks to build Catholic communities by holding meetings with five to 10 families every two weeks.

“They share things as a group and as families, turning these communities into support networks of friendship,” said Bishop Joao Petrini of Camacari, president of the family ministry at the Brazilian bishops’ conference.

But getting at the root cause of the threats is more difficult. Underlying many of the issues is persistent and cyclical poverty, said church workers and laypeople working on the issue.

“What I see is one great big huge problem, and it’s a culture of poverty,” said Christine de Marcellus de Vollmer, a former member of the Permanent Observer Mission of the Holy See to the United Nations and current president of Venezuela-based Latin America Alliance for the Family.

Latin American poverty has diminished in recent years as the economies of countries like Brazil and Panama have grown rapidly, lifting millions into the lower rungs of the middle class. But more than a third of the population — 200 million people — currently earns between $4 and $10 per day and sits on the razor’s edge of falling back into poverty, underscoring how tenuous the situation is for families across the region.

As economies have grown, households have had to balance the difficulties of raising families with both parents working.

“The positive side to the movement (both parents working outside the home) is that there is a greater appreciation of the role of women in society; she is no longer just a mother and wife, she is also part of what makes the economy move forward,” said Auxiliary Bishop Sergio de Deus Borges, coordinator of family pastoral ministry for the Archdiocese of Sao Paulo.

However, today, “there is a frailty in family ties; (it is) much easier to separate at the first tough situation the couple gets into,” he said.

“The family is fundamental to the challenges we face in society, whether it be reversing the violence or reducing migration. Preserving the family is key,” Antillon said.

Many of the threats are not new. Since the early decades after Spanish and Portuguese conquistadors colonized the region and created a patriarchal society, “the family structure has always been fairly weak in Latin America,” Vollmer said.

“Colonization left us with a violent system, one in which domestic abuse and violence against women and the poor was common,” said Jose Guadalupe Ruelas Garcia, national director of Casa Alianza Honduras, part of the Covenant House network that works with street children and receives funding from Catholic organizations. “What you see in Latin America today is related to the legacy left by colonization.”

But in recent decades, pressures on the family structure have only intensified as the region has undergone a process of rapid urbanization. The rural, poor family — often reliant on farming — now only represents a fraction of the region’s residents.

Since 1950, the percentage of Latin Americans living in cities has grown from 40 percent to more than 80 percent, making it the world’s most urbanized region. The United Nations estimates that by 2050 nearly 90 percent of the population will live in urban areas.

Urbanization, according to Bishop Petrini, had important consequences for family life.

“Living in a big city, one’s life has several centers, which reduces time the family spends among other family members,” he said.

“On the positive side, urban centers have greater opportunities in terms of culture, activities, jobs, etc. but on the negative side they are points of dispersion” among families, he said.

As a consequence, children in cities like Tegucigalpa, Honduras, where Ruelas works, are often left with little guidance.

“You’ve seen the rise of gangs, after massive deportations from the United States, that have attracted youths and led to violence becoming more commonplace,” he said. Honduras has the world’s highest murder rate; fueled by drug trafficking, gang violence and largely overwhelmed state security forces.

A toxic mix of gangs, poverty and few social opportunities has led young people to flee Honduras and neighboring El Salvador and Guatemala in record numbers. So far this year, more than 60,000 children traveling without family members — the vast majority from Central America — have been apprehended at the U.S.-Mexico border, causing consternation in Washington and highlighting how poverty can tear apart families.

But the plight of tens of thousands of unaccompanied minors this year is only the most visible representation of deep-seated threats to the family structure.

In other areas of the region, such as the Southern Cone, economically well off compared to Central American countries, church workers eye liberalized marriage and abortion laws as the most significant threats.

Mexico City and three South American countries have passed laws legalizing same-sex marriages since 2009, putting the region behind only Western Europe in the number of countries where the practice is permitted.

Archbishop Ulloa, who called the threat to family an “urgent worry” for the church, said that “attempts to redefine marriage will impact the way that people understand family life.”

NEXT: Pope appoints 14 couples to attend Synod of Bishops on family