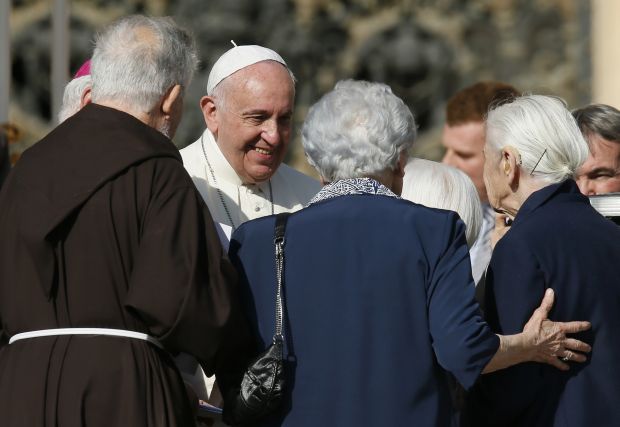 Pope Francis greets people during an encounter with the elderly in St. Peter's Square at the Vatican Sept. 28. (CNS photo/Paul Haring)

VATICAN CITY (CNS) — Pope Francis warned against the abandonment and neglect of the elderly, calling it a “hidden euthanasia” rooted in today’s “poisonous” culture of disposal and an economic system of greed.

In the presence of his predecessor, Pope Francis also thanked retired Pope Benedict XVI for staying to live at the Vatican and being like “a wise grandfather at home.”

“A people who don’t take care of their grandparents and don’t treat them well is a people with no future. Why no future? Because they lose the memory (of the past) and they sever their own roots,” he said.

The pope’s comments came during a special encounter and Mass for older people in St. Peter’s Square Sept. 28. Some 40,000 grandparents, retired men and women, and their families attended “The Blessing for a Long Life” event, organized by the Pontifical Council for the Family. 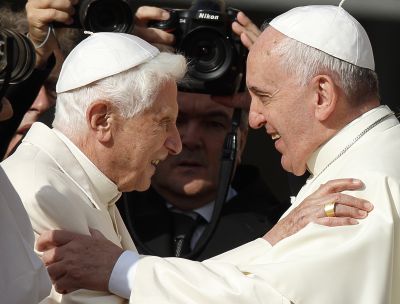 Pope Francis specifically invited Pope Benedict to attend the event, making it the third time since his retirement in 2013 that the German pontiff has made a rare appearance in public with his successor.

Carrying a cane and looking strong, the 87-year-old pope arrived about one hour into the event, which featured music and testimonies from families. About 10 minutes later, while the famed Italian tenor Andrea Bocelli sang “Con te partiro” (“I’ll Go With You”), Pope Francis made his entrance with a small group of families. He immediately went to greet and embrace Pope Benedict, who only stayed for the next hour, leaving before the start of Mass.

Addressing him as “Your Holiness,” Pope Francis thanked the retired pontiff for his presence, telling the crowd, “I really like having him living here in the Vatican, because it’s like having a wise grandfather at home.” 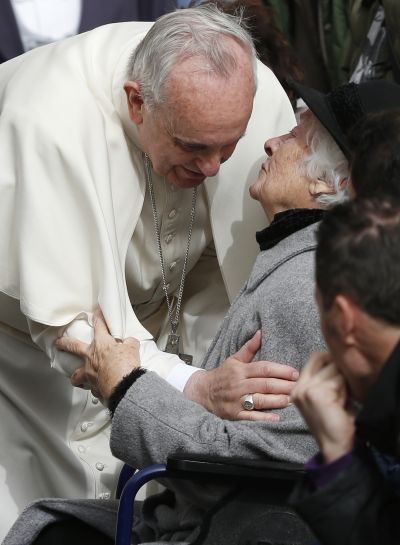 Pope Francis greets an elderly woman in a wheelchair during his general audience in St. Peter’s Square at the Vatican Feb. 19. (CNS photo/Paul Haring)

The wisdom and love of older people are instrumental for building the future, and they can even cheer up grumpy teenagers, the pope said.

“Older people, grandparents have an ability to understand very difficult situations, a great talent. And when they pray about these situations, their prayers are strong and powerful.”

But there are many who instead prey on their fragilities, and the pope warned against the “inhuman” violence being waged against the elderly and children in areas of conflict.

Harm can also be waged quietly, he said, through many forms of neglect and abandonment, which “are a real and true hidden euthanasia.”

People need to fight against “this poisonous throwaway culture,” which targets children, young people and the elderly, on “the pretext of keeping the economic system ‘balanced,’ where the focus is not on the human being but on the god of money.” 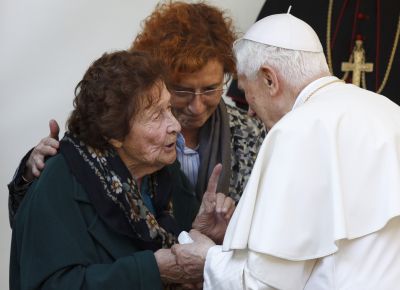 Pope Benedict XVI talks with Enrichetta Vitali, 91, during a visit Nov. 12 to a home for the elderly run by the Sant’Egidio Community in Rome. (CNS photo/Paul Haring)

While residential care facilities are important for those who don’t have a family who can care for them, it’s important these institutes be “truly like homes, not prisons,” the pope said, and that their placement there is in the best interest of the older person, “not someone else.”

These retirement homes should be like “sanctuaries” that breathe life into a community whose members are drawn to visit and look after the residents like they would an older sibling, he said.

The pope also thanked an older couple from Qaraqosh, near Mosul, Iraq, for their presence and urged people to continue to pray and offer concrete aid to those forced to flee from such “violent persecution.”

Married for 51 years with 10 children and 12 grandchildren, Mubarak and Aneesa Hano said they were chased out of their Iraqi town by Islamic State militants.

“The cities are empty, homes destroyed, families scattered, the elderly abandoned, young people desperate, grandchildren cry and lives are destroyed from the terror of the shouts of war,” Hano said.

He said he hoped the world would finally learn that “war truly is insanity.”

Hano told the pope that, for 2,000 years, the bells tolled in their parish churches until the militants invaded the northern Iraqi plain and replaced the crosses on top of their places of worship with black flags. Because the bells no longer ring in these abandoned villages, the bells of St. Peter’s Basilica tolled instead at the end of Hano’s testimony.

Pope Francis then concelebrated Mass with 100 elderly priests from around the world.