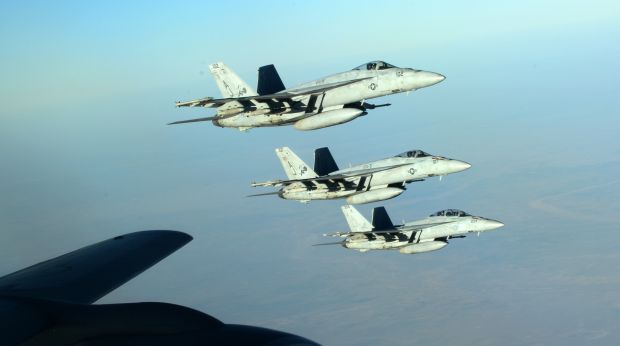 US Navy F-18E Super Hornets make a formation after receiving fuel from a KC-135 Stratotanker over northern Iraq Sept. 23. These aircraft were part of a large coalition strike package that was the first to strike Islamic State targets in Syria. (CNS photo/DoD handout via EPA)

AMMAN, Jordan (CNS) — Ask Syrian refugees sheltering in neighboring Jordan about the advent of U.S.-led strikes against Islamic State militants in their homeland, and the reactions will be mixed.

Some welcome the surprise military intervention, saying it could lead to ending the nearly 4-year-old war in Syria and diminish the power of Islamic State fighters and other terrorist groups operating in the country.

“We guarantee that the war would come to a close in Syria with such involvement led by the American military,” said a Syrian refugee woman, Maysoon, while cradling her 2-year-old daughter. The toddler was born in the Jordanian capital soon after she and her family fled the spiraling violence in Damascus, the Syrian capital.

Maysoon and some other refugees, all of whom asked to be identified without their full names, blamed Syrian President Bashar Assad for turning a “blind eye” to infiltration over the border by foreign militants who make up some of the membership of Islamic State and other extremists. The Islamists have clashed with both secular opposition fighters seeking to topple Assad as well as regime troops loyal to Assad.

“Assad was behind terrorists coming into Syria,” Maysoon alleged. “He opened the borders and allowed these extremists to bring death and destruction into our country.” 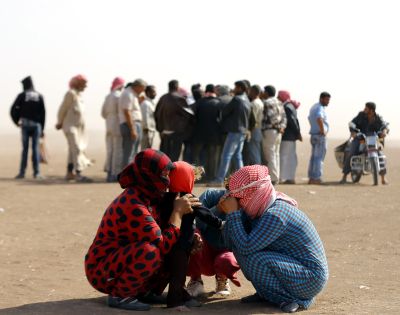 “Our hearts are burning for what has happened to our beloved Syria,” she added, her eyes welling with tears.

Although Abu Reda, a Catholic refugee from Damascus, does not blame Assad for enabling Islamic State terrorists to gain wide control over wide swathes of Syria, particularly in the country’s North, he welcomed U.S. and Arab military intervention to rid the country of what he called “the militant cancer.”

“It’s excellent that the U.S.-led coalition has finally bombed Islamic State targets in Syria,” said the former businessman, who is not permitted to work in Jordan due to his refugee status.

“I only wished that the airstrikes happened sooner. They are what is needed to destroy the extremists that have taken over parts of our country,” said the father of two.

Abu Reda and his family were forced to flee to Jordan about two years ago after he was threatened by Muslim militants with death and his father was kidnapped by the same militants.

“Islamic State and other extremists have systematically targeted Christians and other minorities in Syria, threatening our lives and seeking to forcibly convert us to Islam,” he said.

However, a Sunni Muslim woman, Samar, and other refugees expressed concerns that the U.S.-led intervention could “further complicate Syria’s bloody civil war and lead to more chaos.”

“We are also concerned that innocent civilians will once again become victims as a result of the airstrikes,” said her friend, Sawsan.

“The injustice of the Assad regime helped to give birth to extremism and this has, in turn, weakened the country’s moderate voice, making ordinary Syrians the losers,” Samar said, shaking her head.

Yet, other refugees, half-jokingly, urged the planes bombing Islamic State to attack Assad, too.

Syria’s civil war has no end in sight. It has created more than 3 million refugees sheltering in neighboring countries, such as Jordan, and displaced more than 6.5 million within Syria.

More staggering, according to the United Nations, is the number of deaths resulting from the grinding conflict.

However, Armenian Catholic Archbishop Boutros Marayati of Aleppo said he believes that Christians inside Syria mainly think that the raids “will not solve the problems, and may even increase them.”

“The uncertainty that everyone lives every day increases even more,” he said of the airstrikes in a Sept. 24 interview with Fides, news agency of the Vatican Congregation for the Evangelization of Peoples.

“People here do not have a clear view of what is going on,” Archbishop Marayati said. “But certainly they do not see the perpetrators of the bombings as ‘liberators.'”

Pope Francis’ secretary of state, Cardinal Pietro Parolin, told the U.N. Security Council Sept. 24 in New York that although nations must join together to protect people threatened by violence, terrorism “did not provide license to meet violence with violence.” He quoted St. John Paul II after the 9/11 terrorist attacks and said there must be “respect for moral and legal limits in the choice of ends and means.”

Jordan’s King Abdullah II also addressed the U.N. that same day. The moderate Muslim leader reiterated the importance of Arab Christians remaining in the Middle East even though they, along with other religious minorities, are being targeted by the Islamic State in both Iraq and Syria.

“Arab Christians are an integral part of my region’s past, present and future,” the king told the U.N. General Assembly.

Jordan is participating, along with four other Arab states, in the U.S.-led military intervention in Syria aimed at rooting out Islamic State strongholds. The Jordanian government said its doing so for its own national interests.