Catholic youths urged to service others, ‘shine brighter and brighter’ 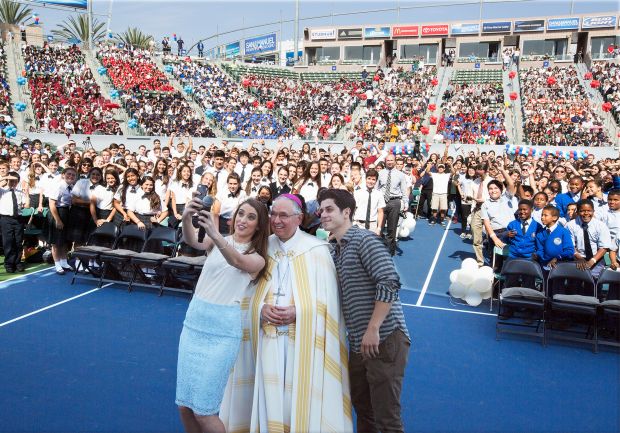 CARSON, Calif. (CNS) — Immaculee Ilibagiza, a survivor of the Rwandan genocide, told a crowd of more than 6,000 junior high and high school students that if she can forgive the person who killed most of her family in the 1994 massacre, then “anybody can forgive.”

“I have gone to the prison to meet the person who killed my family and I offered forgiveness, truly in peace,” she said to the crowd gathered Oct. 14 at StubHub Center in Carson.

Students from 80 schools in Los Angeles, Ventura and Santa Barbara counties participated in a half-day field trip called “Christian Service 4Life,” a joint effort of LIFEsocal, a pro-life group founded by local students and families, and the Archdiocese of Los Angeles’ Office of Life.

The event, designed to inspire the youths to respect all walks of life, included a rally and several speakers in addition to Ilibagiza.

It takes place each October, which is designated Respect Life Month by the U.S. Conference of Catholic Bishops. The theme for the special month this year is “Each of Us Is a Masterpiece of God’s Creation,” inspired by words in a statement Pope Francis issued for the 2013 Day for Life. 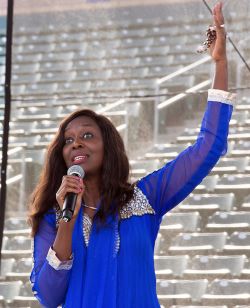 In her keynote address, Ilibagiza described how she stayed hidden for 91 days with seven other women in a small bathroom during the Rwandan genocide.

She recounted the pain she endured after an estimated 800,000 people, including most of her family, were murdered. Rather than succumbing to the rage she felt, she prayed the rosary for solace. Through prayer, she found it possible to forgive and spread the love of God, she said.

Special guests at the event included David Henrie, Mission Viejo-born actor known for “How I Met Your Mother” and “Wizards of Waverly Place”; Maria Cahill, who was Miss Delaware 2011; Walter Hoye II, founder of Issues 4 Life and the California Civil Rights Foundation; Holy Cross Father Wilson D. Miscamble, a professor at the University of Notre Dame in Indiana; and Brittney Sharaun, former “America’s Next Top Model” contestant and founder of Burgers and Bibles.

During the rally, Archbishop Gomez also announced the first OneLifeLA, a family-friendly event embracing the beauty and dignity of all life, will take place Jan. 17, 2015, at Grand Park in downtown Los Angeles.