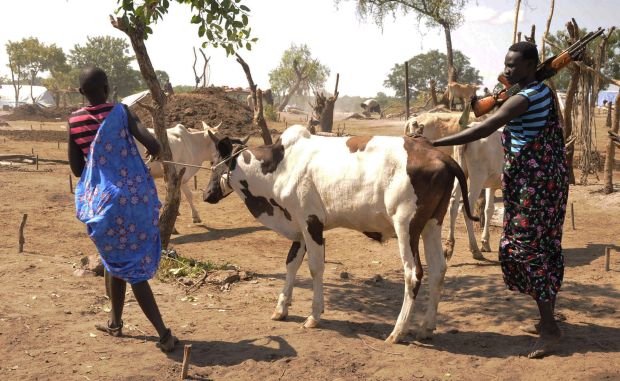 Cattle keepers carry weapons as they lead their cattle home after grazing near Juba, South Sudan, Oct. 18. In a keynote speech Oct. 14 at the Iowa Hunger Summit, Bishop Richard E. Pates of Des Moines, Iowa, said food security is a moral issue and said there is a relationship between food and peace. (CNS photo/Jok Solomon, Reuters)

DES MOINES, Iowa (CNS) — The head of the U.S. bishops’ Committee on International Justice and Peace called food security a moral issue during a keynote address Oct. 14 at the Iowa Hunger Summit.

“Food security and the relationship between food and peace are moral issues,” said Bishop Richard E. Pates of Des Moines, speaking in his own diocese. “In our Christian tradition, we believe that lifting people out of poverty and feeding the hungry are serving Jesus in disguise.”

Bishops Pates, who has served as head of the committee for three years, said, “People who can feed and support their families in dignity are less likely to be engaged in conflict. To build a more stable and prosperous world, we need to adopt policies that get at the underlying causes of conflict and hunger. Conflict increases hunger and hunger increases conflict.”

He added, “It is my hope that you will join me in urging the U.S. government to ensure that poverty-focused international assistance provides adequate funds to support others in building peace and prosperity in our world. In my travels to Africa, Latin America, Asia and the Middle East, I have seen the effects of conflict on hunger, and of hunger on conflict.”

The Iowa Hunger Summit was organized by the World Food Prize, founded by a native Iowan, Norman Borlaug, who won the Nobel Peace Prize in 1970 for his work on reducing world hunger.

This year’s food prize was awarded in Iowa Oct. 16 to a protege of Borlaug’s, Sanjaya Rajaram, a wheat scientist who was born in India and is a citizen of Mexico. He has bred 480 varieties of wheat to provide nutritious grains resistant to rust disease and adaptable in a vast array of climates, thus helping protect the global food supply and feed more people.

“Violent conflict is development in reverse. It destroys all the hard-won progress in human development and sets people back decades,” Bishop Pates said, giving examples around the world.

Last December in South Sudan, whose people won independence in 2011 after a civil war with Sudan resulted in 2 million deaths, “the political infighting turned violent and exploded into civil war that has killed some 10,000 people and displaced 1.3 million,” Bishop Pates said. “An estimated 4 million people don’t have enough food to feed their families; famine could strike hundreds of thousands.”

Visiting Colombia last year, he added, “I heard firsthand accounts of the terrible conditions faced by farmers and their families at the hands of FARC guerillas and other paramilitaries. Often farmers were forced to grow illicit crops, such as coca. It can only be hoped that the current peace negotiations to settle the conflict in Colombia, which are being energetically supported by the Catholic Church in that country, will bear rich fruit.”

A new threat to peace and food security, Bishop Pates said, is land-grabbing, which he described as “the purchasing or leasing of large tracts of land by international investors that often violate the civil and land rights of the poor farmers who own or work the land.”

Before winning independence, “South Sudan leaders signed land deals that handed over 12.7 million acres of land to outside investors. That amounts to over 8 percent of the South Sudan’s total land mass, an area twice the size of Vermont,” Bishop Pates said. “An extensive report by the Oakland Institute shows that none of the farmers was consulted during these transactions. People lost their land rights and often were not compensated.”

He added, “The phenomenon of land-grabbing is occurring across Africa where foreign companies, investment firms and governmental sovereign wealth funds take advantage of countries where corruption is rampant and where land tenure laws are underdeveloped and disfavor poor landholders.

“In 2011, the (U.N.) Food and Agriculture Organization issued voluntary guidelines and acceptable practices on the responsible governance of land tenure issues. If African countries, international private companies and donor nations implemented these guidelines, the land tenure abuses or land grabbing would cease.”

As a result, Bishop Pates said, an FAO estimate put the number of people living with hunger at 805 million. “The vast majority of the hungry lives in the developing world. Hunger rates are highest in Africa where more than 25 percent are chronically hungry.”

Bishop Pates quoted Pope Francis: “It is a scandal that there is still hunger and malnutrition in the world! It is not just a question of responding to immediate emergencies, but of addressing altogether, at all levels, a problem that challenges our personal and social conscience, in order to achieve a just and lasting solution.”