R U texting in church? Put the phone down! 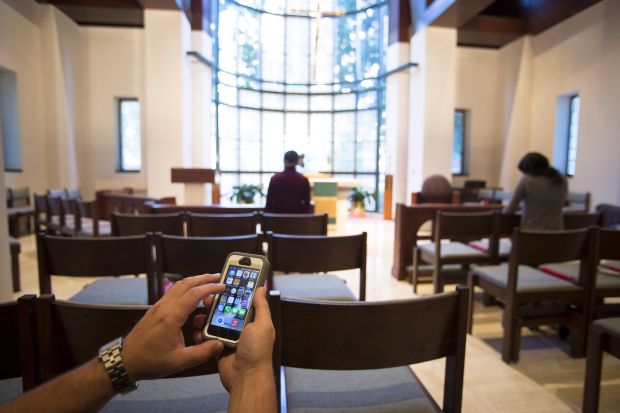 This photo illustration shows someone using a cellphone inside a Catholic chapel in Washington Oct. 27. With cellphones everywhere -- at family meals, in the classroom and at sporting events -- it is no surprise they are at church, too. (CNS photo/Tyler Orsburn)

It’s no surprise that cellphones affect even church.

It has become common for parishes to place blurbs in their bulletins about silencing cellphones and for lectors to make announcements about it before liturgies, reminding parishioners they’re in a place of worship.

In some places, Massgoers heed the notices — with a few exceptions for people who work in emergency fields or don’t understand how to silence their phones. At other parishes, ringtones, texting or even taking calls during liturgies can distract the priest and the people in the pews.

Dorothy Sokol, parish life director at Our Lady of Grace Parish in Ballston Lake, N.Y., notices phones ringing and worshipers texting at Mass, despite signs in two different places and announcements cautioning against it. She said some people don’t know they’re offending people, but she’s distracted by it, especially when parents let toddlers play electronic games on their phones.

Some parishioners use a tablet or smartphone to follow along with the readings for Mass, and “there’s a place” for that, she said.

As for texting, “people have to be conscious that they’re in church to pray with a community and to try, if possible, to put the distractions away,” Sokol told The Evangelist, Albany’s diocesan newspaper.

She’s not sure how to handle teenagers she’s seen texting repeatedly.

“What do you say?” she wondered. “Do you give the teenager grief when the parents are sitting right next to them and not saying anything? The last thing I want is for them to stop coming. You have to figure out what’s best. Unfortunately, asking, ‘What would Jesus do?’ isn’t a good question” — the Son of God never had a cellphone.

Father Richard Carlino, pastor of St. John the Evangelist and St. Anthony parishes in Schenectady, N.Y., calls himself a “strong endorser of silencing the cellphones.” People cooperate for the most part, but some don’t hear the announcements at the start of each Mass.

“It throws my whole concentration off” when a phone rings during Mass, Father Carlino said. But “I don’t think they do it maliciously.”

In recent months, he’s also had to talk to parishioners about texting — which he considers less distracting than a ringing phone, but “still a distraction from what they’re supposed to be doing in church. Their mind is not on the Lord. There are exceptions, but the exceptions should be few.”

On the other hand, “I’m happy they’re there, even if they’re doing stuff they shouldn’t be.”

Father Thomas Holmes, pastor of St. Henry Parish in Averill Park and St. Mary Parish in Nassau, gets so frustrated by poor technology etiquette at Mass that he joked about installing an electric dog fence around the churches — or at least a signal scrambler.

“Almost every weekend, somebody’s cellphone goes off during Mass, oftentimes during the consecration,” he said. “I often laugh, and it’s a sarcastic laugh. I’ve said a couple of times, ‘You’ve got to be kidding me.’ I think they should be embarrassed.”

There’s a sign on the door of St. Henry’s asking those who enter to turn their phones off. Father Holmes was puzzled and disappointed when he noticed someone had crossed out the words.

“It’s disheartening,” he said. “There’s no reason for anybody to have their cellphone on in church.”

He has spotted teenagers and young adults texting at Mass, but hasn’t confronted anyone. Texting only distracts him if he notices it, but he still wishes it didn’t happen at all in church.

“I’ve watched people walk into telephone poles while they’re texting, so it doesn’t surprise me” that it’s hard to turn off the technology, he said. “People are attached. I’ve had parents tell me that their kids text each other while they’re sitting next to each other on the couch.

“Overall, I think people should have a little more sense when it comes to their cell phones. They forget why they’re (at church). It’s only an hour of their life.”

Andrea Freeman, office manager at St. Matthew’s in Voorheesville, N.Y., saw someone texting at a wake, but said otherwise it doesn’t happen there often.

At Christ Our Light Parish in Loudonville, phones generally aren’t a problem, though a ringer did interrupt Deacon Dick Thiesen, the parish life director, once as he proclaimed the Gospel. He’s also seen parents texting during their children’s confirmations.

Cave is a staff writer at The Evangelist, newspaper of the Diocese of Albany.