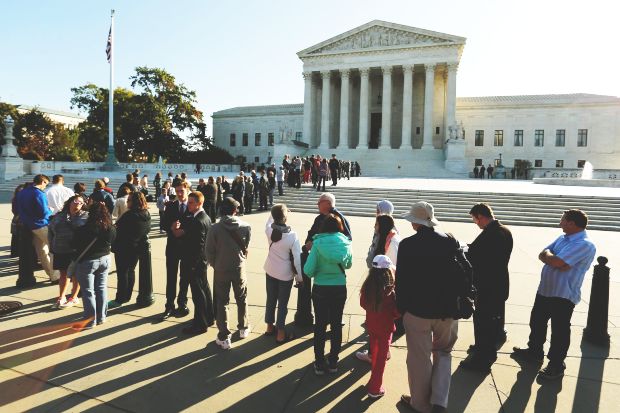 Visitors stand in line for oral arguments on the first day of the term of the U.S. Supreme Court in Washington Oct. 6. Rulings that overturned state bans on same-sex marriage in five states will be allowed to take effect, after the court declined to consider appeals of lower court rulings that such prohibitions are unconstitutional. (CNS photo/Jonathan Ernst, Reuters)

WASHINGTON (CNS) — Rulings that overturned state bans on same-sex marriage in five states will be allowed to take effect, after the Supreme Court Oct. 6 declined to consider appeals of seven lower court rulings that such prohibitions are unconstitutional.

Another half-dozen states in the same appellate court jurisdictions also are likely to begin allowing such marriages. But the high court’s refusal to hear the cases does not translate to a nationwide mandate for all states to follow them.

The action effectively allows same-sex marriages to begin in Indiana, Oklahoma, Utah, Virginia and Wisconsin as soon as lower courts lift temporary stays that were imposed while appeals went to the Supreme Court.

Six other states within the same three federal circuit court jurisdictions would fall under those appellate rulings and likely also will begin allowing such marriages, bringing to 30 the number of states that allow same-sex couples to wed.

Within hours of the Supreme Court orders being released, the 10th U.S. Circuit Court of Appeals lifted the temporary stay on its rulings, which overturned same-sex marriage bans in Utah and Oklahoma. The other cases that now revert to lower court rulings are from the 4th Circuit and the 7th Circuit. Virginia Attorney General Mark Herring said county clerks could begin issuing licenses that same day.

In 89 pages of orders issued the first day of the court’s 2014 term, the court rejected appeals in seven cases in which federal courts had said laws prohibiting same-sex marriage were unconstitutional. The cases included a mixture of state constitutional amendments and legislation that banned same-sex marriages, as well as appeals by couples who were married in other states and sought recognition of their unions by the states where they live. The court issued the orders without comment.

The justices’ decision not to take up any of the cases came as a surprise to legal observers. The high court typically does not take up cases with nationwide implications unless there are conflicting lower court rulings. But in each of the seven marriage cases, both the winning and losing sides had asked the court to review the lower court decisions, to help clarify the overall situation.

When the Supreme Court justices consider whether to take a case, it takes four votes to put an appeal on the docket. Four justices dissented from the 2013 rulings that overturned the federal Defense of Marriage Act, which defined marriage as between one man and one woman. After the U.S. v. Windsor ruling, attorneys general in some states declined to defend their bans on same-sex marriage, while others vigorously fought to keep them intact.

The U.S. Court of Appeals for the 5th, 6th, 9th and 11th circuits all have same-sex marriage cases on the docket. The Supreme Court’s decision not to take up the cases gives the appellate courts little new information on which to base their rulings, so it’s possible that a split between circuits could still develop.

While supporters of laws allowing same-sex marriage hailed the result of the court’s decision to bypass the cases, some opponents called on Congress to act.

A statement from the chairmen of two committees of the U.S. Conference of Catholic Bishops said they were disappointed that the court didn’t take up the cases.

“All of these state laws were democratically enacted, including most by the direct vote of large majorities within just the last decade,” said the Oct. 6 statement from Bishop Richard J. Malone of Buffalo, New York, chairman of the Committee on Laity, Marriage, Family Life and Youth, and Archbishop Salvatore J. Cordileone of San Francisco, chairman of the Subcommittee for the Promotion and Defense of Marriage. “Millions of Americans had looked to the court with hope that these unjust judicial decisions might be reversed.”

“The Supreme Court’s action fails to resolve immediately the injustice of marriage redefinition, and therefore should be of grave concern to our entire nation,” the bishops said.

While Catholic teaching opposes discrimination against homosexuals, the church holds that homosexual acts are always immoral and that marriage can only be a union between one man and one woman.

In a teleconference Oct. 6, Ted Olsen, former U.S. solicitor general and now attorney for the Virginia couple who sued for the right to marry, said the court’s decision not to take up any of the cases means a faster track to more states permitting same-sex marriages. Had the court accepted any of the seven cases, it would have meant a final ruling from the Supreme Court would likely come in the spring.

On the same teleconference, attorney Jon Davidson of Lambda Legal said the court’s decision to pass this round might mean that although four justices would have voted to accept one or more cases, they didn’t want to risk the uncertainty about whether there might be a fifth vote to overturn or uphold the lower courts. That outcome, said Davidson, might have meant same-sex marriage would become legal nationwide in one ruling.

The Family Research Council, which also opposes same-sex marriage, said in a statement from president Tony Perkins that the court’s action is “in part, an indication that those on the court who desire to redefine natural marriage recognize the country will not accept a Roe v. Wade type decision on marriage.”

Perkins called on Congress to advance a bill called the State Marriage Defense Act, “which is consistent with last year’s Windsor ruling and ensures that the federal government in its definition of marriage respects the duly enacted marriage laws of the states.”