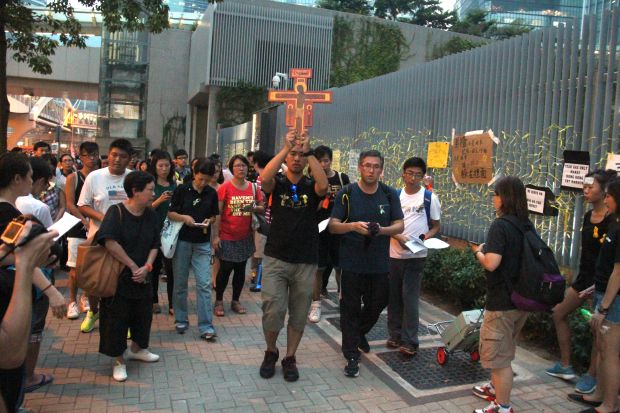 HONG KONG (CNS) — The two cardinals in Hong Kong urged the government to solve the present political deadlock after police used force to disperse thousands of unarmed protesters who struggled for full democracy in the city.

Cardinal John Tong Hon of Hong Kong called upon the government to ensure the personal safety of people and “exercise restraint in the deployment of force with a view of listening to the voice of the younger generation and citizens from all walks of life.” He issued a statement Sept. 29, the day after police used 87 pieces of tear gas to disperse students and the protesters who were concerned with Chinese restrictions on elections.

Later, in a telephone interview with America magazine, he said: “Nothing like this has happened in Hong Kong before. I’m just praying that it won’t become like Tiananmen, the situation is similar in many ways. We must pray this does not happen!”

Hong Kong, which reverted to Chinese rule in 1997, is a special administrative region of China and is governed by the Basic Law, a mini-constitution, which grants Hong Kong more freedoms than other parts of China. Protesters are angry that the government in Beijing said it would vet candidates for chief executive in the 2017 election.

After police broke up the protests Sept. 28, the local bar association criticized what it called the excessive use of tear gas as unjustified. It said it had “unnecessarily aggravated public feelings of resentment and frustration.”

Tens of thousands of people protested each day in different spots, and thousand slept overnight on streets. Several churches, including the Catholic, Methodist and Anglican parishes, open their facilities to support protesters, while many Christians organized prayer sessions at the demonstration zones.

PREVIOUS: Pope: Drop the melodrama, pray for strength, for those truly in pain

NEXT: Pope: Tiny voice in your head? Don’t ignore it; it’s a guardian angel