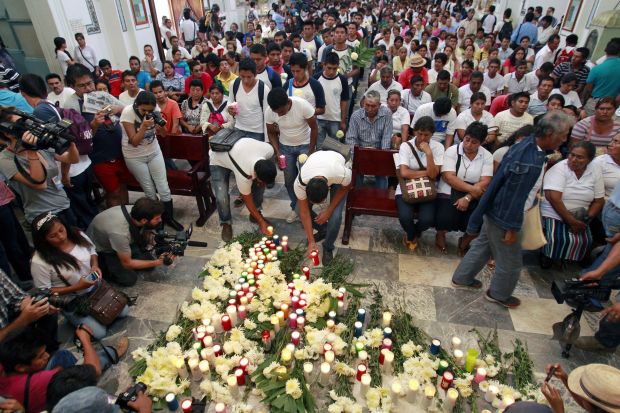 MEXICO CITY (CNS) — Bishops in the southern state of Guerrero asked federal and local officials to prioritize finding 43 missing teacher trainees, who authorities allege were detained by crooked cops and delivered to members of a drug cartel.

In a letter issued Oct. 15, the bishops outlined an increasingly bleak security situation in Guerrero, which unfolds to the south of Mexico City and has been battered by dueling drug cartels and local authorities corrupted by organized crime.

“The frightening statistic of more than 12,000 homicides since the year 2007 makes us think that the case of Iguala is a demonstration of what has been everyday life in recent years,” said the letter signed by Archbishop Carlos Garfias Merlos of Acapulco and Bishops Alejo Zavala Castro of Chilpancingo, Dagoberto Sosa Arriaga of Tlapa and Maximino Martinez Miranda of Ciudad Altamirano.

“In addition to the homicides, there are thousands of victims of kidnaps, forced disappearances, forced displacements, extortions and threats are some of the most comment forms of violence that we suffer,” the bishops said.

The teacher trainees’ Sept. 26 detentions and disappearances showed the seriousness of insecurity in many parts of Mexico, even as the federal government attempts to promote the country abroad as open for business and brimming with economic opportunities.

It also again showed the scant progress some states have made in purging police forces of members acting in cahoots with criminals and the problem of politicians aligning themselves with drug cartels and gangs — as was alleged to have happened in Iguala, the Guerrero city where the students went missing.

“The fact that there may have been police forces and the authorities acting prominently in this painful case makes us think about the need to put the maximum attention on the political violence factor,” the bishops said in the five-page letter.

“The authorities responsible for the security and well-being of the population are acting against the public interest and (this) obligates us to ask for a strong effort to clean up public institutions that are affected by the cancer of organized crime.”

The case of the students has caused outrage across Mexico and abroad, while classmates of the missing continue protests, including burning government buildings. The students attend a college for training rural teachers and have been at odds with the state government over funding and job guarantees.

“What we’re living in Guerrero is pain and suffering, above all,” said Father Mario Campos Hernandez, a priest in the La Montana region of Guerrero.

“It goes beyond the normalistas” — as the teacher trainees are known — “this most recent event is what’s been transcendent because they’re young people.”

The students were abducted in Iguala, 120 miles south of Mexico City, where they went to collect funds for a trip to the capital. The circumstances of the disappearance are still uncertain, but Mexican Attorney General Jesus Murillo Karam said police from two municipalities confessed to handing the students over to a criminal gang, known as Guerreros Unidos.

Mass graves containing 28 charred remains were found in Iguala shortly after the disappearance, but Murillo said DNA tests showed the victims were not the students. More than 800 federal police and soldiers were working on resolving the case, he said.

Since the late-September incident, Iguala Mayor Jose Abarca has been disowned by his own political party, and his whereabouts remain unknown. Abarca’s family has been tied to organized crime.

The situation in Guerrero, long one of the poorest in Mexico with impoverished and isolated indigenous communities and constant corruption and human rights abuses, has come into focus for the church.

“Guerrero is another warning light that federal authorities did not want to see,” read an Oct. 5 editorial in the Archdiocese of Mexico City publication Desde La Fe.

“It is the reflection of the latent danger of living in a country like Mexico, with serious internal problems of ungovernability, insecurity, corruption and fear in distinct regions, where no one can say that it is safe, not even the promoters of peace and justice,” it said.

The church in Guerrero has supported victims of violence through programs providing personal attention. It also has worked in communities wiped out by Hurricane Manuel, which hit hard in September 2013.

In their letter, the bishops promised to do the same in the case of the disappeared students.

“We continue praying for all the deceased and disappeared,” they wrote. “For those in pain, we offer comfort and the hope of faith, trusting in the strength we receive from Mary, Our Lady of Guadalupe.”

NEXT: Terrorism in Mideast has reached ‘unimaginable proportions,’ pope says