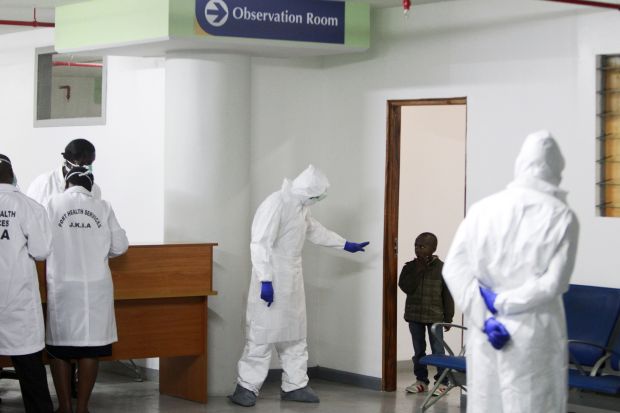 A Kenyan Port Health Services worker wearing full personal protective equipment commands a small boy, who is among nine Kenyans who were stranded in the Ebola-hit country Liberia, to return to an observation room for Ebola screening, as they arrive at Jomo Kenyatta International Airport Oct. 28 in Nairobi, Kenya. During his weekly general audience Oct. 29, Pope Francis urged prayers and international action to fight the Ebola virus. (CNS photo/Daniel Irungu, EPA)

VATICAN CITY (CNS) — Pope Francis pleaded for the international community to take stronger, coordinated steps to “annihilate” the Ebola virus and help the millions of people impacted by the disease.

“As the Ebola virus epidemic worsens, I want to express my deep concern for this relentless illness that is spreading particularly on the African continent and especially among populations that are already disadvantaged,” the pope said Oct. 29 at the end of his weekly general audience.

Pope Francis offered his prayers and solidarity with the sick, as well as with the doctors, nurses, volunteers, religious orders and humanitarian agencies working “heroically to help our sick brothers and sisters.”

“I ask you to pray for them and for all who have lost their lives,” the pope said.

The day before the pope’s appeal, Caritas Internationalis — the umbrella organization for Catholic charities around the world — announced it would hold a special meeting in Rome Nov. 4 to coordinate ways to increase the work Catholic charities are doing in response to the epidemic, especially in West Africa.

“At this point, it’s not only about preventing Ebola. We’re also called to care for the thousands of healthy people who were already poor, who have no access to healthcare for other illnesses and whose lives have been turned upside down by this crisis,” said U.S. Msgr. Robert J. Vitillo, the Caritas health adviser.

“This is a shattering emergency. We need to strengthen the response of Caritas and our collaboration with other Catholic Church organizations as quickly as possible. Our brothers and sisters cannot wait,” Msgr. Vitillo said.

The priest also said the organizations would discuss ways to “respond to the global reactions of panic and of stigmatizing that are directed at West Africans, migrants from the region, and even at returning health care volunteers.”

The World Health Organization reported Oct. 25 that “10,141 confirmed, probable and suspected cases of Ebola virus disease have been reported” in Guinea, Liberia, Mali, Sierra Leone, Spain and the United States, as well as previously in Nigeria and Senegal, where the disease reportedly has been contained. As of Oct. 23, the report said, 4,922 of those infected had died.

Catholic Relief Services, the U.S. bishops’ overseas aid agency and a member of Caritas Internationalis, announced in late September that it has committed more than $1.5 million to anti-Ebola efforts in West Africa.