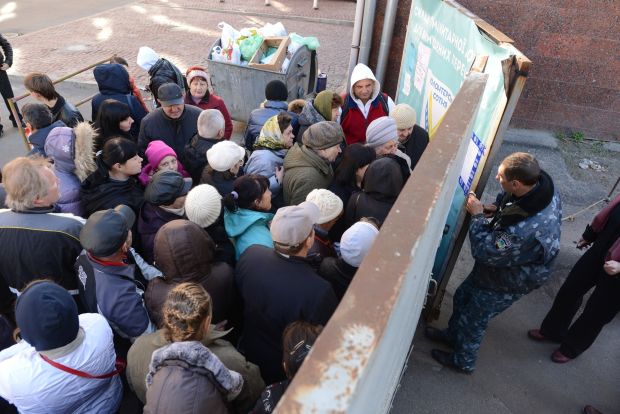 KIEV, Ukraine (CNS) — The Ukrainian capital enjoyed an Indian summer in early October, but the temperatures dropped dramatically in the middle of the month, making residents gasp and catching displaced people completely unprepared.

At an ad hoc aid distribution center Oct. 19, people who had fled their homes in the Donetsk and Luhansk regions of Eastern Ukraine lined up early in the morning to be among the first allowed inside to go through piles of donated coats, scarves and clothing. Two young mothers, seeing a volunteer pass a box of disposable diapers through the donation window, pleaded for the box, certain that by the time they got inside the abandoned construction site the diapers would be gone.

Standing quietly at the back of the line, Elena, a petite dark-haired, blue-eyed woman from Donetsk, said she and her 10-year-old daughter had come to the center the day before as well. The “Volunteer Hundred,” a group formed during the Maidan demonstrations earlier in the year, hands out food on Saturdays and clothing and household goods on Sundays.

The young woman, who asked that her last name not be used, recounted her blessings: The Donetsk family whom she served as a nanny owns a small apartment in Kiev and is letting her and her daughter stay there. Her husband has gone back to the conflict zone because of widespread accounts of pro-Russian rebels confiscating or destroying abandoned homes and apartments.

While Russia and Ukraine signed a cease-fire in mid-September, skirmishes continue, and Elena’s husband has been unable to find a way to send money; but, she said, at least the telephones are working again and they are able to speak regularly on the phone now.

As Elena waited outside the large metal gates, chained and padlocked, another displaced person from the East who said his name was Viktor helped donors unload their cars. An elderly man and his wife brought six sacks of winter squash; a newer SUV pulled up and, when the luggage pod on top was opened, Viktor helped unload a “gently used” baby stroller and several duffle bags filled with clothing.

“I’m a volunteer not because I am in a better position, but because we must first help the mothers with young children and the elderly,” said the 48-year-old from Luhansk, the other region where fighting continues. Wearing a red baseball cap with a small Canadian maple leaf on it, he said he and his wife had found a room in a “low-class hotel” for about $15 a night. He said he wanted to join the army, but since he cannot see well enough to drive, he was not accepted.

For Andriy Waskowycz, president of Caritas Ukraine, Elena’s and Viktor’s stories are all too familiar. The United Nations and other humanitarian organizations estimate there are more than 415,000 internally displaced people in Ukraine and another 427,000 who have left the country seeking peace.

A surprising number, such as Elena, have been given apartments rent-free, but utilities and food still cost money. Others found refuge in summer camps or spas, which have no heat and will not be appropriate through the long, cold Ukrainian winter. Partnered with the U.S. Catholic Relief Services and Caritas partners in Austria, Poland, Germany and Italy, Caritas Ukraine is providing direct assistance to 6,400 internally displace people.

Until a year ago, Waskowycz said, Caritas Ukraine was running a home health care program, programs for at-risk children and youths and was lobbying parliament on behalf of Ukraine’s poorest and neediest citizens. When invited to seminars on emergency crisis management, he said, he always responded that the only emergency Ukraine ever had to deal with was flooding, and they handled that well enough.

“Our whole agenda has changed,” he said Oct. 20 during a meeting with reporters in his Kiev office.

First Caritas helped provide food, hot tea and clothing to the “pro-dignity” protesters on Kiev’s Independence Square, now commonly referred to as Maidan. When the government of former President Viktor Yanukovych attacked the protesters — first in December, but especially in February when about 100 were killed — physicians and other medical personnel from Caritas Ukraine joined the volunteer medic squads that even ran clandestine hospitals.

After Yanukovych fled the country, Russia annexed Crimea, and the fighting began in Eastern Ukraine. For Caritas Ukraine, the past year has been a time of gearing up its emergency response capabilities thanks to the support of other members of the Caritas Internationalis network, he said.