Human and economic impact of climate change studied at Villanova 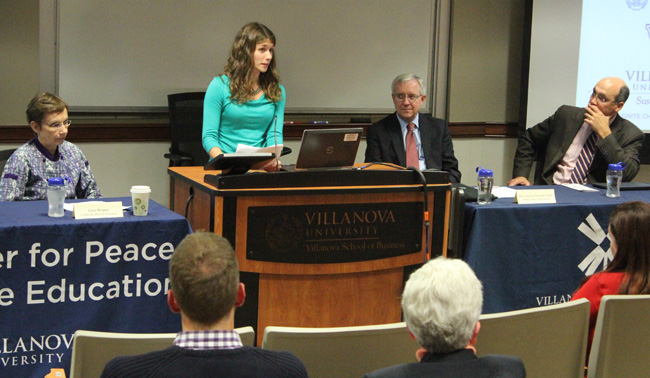 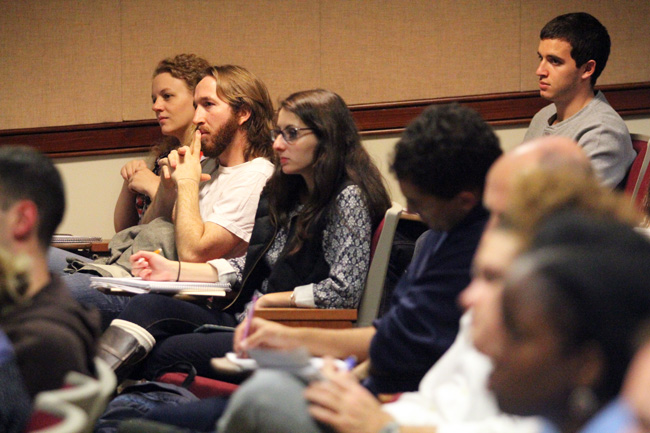 Villanova students and other guests listen to the presentations.

Close to 40 people gathered at Villanova University Tuesday night, Nov. 11, for the “Faith and Environment Panel: Empowering the Care of Creation” in which three speakers discussed climate change in relation to faith, national security and poverty.

Daniel J. Misleh, the executive director of the Catholic Climate Covenant, alerted his audience to the church’s mission to care for creation. Misleh said he initially learned about climate change through his oldest child, and the subject interested him enough to study it further.

In 1990 Pope John Paul II issued a statement on climate change for that year’s World Day of Peace. The Catholic bishops of the United States also made comments on the subject in 2001 by emphasizing prudence and focusing on the environment’s effects on poverty.

“It’s not new teaching,” Misleh said, “at least not on the environment.”

In his talk, Misleh said the poor usually provide the least carbon footprint yet endure the effects of climate change the most.

Ken Fleischer, who teaches a class titled “Faith, Reason and Culture” at Villanova, attended the talks and invited his students to write a paper on environmental ethics. He called climate change an ecological challenge. 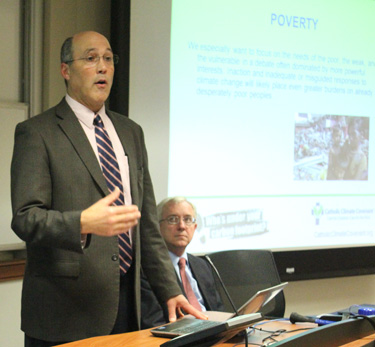 Dan Misleh of the Catholic Climate Covenant speaks about Catholic teaching on climate change, the environment and global solidarity.

“It’s one of the issues that concerns me as an individual citizen of the planet,” said Fleischer, a member of St. Peter’s Episcopal Church in Great Valley, Chester County. “I’ve watched the impact. I’m concerned we’re leaving (the world) in worse shape than better.”

Rear Admiral David Titley, the founding director of the Center for Solutions to Weather and Climate Risk at Penn State University, spoke in his talk about the environment’s effect on national security.

Titley said his military superiors initially asked him to get educated on the issue.

“If your boss is interested,” he said, “you are fascinated.”

The retired admiral, who said he is just one of a few senior military officers involved in climate change, noted the issue often appears “complex and abstract” but it’s important nonetheless because people can make a difference in the field.

He used animated graphics and charts to emphasize rising global temperatures. Due to escalating sea levels, Titley noted 3.7 million people in the United States are within three feet of high tide.

He said melting ice in the Arctic Ocean causes concern for the United States because other nations might attempt to claim waters and surrounding lands in the future, impacting the United States’ claims in Alaska.

Gaye Burpee, Catholic Relief Services’ senior adviser on climate change and rural livelihoods for Latin America and the Caribbean, spoke about climate change’s effects on agriculture in Central America. She said crop yields for maize and beans are expected to decrease because of climate change, caused by rising temperatures and less water for irrigation.

Liesel Schwarz, the sustainability manager for Villanova University and organizer for the panel discussion, said much talk today in the United States focuses on the economy but more emphasis should be put on the environment and its effect on the economy.

“We’re so insulated because of how developed we are,” Schwarz said.

Charlie Dugan, another attendee who has been interested in the topic for 15 years, said the seminar presented a lot of new information. He thought Burpee’s talk gave a detailed study.

Dugan said the seminar presented “good ideas on things that can be done to mitigate the effort of climate change on the poor.”

Brendan Monahan is a freelance writer in Plymouth Meeting and may be contacted at bmonahan16@gmail.com. 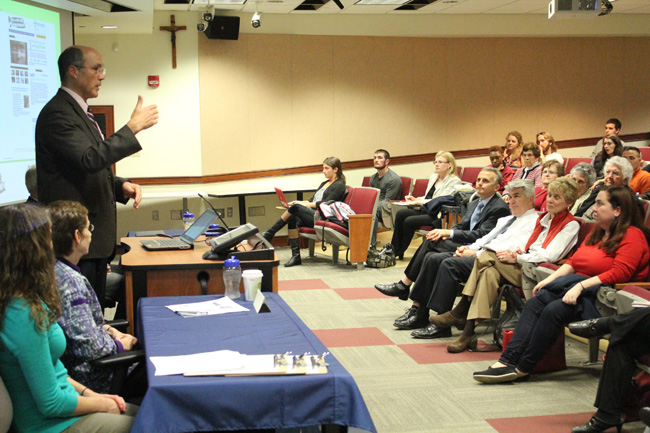