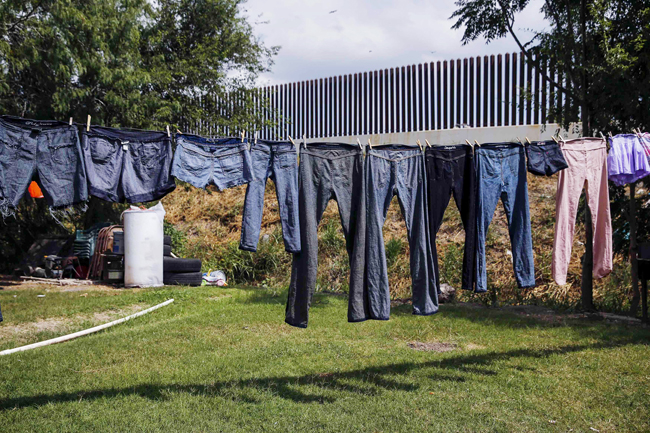 Clothes dry in the backyard of a home facing a U.S.-Mexico border fence near Brownsville, Texas, Aug. 5. U.S. and Central American leaders continue to work on approaches to address the situations driving Central Americans to seek refuge in the U.S. (CNS photo/Shannon Stapleton, Reuters)

WASHINGTON (CNS) — As millions of immigrants celebrate the possibility of protection from deportation under a new Obama administration plan, among those who cannot take advantage of it will be the 68,445 families and 68,541 unaccompanied minors who were apprehended at the border in the last fiscal year.

The children and families, most from Central America, drew international attention last summer as their numbers overwhelmed governmental and private agencies that process their legal cases, and provide housing, social services and foster care. The record-setting number of apprehensions has declined significantly because of efforts on both ends of the migrant pipeline. And steps are being taken to address problems in their home countries that cause people to leave.

Not an option for them, however, will be the program unveiled by President Barack Obama Nov. 20. It will apply only to long-term residents of the United States, estimated at something under half of the 11 million people in the U.S. without legal immigration status.

A week before Obama’s announcement, Vice President Joe Biden was meeting with the presidents of Guatemala, Honduras and El Salvador about how to tackle the situations affecting people in their countries. In a program at the Inter-American Development Bank, Biden and the Central American presidents talked about ways to address economic, social, governance and security conditions that contribute to people’s decisions to leave for other countries.

Among the steps agreed to at the meeting, as the White House announced them, were:

— Promoting trade between Central American and North American markets, including with a $277 million compact between the U.S. government’s Millennium Challenge Corporation and El Salvador for projects dealing with “investment climate,” education and infrastructure.

— Collaboration between the U.S. Department of Justice and Central American counterparts on professional responsibility in the criminal justice systems, including police, courts and corrections agencies.

In addition, Biden announced the U.S. in December will open a program in Honduras, Guatemala and El Salvador that will allow at-risk children to apply for refugee status from within their home countries, avoiding the dangerous and costly trip across Mexico to enter the U.S. illegally. Normally, applications for refugee status are handled in countries other than where the applicant lives.

The programs opening in December will, according to Biden, allow parents who have lawful immigration status in the U.S. to apply through the Refugee Admissions Program for their minor children who still live in El Salvador, Honduras or Guatemala.

Bill O’Keefe, vice president for government relations and advocacy for Catholic Relief Services, lauded the announced steps, but said there also need to be better efforts to protect vulnerable people, especially children, in the short term.

In a statement, O’Keefe said the long-term economic and civic strategy “is critical to address the root causes of the economic, social, and political crises in Honduras, El Salvador and Guatemala.”

But, he added, “for far too long, children and youth have borne the brunt of these crises.”

CRS has long experience throughout Central America and helps operate programs such as gang deterrence and youth job training in some of the most crime-ridden places.

O’Keefe said the CRS philosophy is that “for any investment to provide the opportunity that children and youth in Central America deserve, it must interrupt violence and include targeted poverty eradication.”

He noted that “the most dangerous places tend to be urban areas and the poorest places are usually rural areas,” so tackling both requires “a two-pronged approach that addresses the needs of those communities that suffer high levels of violence, and provides real opportunities to remote, impoverished communities.”

“Economic success in Central America will be measured in job creation, educational improvements and school attendance and strengthening of families,” he said.

Since the summer’s peak numbers of unaccompanied minors and families with children being caught at the border, federal agencies have found more detention center space for those it keeps in custody. And the children on their own who remain in the United States have largely been placed with family members around the country while awaiting processing of their deportation cases.

Although nearly all of those 68,541 minors were caught in Texas, only about 6,200 of them ended up staying in the state. The Office of Refugee Resettlement in the Department of Health and Human Services is responsible for their care, and typically places them with relatives if at all possible.

Meanwhile, a detention center for families hastily opened in Artesia, New Mexico, earlier this year will close before January, The Associated Press reported.

The jail-like facility had space for about 700 people and was where many mothers with young children were sent while awaiting immigration court proceedings. The AP quoted Artesia Mayor Phillip Burch as saying 448 Central American mothers and children had been released from the center in the previous six weeks. Twenty-eight were deported. Another 450 people being held there as of mid-November were to be released or sent to other family detention centers in Texas or Pennsylvania.

A new 2,400 bed family detention center, operated by the Corrections Corporation of America, will open in Dilley, Texas, in December, according to Immigrations and Customs Enforcement.

Silky Shah, co-director of the organization, said “family detention is an abusive and inhumane practice that erodes family bonds and undermines children’s well-being.”

Shah said it’s also troubling that the Corrections Corporation will run the Dilley center, calling it “a company known for its human rights violations at countless facilities, including the T. Don Hutto Detention Center (in Texas) which stopped holding families after reports of the appalling treatment and conditions for children in custody.”