Institute officials outline alternatives to in vitro for infertile couples 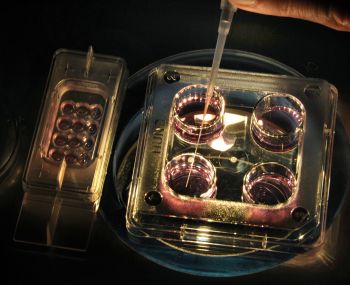 A culture vessel is injected with culture liquid at a Leipzig, Germany, center for assisted reproductive technology in this July 2011 photo. The Pope Paul VI Institute in Omaha, Neb., reports that more effective options exist for infertile couples than in vitro fertilization. (CNS photo/EPA)

DAVENPORT, Iowa (CNS) — For couples struggling to conceive a child, in vitro fertilization has been a medical standard for the past 30 years.

The Catholic Church has long opposed the process as immoral because it separates conception from the marital act and it destroys embryos.

With the procedure’s prevalence in the medical world, some Catholic couples are led to believe they are out of medical options after a doctor recommends it.

But officials from the Pope Paul VI Institute for the Study of Human Reproduction in Omaha, Nebraska, say in vitro fertilization, or IVF, is not a miracle procedure and they report that more effective options exist.

Dr. Kristina Pakiz, associate medical consultant, said couples “do not have to feel trapped in a corner where they are told they will never have a child without in vitro fertilization. The truth is that there is superior gynecologic health care available to them.”

She said IVF has a success rate of about 30 percent and increases the risk of high-risk pregnancy and birth defects. About five in six embryos created in the process will die. IVF does not address root causes of infertility; only a detailed workup that helps doctors diagnose and treat infertility as the product of an underlying condition can do that. When infertility is seen as an underlying medical condition and treated accordingly, success rates for conception increase.

Dr. Karla Polaschek, medical director for Women’s Choice Center in Bettendorf, Iowa, and pro-life OB/GYN practitioner at Medical Arts Associates, in Moline, Illinois, said many doctors are aware of alternative treatments and procedures but may be skeptical or less comfortable with them.

Additionally, she said IVF is part of a profitable industry. Treatments cost $10,000 or more and medical research companies depend on donated embryos — with the parents’ permission — for research.

Jamie Rathjen, director of Fiat FertilityCare Center in Cedar Falls, Iowa, said she suspects that there is more money to be made in treatments such as IVF than solutions that treat the underlying condition. She also conducted a survey of 15 Cedar Falls-area doctors and most said that such treatments were not emphasized during medical school training.

Rathjen, an advocate for procedures that diagnose and treat the underlying issue, told The Catholic Messenger, newspaper of the Diocese of Davenport, that doctors tend to be receptive to church-approved methods and technologies once they understand them as viable options. Three Cedar Falls-area medical professionals are now seeking additional training.

These alternative treatments often utilize natural family planning, or NFP, methods to chart fertility cycles and detect problems. Beth Budelier, NFP teacher and member of St. Paul the Apostle Parish in Davenport, explained that it is common for couples with low or marginal fertility to conceive within six months of learning this method.

For women who do not ovulate or have other issues that cannot be detected or confirmed through charting fertility signs alone, ultrasounds and hormonal testing can be useful. Treatments can range from a healthy diet to fertility-enhancing medications such as clomiphene and letrozole to reparative surgery.

Still, she said, some couples may not be able to conceive even with the most statistically effective treatments, depending on their condition and age. Statistically, women are seeking motherhood past the age of declining fertility, but IVF does not offer a viable solution. The Society for Assisted Reproductive Technology reports a success rate of less than 5 percent for a 42-year-old woman.

Anything that helps to increase a couple’s natural fertility — as opposed to replacing it or creating life outside of the body — is acceptable in the church. Father Thom Hennen, a Davenport theologian and diocesan vocations director, said that couples are welcome to try what is permissible, all the while being open to whatever life may or may not come.

“At all times there has to be an abandonment to God’s will,” he added.

Polaschek recommends that Catholics seeking infertility treatment familiarize themselves with treatments acceptable to the church and resist being persuaded into using illicit treatments.

Even if a doctor is not explicitly pro-life, he or she may know of alternative methods or be able to make a referral. If a doctor does not respect the couples’ wishes, they can look for a new doctor or call the Pope Paul IV center for referrals, she said.

Steele writes for The Catholic Messenger, newspaper of the Diocese of Davenport.