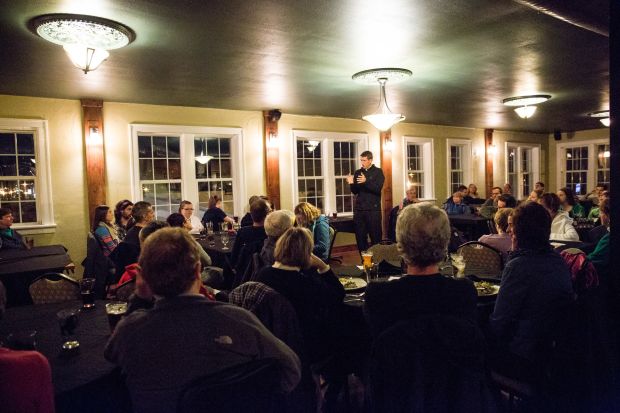 Earlier this year, Baer, a pastoral associate at Blessed Teresa of Calcutta, and members of the Ferguson parish’s Engaged Church Committee had been brainstorming ideas to help engage the Catholic community beyond church walls.

A theology-on-tap-type event was proposed. Something to get young people talking about faith issues in a social setting. The St. Louis suburb’s historic district would be a perfect setting to execute the idea.

And then Ferguson happened.

Suddenly, the Brewhouse Theology series was needed more than ever. The first, Nov. 11 at the Ferguson Brewing Company, drew about 60 people of all ages, well more than organizers had hoped for. Father Christopher Martin, director of the archdiocesan Vocations Office, spoke about navigating rough waters by practicing the cardinal virtues.

“This is just about bringing people together to just be together and to hang out, have fun,” said Baer. “It’s important with what we’ve been through.”

Father Martin said that much of the conversation about what’s happened in Ferguson has been centered on a desire for justice. And that’s good, he said. But “we can’t have one cardinal virtue without the others.” All four of those virtues — prudence, justice, temperance and fortitude — must be practiced together.

“We want a just society on all accounts,” Father Martin said. “How do we pursue justice? I’ll be honest with you, a lot of the things I have seen on television, and even some of the conversations I have had with other ministers of different denominations, I would deem imprudent. It doesn’t look like they’re going down the path, or doing actions that are going to obtain the good which (they’re) actually desiring. (They’re) actually stopping short, so to speak, for publicity. And publicity is not the good that you’re striving for.”

Father Martin said that society makes a grave mistake if we say that every young black man is a criminal, just as we make a grave mistake by saying that every police officer is a bigot. “It’s not that simple, because we’re dynamic human beings,” he said.

In this instance, St. Louis Archbishop Robert J. Carlson has called for a conversion of heart. That means we can’t go up against the police as if they’re all the problem, said Father Martin. “True fortitude stands up and says we need to prescribe against the evil that exists in all of our hearts on both sides. And to know it’s not something that’s a matter of policy that’s going to be able to overcome this. It’s actually something much deeper and innate in each one of us.”

In the conversation about Ferguson, people have asked, “‘Where is the archdiocese?’ What the archbishop desires,” said Father Martin. “is not just the social reform, but the conversion of heart.”

As the people of St. Louis waited for the grand jury’s decision in the Michael Brown shooting case, Father Martin said it was natural for people to want to respond to the decision.

“But our actions should not be dictated by what the grand jury says. In trying to start on this course (of exercising virtue) we can’t be detoured by this flash in the pan,” the priest said. “Our call is to be virtuous and do what God has desired of us. He’s planted those tools inside us. Freedom is not the ability to do what we want, but the ability to do what we ought.”

In August the fatal shooting of 18-year-old Brown, who was black, by Ferguson Police Officer Darren Wilson, who is white, gave rise to weeks of protests, violence in the streets, and looting and vandalism of Ferguson businesses.

A St. Louis County grand jury has been looking into whether charges should be filed against Wilson, and its decision was expected by the end of November. The teen was unarmed, but police say Brown struggled with Wilson before the officer fired.

Activists have threatened violent protests if the grand jury does not determine the officer should be brought up on charges. On Nov. 17, Missouri Gov. Jay Nixon declared a state of emergency and activated the National Guard to assist local and state police in the event of civil unrest.

Effie Wolfsberger, 90, likely the oldest one to attend the Brewhouse Theology event, said she was supportive of those who want to publicly demonstrate the need for justice in the Brown shooting case. “I think it’s wonderful — keep it up,” she said. “But none of that violence. Instead of hearts of stone, we need to have hearts of love. I hope there’s going to be a change.”

Elizabeth Lonero, a Blessed Teresa parishioner who helped bring the Brewhouse Theology series to her father-in-law’s restaurant and brewery, said she and others have been describing Ferguson as if it were an island, with those outside of the island afraid to go there after witnessing the violent scenes shared in the media.

“We are still here, we’ve always been here,” she told the St. Louis Review, the archdiocesan newspaper. “I tell people come help us out, because the island is fabulous.”

“This is our God, this is our home, and we’re going to continue to be here,” she said.