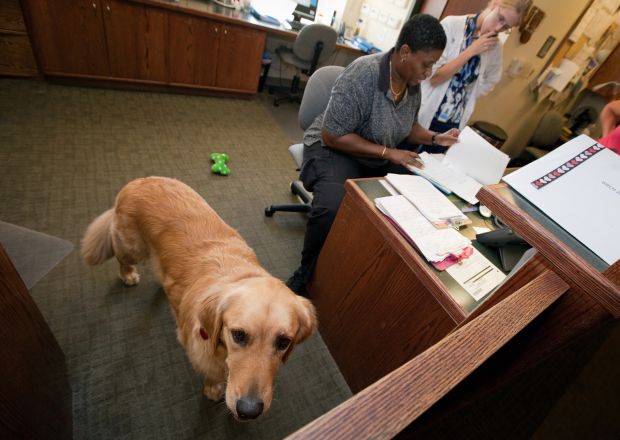 In this Sept. 6, 2012, file photo, Ivan takes a break at the nurses' station in the Center for Compassionate Care in the Mount Lebanon area of Pittsburgh. The full-time service dog sees to both patients and staff in the palliative care unit. (CNS photo/Nancy Phelan Wiechec)

ALBANY, N.Y. (CNS) — The sacrament of the anointing of the sick is just one way priests and chaplains can minister to the dying and their families.

They — along with others in pastoral care ministry — can also pray, sing, read Scriptures, counsel, help with arrangements and mediate conflicts.

They even grant final requests. One patient at Our Lady of Mercy Life Center nursing home in Guilderland, for example, expressed a lifelong desire to see a certain play. Marie Venaglia, the Catholic chaplain, rented a DVD from the library and played it for her.

After residents die, the center holds a service for family, staff and visitors. It also has periodic memorial services.

“It’s another form of closure, another way to talk about how (the bereaved are) doing,” Venaglia told The Evangelist, newspaper of the Albany Diocese. “Death is a natural process. We can speak freely about it. It’s not all medical. The pastoral ministry here is all incorporated into the whole care.”

She and other Catholics who encounter death on a regular basis recently reflected on pastoral care of the dying, God’s presence at a deathbed and their common experiences in patients’ final hours.

The anointing of the sick — which Venaglia described as “a blessing showing that the whole church is united in praying for this person at this time in their life, not just a death” — is offered every six weeks and as needed.

“I just try to be a presence to people, try to encourage (families) to take care of themselves, (because) when the death happens, there will be a lot of demands,” Venaglia said. “I reassure them of our support and help them take the next step as they go through the preparations. I’m there for regular prayer with them and encourage them to go to the chapel.”

She sits with residents to hold their hands, pray and answer questions.

“I’m there to reassure them that it’s going to be OK, that we’ll take care of their family,” she said. “It’s real scary, and it’s part of my job to acknowledge, ‘You might be scared. Let’s try to put it in God’s hands.’ Sometimes it’s just repeating one prayer over and over, having people gather to say the rosary in the room.”

She described death as “a very natural process for most people. They just stop breathing and it’s a sense of calm that happens then. You stay with the resident after they’ve passed and pray and bless them on their new journey. Out of respect for that person, I try to keep a continued presence with them.”

Father John Kelly, director of spiritual care services at Albany Memorial Hospital, said half of the patients listed as Catholic don’t practice their faith. He has seen interest in anointing of the sick drop dramatically since he started 28 years ago; back then, even nonpracticing Catholics sought the sacrament.

“I don’t argue or try to persuade,” he said. “Sometimes, my role is just a matter of a religious aura. My goal is whatever the patient wants. A parish priest looks at the patient through the eyes of religion and his ultimate goal is to help them get to heaven.”

One patient Father Kelly encountered secretly had two families, who discovered one another at his deathbed. All of them then abandoned him.

“He was totally alone facing death,” the chaplain recalled. “He processed it and we worked together and he died a beautiful death. He fully accepted responsibility for his life and fully accepted the forgiveness of God and really enjoyed the presence of God in his final hours.”

He added, “It’s more just taking each person as they are and being there for them. I’ve experienced God’s presence helping me to help the person. Sometimes the right thing to say just comes out of the blue.”

Shafi Thomas has been a Catholic chaplain at St. Mary’s and Samaritan hospitals in Troy and St. Mary’s Healthcare in Amsterdam, where he is currently spiritual care director. He believes visions are “a sign that the patient is kind of willing to die, has no fear, knows that his life is not going to end, that it’s a transition.”

Before they get to that point, Thomas’ patients “react in different ways: Some people can accept it easily (and) some people question it and wonder if doctors did everything.

“The most effective (thing) for me is just listening because there is no right or wrong answer. I just say, ‘I hear you; I understand; I know you’re going through a difficult time,” he said. “I don’t defend God in this situation. God is right there and my presence being a chaplain is also, in a very strong way, representative of God.”

He often leads this prayer with families: “We forgive you. We ask your forgiveness. We love you. God loves you. We thank you and we say goodbye.”

Final moments and the way families cope can vary, according to Father John Tallman, who is a chaplain at Our Lady of Mercy Life Center, St. Peter’s Hospital and St. Peter’s Nursing and Rehabilitation Center in Albany and the Albany Fire Department.

“Most people have never seen anybody die,” Father Tallman said. “Sometimes it’s easy and sometimes it’s really hard to watch. Some struggle to breathe, and other times it’s very peaceful and they just slip away.”

Some individuals are at peace; some are terrified. A prerequisite for peace, Father Tallman said, is belief that “there is life on the other side of this world. I tell them they have nothing to be afraid of and everything will be all right. They have to put their trust in God.”

Father Tallman said being around the dying for decades has inspired him “to be more patient, more appreciative of life; (to) try to always acknowledge the goodness of other people instead of looking at their faults and failures.”

Miraculous events also lift his spirits. One time, a fireman’s infant was given a grim prognosis.

“I baptized the baby, and almost immediately, he got better,” Father Tallman said. “There’s a lot of stuff that happens to me on a daily basis.”

Cave is a staff writer at The Evangelist, newspaper of the Diocese of Albany.

NEXT: Rally with Thanksgiving theme last-minute plea for immigration order