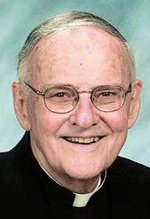 “We would look his way when he said things,” Bishop DeSimone recalls. That trait would remain evident during Msgr. Howard’s years in high school administration and as rector of the cathedral, the bishop remembers.

“When we bishops would gather there we always took pleasure in his exchange of ideas with Cardinal (John) Krol. He had his opinions and the two would go back and forth. The cardinal enjoyed that,” Bishop DeSimone said, and called Msgr. Howard “a great priest.”

Msgr. Howard was ordained May 10, 1952 at the cathedral by Archbishop John F. O’Hara, and his first assignments were as parochial vicar at St. Mary Parish, Beaver Meadows; St. Francis de Sales, Lenni and Our Lady of Angels, Philadelphia.

Immaculate Heart Sister Frances D’Alessandro grew up in Our Lady of Angels, and Father Howard became a close and lifelong friend to her family to the point of being family.

“He was a young priest, very active and aware of the needs of the children,” she remembers. “He had a great influence on me because of his dedication to the church, his kind manner and his compassion. That gave me the idea of serving the church, and he has always been an inspiration to me in my religious life. When I entered, he brought me to the convent.”

Msgr. Howard also taught at Msgr. Bonner High School and he was appointed to the faculty of Cardinal Dougherty High School, successively as teacher, vice principal and principal.

Father Paul M. Kennedy was a student at Dougherty in those years.

“That was the time Cardinal Dougherty had 6,000 students and he went from being the disciplinarian to being the principal and he made the transition very smoothly. He had the good of the school at heart, and was a great supporter of Cardinal Dougherty after that; he was proud of his years there. He was a great story teller and always had a smile,” Father Kennedy said.

His years as rector of the cathedral which followed were eventful, and included a visit by Blessed Teresa of Calcutta in 1974, the 41st International Eucharistic Congress in 1976 and the visit of St. John Paul II in 1979.

But the cathedral is also a parish and Lou Ferrero, a lifelong parishioner, remembers Msgr. Howard as “the boss,” who was very hands-on but fiercely independent.

“He knew what needed to be done and relied on many volunteers to accomplish it,” Ferrero said. “He wanted to be your friend, and he worked with the families, keeping them in the church. I had a fraternal relationship with him, a love for him.”

Msgr. Howard’s funeral Mass will be celebrated at his beloved cathedral by Archbishop Charles J. Chaput at 11 a.m. on Wednesday, Nov. 5. The Mass will be preceded by a viewing. Concelebrants of the Mass will include Bishop DeSimone, Msgrs. Joseph C. McLoone, Robert T. McManus, James E. Mortimer and William J.J. O’Donnell; Father David B. Machain and Father Kennedy, who will be the homilist.

Actively participating at the funeral will be members of the Police, Fire and Peacekeepers League of the Sacred Heart, of which he was spiritual director for 41 years, according to Police Captain Lou Campione, who is the group’s current chaplain.

“He loved the League of the Sacred Heart and he took care of our spiritual needs,” Campione said. “He counseled us, gave advice to parents and rode along on patrols with us.”

Msgr. Howard is survived by a cousin, Joan, and by Sister Frances.

Interment will be at Calvary Cemetery, Pottsville.

NEXT: Franciscan sister dies, served mostly as a teacher for 67 years