Break down isolation and stigma of autism, pope says 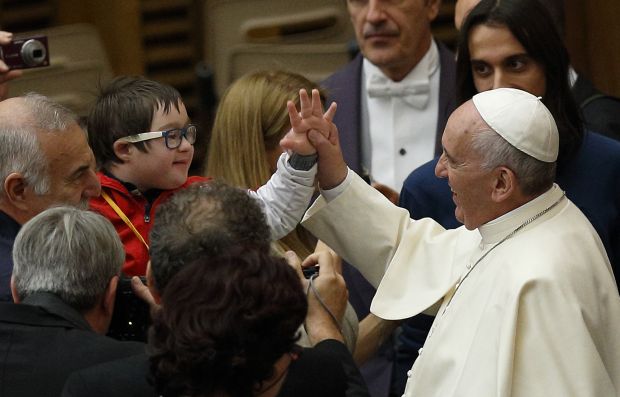 Pope Francis greets a child during an audience with people who have autism in Paul VI hall at the Vatican Nov. 22. (CNS photo/Paul Haring)

VATICAN CITY (CNS) — Pope Francis called for greater acceptance of people with autism spectrum disorders and their families to break down the “isolation” and “stigma” that burdens them.

“Everyone should be committed to promoting acceptance, encounter and solidarity through concrete support and by encouraging renewed hope,” the pope said Nov. 22 during a meeting with people with autism disorders, also known as ASD, and their families, and with 700 participants in a three-day conference on autism and related disorders, organized by the Pontifical Council for Health Care Ministry.

Pope Francis called the daily challenges for people with autism spectrum disorders and their families “a cross” and noted the need to develop more “comprehensive and accessible” support networks.

The accompaniment of people with autism and their families must not be “anonymous or impersonal,” he stated. Rather, it must involve “listening to the profound needs that arise from the depths of a pathology which, all too often, struggles to be properly diagnosed and accepted without shame or withdrawing into solitude.”

The pope said support networks should extend to include “grandparents, friends, therapists, educators and pastoral workers,” who “can help families overcome the feelings that sometimes arise of inadequacy, uselessness and frustration.”

He thanked families, parish groups and various organizations for the care they provide people with ASD, noting that such care is the “direct responsibility” of governments, institutions and Christian communities. He concluded by encouraging researchers in their work of discovering treatments and therapies to help cure and prevent the disorders.

NEXT: Pope urges Europe to nurture religious roots, sow peace in its borders