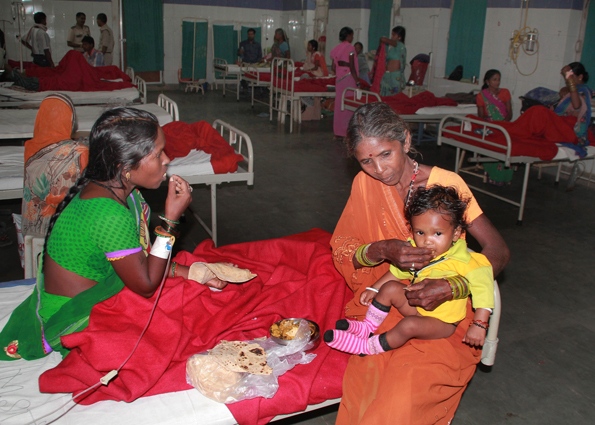 Women who had sterilization operations lie on hospital beds in Bilaspur, India, Nov. 12. The church in India has expressed shock over the death of more than a dozen young mothers in government-run sterilization camps in central Chhattisgarh state. (CNS photo/EPA)

THRISSUR, India (CNS) — The church in India has expressed shock over the deaths of more than a dozen young mothers in government-run sterilization camps in central Chhattisgarh state.

“This is terrible,” Archbishop Prakash Mallavarapu, chairman of the health care commission of the Catholic Bishops Conference of India, told Catholic News Service Nov. 12 from his Visakhapatnam Archdiocese.

“It is not enough to punish the guilty responsible for this shocking tragedy. The systemic faults behind this tragedy must be exposed and corrected,” said Archbishop Mallavarapu.

While 12 of the 83 poor village women who underwent free government sterilizations at a private hospital in Bilaspur Nov. 8 died of subsequent medical complications after being sent home, local government officials said at least 20 more women were critical and were being treated in different hospitals.

Following the national furor over the rising deaths from the botched surgery, police have registered criminal charges against half a dozen health officials, including senior Dr. R.K. Gupta, who performed more than 80 sterilization surgeries, more than double the limit for one day.

Archbishop Mallavarapu said poor people’s lives “should not be treated so cheaply.”

“What is the motive behind such sterilization camps? Is it for the need of the people or to meet the sterilization targets of the government?” he asked.

NEXT: Pope calls for global defense of Christians facing persecution