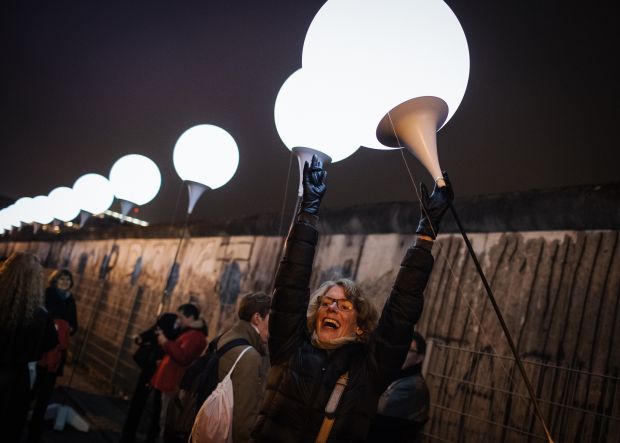 A woman celebrates as she awaits the release of balloons into the sky along the former path of the Berlin Wall in Berlin Nov. 9. Commemorating the 25th anniversary of the fall of the Berlin Wall, Pope Francis said the sudden end to the division of Europe was prepared by the prayers and sacrifice of many people, including St. John Paul II. (CNS photo/Roman Pilipey, EPA)

VATICAN CITY (CNS) — Commemorating the 25th anniversary of the fall of the Berlin Wall, Pope Francis said the sudden end to the division of Europe was prepared by the prayers and sacrifice of many people, including St. John Paul II.

After reciting the Angelus prayer Nov. 9 with visitors in St. Peter’s Square, Pope Francis spoke about the 25th anniversary of the wall coming down, a wall “that for so long cut the city in two and was a symbol of the ideological division of Europe and of the entire world.”

“The fall was sudden, but it was made possible by the long and hard commitment of many people who struggled, prayed and suffered for it, some even sacrificing their lives,” the pope said. St. John Paul II, he said, had “a role as protagonist” in the change.

During his lifetime, the Polish-born pope refused to claim personal credit for the collapse of communism in Eastern Europe, but he knew his preaching and his support for human dignity and freedom energized the forces for change, particularly in his homeland.

In a 1993 interview, Pope John Paul said, “I think the crucial role was played by Christianity itself: its content, its religious and moral message, its intrinsic defense of the human person. All I did was recall this, repeat it and insist on it.”

Pope Francis, commemorating the wall’s fall, asked Catholics to pray that “with the help of the Lord and the collaboration of all people of good will, there will spread even more a culture of encounter capable of bringing down all the walls still dividing the world.”

The pope also prayed for an end to “innocent persons being persecuted and even killed because of their creed or religion.”

“Where there is a wall,” he said, “there is a closed heart. We need bridges, not walls!”