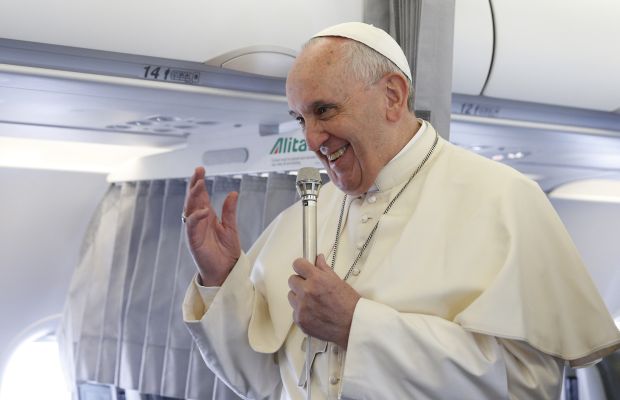 Pope Francis greets media aboard the papal flight from Rome before arriving to speak at the European Parliament in Strasbourg, France, Nov. 25. (CNS photo/Paul Haring)

ABOARD THE PAPAL FLIGHT FROM STRASBOURG, France (CNS) — Pope Francis said he would “never close the door” on dialogue with the Islamic State in an effort to bring peace to a region of the world suffering from violence and persecution.

He also said that “terrorism” could describe not only the actions of such extremist groups but also those of some national governments using military force unilaterally.

Meeting reporters Nov. 25 on his return flight from Strasbourg where he addressed the European Parliament and the Council of Europe, Pope Francis said terrorism is a threat the world must take seriously.

Specifically asked if he thought there was even the most remote possibility of dialoguing with terrorists like those from the Islamic State, Pope Francis said, “I never count anything as lost. Never. Never close the door. It’s difficult, you could say almost impossible, but the door is always open.”

But Pope Francis also told journalists that the threat of terrorism is not the only horror weighing on the world.

“But there is another threat, too,” he said, the threat of “state terrorism,” when tensions rise and an individual nation decides on its own to strike, feeling it has “the right to massacre terrorists and with the terrorists many innocent people fall.”

Nations have a right and duty to stop “unjust aggressors,” he said, but they must act in concert and in accordance with international law.

A Spanish reporter asked Pope Francis about a man from Granada, Spain, who wrote to the pope about a priest who sexually abused him. The correspondence set off a widespread police investigation, the arrest of three priests and a layman, and the suspension of several priests by the Archdiocese of Granada in November.

The pope said he received the letter. “I read it and I phoned the person and I told him, ‘Go to the bishop tomorrow,’ and I wrote to the bishop and told him to get to work, conduct an investigation,” he said.

Pope Francis said he had read the letter “with great pain, the greatest pain, but the truth is the truth and we must not hide it.”

Another journalist asked the pope about his remarks at the Council of Europe that in audiences at the Vatican he has noticed differences between young politicians and their older peers. “They speak with a different music,” the pope told reporters. No matter what countries or which political parties they belong, the young seem “to not have fear of going out of their own group to dialogue. They are courageous. And we must imitate this.”

“This going out in order to find and dialogue with others — Europe needs this today,” he added.

Another reporter told the pope that his remarks at the European Parliament on employment, the dignity of human life and the role of the state in helping citizens made it seem like the pope could be a card-carrying member of the Social Democrat Party.

“I don’t want to label myself on one side or another,” the pope said, and, besides, “this is the Gospel.”

While many reporters and pundits have tried to pigeon-hole the pope’s politics, he said, “I have never distanced myself from the social teaching of the church.”

NEXT: First world day against human trafficking set for February