Praying for the dead, pope asks special prayers for victims of war 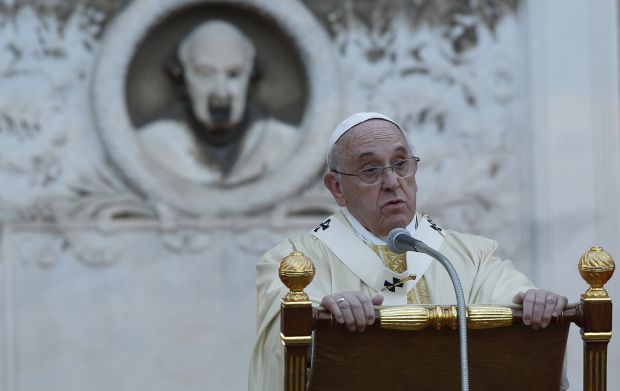 Pope Francis gives the homily as he celebrates Mass at the Verano cemetery in Rome Nov. 1, the feast of All Saints. (CNS photo/Paul Haring)

VATICAN CITY (CNS) — The early November feasts of All Saints and All Souls call Catholics to contemplate their ultimate destiny, hope in the eternal happiness of their beloved dead and remember the thousands of innocent people dying each day because of human evil and selfishness.

Because human beings believe they are gods and the lords of creation, they discard the poor, the old and the young, they wage wars and persecute those who do not believe the way they do, Pope Francis said Nov. 1 as he celebrated an evening Mass at Rome’s Verano cemetery.

The pope told thousands of people gathered amid the tombs that before Mass he noticed a plaque commemorating the 1943 Allied bombing of the cemetery and thought, “That’s nothing compared to what is happening today.”

As winter begins in the Northern Hemisphere, he said he was thinking of the thousands of people forced to leave their homes and flee to the desert, living “in tents, feeling the cold, without medicine, hungry” because of those who believe they are god. The pope presumably was talking about the situation in Syria and Iraq where Islamic State fighters continue to drive people from their homes.

God has given his children a blessing, the pope said: “hope. The hope that he will have pity on his people, that he would have pity on those who are in the midst of the ‘great tribulation'” described in Revelation 7:14.

The Beatitudes — Blessed are the poor in spirit, blessed are the peacemakers — is the only path “that will lead us to an encounter with God,” he said. “Only that path will save us from destruction, from the devastation of the earth, of creation, of morals, of history, of the family.”

Earlier Nov. 1, reciting the Angelus with visitors in St. Peter’s Square, Pope Francis said the November feasts are reminders that all the baptized — those living and those dead — are united in Christ forever.

“It is beautiful to have so many brothers and sisters in the faith who walk at our side, support us with their help and travel the same path toward heaven,” he said. “And it is consoling to know that there are other brothers and sisters who have already reached heaven, who await us and pray for us so that together we can contemplate for eternity the glorious and merciful face of the Father.”

Leading visitors in St. Peter’s Square in the recitation of the Angelus prayer again Nov. 2, Pope Francis spoke about All Souls’ Day and the importance of praying for the dead — both loved ones who have passed away, but also unknown people who have no one to mourn for or remember them.

“Today we are called to remember all of them, even those whom no one remembers,” he said. “Let us remember the victims of wars and violence, the many little ones of the world who have been crushed by hunger and poverty; let us remember the anonymous ones who now rest in collective graves.”

Offering a Mass for the deceased, the pope said, “is the best spiritual help we can give to their souls.”

After praying privately at the tombs of previous popes in the Vatican grottos the evening of Nov. 2, he celebrated Mass in St. Peter’s Basilica Nov. 3 for the 10 cardinals and 111 bishops who died over the last year.

The deceased included Cardinal Edmund Szoka, former archbishop of Detroit and former head of the commission governing Vatican City State. He died in August at age 86.

“Our prayer,” the pope said, “is enriched by the feelings, memories and gratitude for the witness of these people we have known and with whom we shared service in the church. “Many of their faces are before our mind’s eye, but all of them, each one of them is seen by the Father with his merciful love.”

NEXT: Pope Francis to open Vatican conference on traditional marriage