Rabbi, speaking at the Vatican, champions marriage as male-female bond 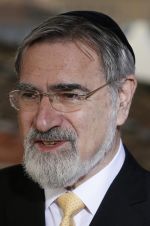 VATICAN CITY (CNS) — The family based on marriage between a man and a woman is the “single most humanizing institution in history” and the test of any society’s future, the former chief rabbi of Great Britain told an interreligious conference at the Vatican.

“Our compassion for those who choose to live differently should not inhibit us from being advocates for the single most humanizing institution in history,” said Rabbi Jonathan Sacks, former chief rabbi of the United Hebrew Congregations of the Commonwealth.

“The family — man, woman and child — is not one lifestyle choice among many. It is the best means we have yet discovered for nurturing future generations and enabling children to grow in a matrix of stability and love,” the rabbi said Nov. 17 at “Humanum,” a three-day colloquium on the complementarity of man and woman in marriage. The event was organized by the Congregation for the Doctrine of the Faith.

“For any society, the family is the crucible of its future, and for the sake of our children’s future, we must be its defenders,” said the rabbi, one of about 30 speakers from different religions who addressed the conference.

Reviewing the history of humanity, Rabbi Sacks spoke about the cultural shift from polygamy to monogamy. Ancient civilizations, which held that the rulers were in the image of God, he said, favored polygamy.

“That is what makes the first chapter of Genesis so revolutionary with its statement that every human being, regardless of class, color, culture or creed, is in the image and likeness of God himself. From this follows that we each have an equal right to form a marriage and have children,” he said. “The norm presupposed by that story is: one man, one woman.”

Monogamy “was a real triumph for the equal dignity of all,” he said. While “monogamy did not immediately become the norm” among the Jewish people, many stories in the Bible “point the way to monogamy.”

The monogamous union between man and woman, he said, “transformed the moral life,” so that love, and not just fairness, became “the driving principle.”

“Morality is the love between husband and wife, parent and child, extended outward to the world,” he said.

Next came the “idea that truth, beauty and goodness, and life itself, do not exist in any one person or entity” but in the exchange that happens in giving and receiving, Rabbi Sacks said. “The Jewish view is that we are half and we need to open ourselves to another if we are to become whole,” he said.

The biological, cultural and theological developments led to another moment, in which “the home and the family became the central setting of the life of faith” and where parents are called to be educators, he said.

“Education is the conversation between generations, and the first school is the home,” he said. The patriarch “Abraham was chosen not to rule an empire, command an army, perform miracles or deliver prophecies, but simply to be a parent.”

Despite being scattered and persecuted throughout history, the rabbi said, “Jews survived because they never lost … their sense of family, their sense of community and their faith.”

Offering a practical example of religious practice, he said the Jewish Sabbath gives “marriages and families what they most need and are most starved of in the contemporary world, namely time.”

The rabbi said the traditional family was “remarkable” because it brought together people’s desires and their needs for friendship, companionship, love, identity and care for children.

“Seldom has any institution woven together so many different drives and desires, roles and responsibilities. It made sense of the world and gave it a human face, the face of love,” he said.

But in the current culture, “almost everything that marriage once brought together has now been split apart. Sex has been divorced from love, love from commitment, marriage from having children, and having children from responsibility for their care,” he lamented.

He went on to share some British statistics: 42 percent of marriages end in divorce; the average length of cohabitation is less than two years; 47.5 percent of children were born outside marriage in 2012; more than 1 million children grow up with no contact with their fathers; 92 percent of single-parent families are headed by women.

“The result is a sharp increase among young people of eating disorders, drug and alcohol abuse, stress-related syndromes, depression and actual and attempted suicides,” he said.

While there are exceptions, those children “who are privileged to grow up in stable loving association with the two people who brought them into being will, on average, be healthier physically and emotionally,” he said. “They will do better at school and at work. They will have more successful relationships, be happier and live longer.”

NEXT: Islam, ecumenism and regional conflict on pope’s agenda in Turkey