New senior facility in Port Richmond gets started with blessing 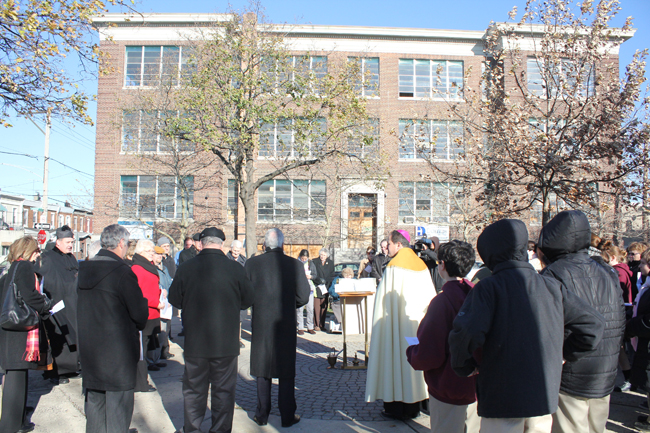 Bishop John McIntyre prepares to begin a prayer service Nov. 21 in front of Nativity B.V.M. Place, which will transform the former Nativity Parish School into a modern assisted living facility for seniors living in the Port Richmond neighborhood. (Sarah Webb) 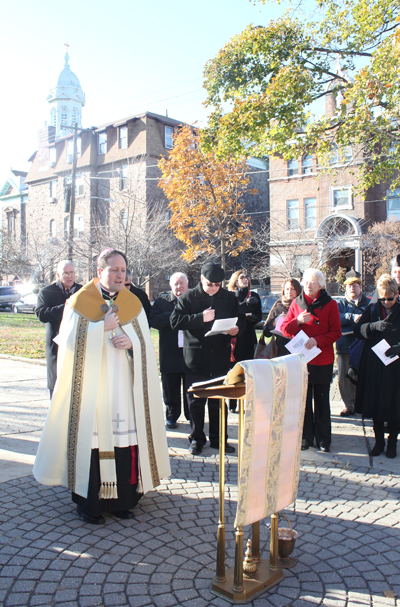 Bishop John McIntyre leads the prayer service that included a blessing of the Nativity school building that in about a year will become Nativity B.V.M. Place. (Sarah Webb)

It’s been on a drawing board for several years and now it’s coming close to fruition.

Bishop John J. McIntyre, in his capacity of oversight over Catholic Health Care Services, presided at a Nov. 21 blessing service in Port Richmond’s Campbell Square, directly across the street from the former Nativity B.V.M. School.

(See a photo gallery from the blessing service.)

A year or so from now after an expenditure of more than $12 million, the almost century-old but solidly constructed building will have been transformed into Nativity B.V.M. Place, a residence for elderly citizens of moderate income.

The school, which as recently as the 1970s had more than 900 pupils, will now be converted into 63 single-bedroom apartments. The 520-square-foot apartments will consist of a living room, bedroom, kitchen and bath designed specifically to meet the challenges often faced by the elderly.

“This long-awaited development will convert this building, which was once dedicated to Catholic education, to now serve the needs of beloved older members of this surrounding neighborhood and community,” Bishop McIntyre said in his remarks.

Attending the ceremony were archdiocesan and parish leaders, civic officials, residents of the neighborhood and fittingly, seventh and eighth grade students from nearby Our Lady of Port Richmond School (formerly St. Adalbert School), which Nativity students now attend.

“This is just another indication of the Archdiocese of Philadelphia and Catholic Human Services coming back into the community,” said Joseph Sweeney, who noted similar projects under way in Northern Liberties and South Philadelphia among others.

This particular project had special meaning for Sweeney, who said, “My wife went to that school and we were married in the church. When I get home tonight I am going to tell her it’s finally done; the school is coming to life again.” 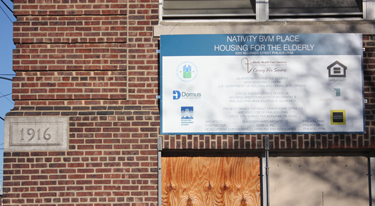 A sign over a window at the nearly century-old Nativity building shows the partners of the project that archdiocesan Catholic Health Care Services is organizing. The project is receiving most of its funding from federal and city agencies. (Sarah Webb)

John Wagner, the director of project development for Catholic Health Care Services, explained the building was given by the parish not to the archdiocese but to a newly formed independent 501c3 organization that now owns the property. That was a requirement to obtain the federal grant, although it will be administered by Catholic Health Care Services.

“I’m exhilarated by this,” he said. “The residents of the top floor will have a million-dollar view of the city skyline.”

Father Daniel Moriarity, a retired priest in residence at Nativity, said, “it’s wonderful, I’m so happy for the people who were born and raised in the neighborhood but might have had to leave it because keeping up their homes would be too much for them. They can come here.”

PREVIOUS: Back from Rome, archbishop looks toward pope’s visit to Philadelphia

NEXT: World economy is built on trust; break it, and all are harmed, says Jesuit