World economy is built on trust; break it, and all are harmed, says Jesuit 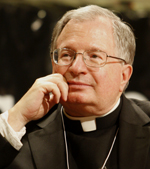 Reflecting on the global financial crisis of 2006-2010 and the church’s efforts to “promote the common good of society,” Father Christiansen advocated for an “economy of grace” identified by retired Pope Benedict XVI in his 2009 encyclical, “Caritas in Veritate” (“Charity in Truth”).

“The credit we extend to others is a kind of grace,” said Father Christiansen during a lecture at Villanova University in Pennsylvania Nov. 18, “and even the strictest commercial undertaking cannot be had without a reservoir of trust between the contracting parties.”

As an example, he noted that while tips are referred to as gratuities, they “are essential to the livelihood of certain service workers, especially the wait staff in restaurants and taxi drivers. A tip is a free-willed offering, but necessary to the welfare of the recipient, especially in this country where it is not mandated. Pope Benedict’s abstract language of gratuitousness is meant to remind us that other people’s livelihoods are in our hands.”

The lecture, titled “The Economy of Grace and the Church of the Poor — Papal Responses to the Financial Crisis,” was part of a yearlong series sponsored by Villanova’s Office for Mission and Ministry and the Journal for Catholic Social Thought.

In his encyclical, Pope Benedict argued that “the moral core of financial actions is an act of trust” that transcends a commercial exchange. In a world “without internal forms of solidarity and mutual trust,” Pope Benedict wrote, “the market cannot fulfill its proper economic function.”

According to Father Christiansen, “the risk of ignoring and losing that fundamental trust is extraordinarily great” in an increasingly automated world where economic transactions are no longer “face-to-face” but aggregated for a global mass market.

“The human element is lost, not just within technological financial devices, but also in the loss of conscious human purpose and in a growing insensitivity to the human consequences of the industry,” Father Christiansen told Catholic News Service. “Finance has ceased to be a means for economic development — it has become an end for itself.”

Describing the way trust was breached to promote economic profit within the real estate sector during the recession, Father Christianson also discussed the effects of current and immoral economic practices, highlighting Wal-Mart’s decision to hire workers on a part-time basis to avoid providing employee benefits.

“When owner families, like the Waltons of Wal-Mart and Sam’s Club, deny their workers full-time employment to line their pockets,” Father Christiansen said, “the public feels an injustice has been done. While the American sense of injustice is muted by the omnipresent ideology of the free market, you note a sense of betrayal of an implicit social contract for a predatory policy of part-time employment by the world’s largest retailer.”

Arguing that humans have become an instrumentalized “means to pragmatic ends” within the financial sector, Father Christiansen described the importance of creating the conditions necessary to produce what Pope Benedict referred to as “an economy of communion.”

“Communion you might say represents an economy of sharing, for the benefits of commerce are shared across society,” Father Christiansen said. “But precisely what defines the pope’s vision of an economy of communion is the disposition of economic enterprises, not to dispense with profit, but to consider it a means for achieving human social ends.”

While fair trade and charitable businesses exist that contribute “to the broader social welfare and human advancement of the people they engage,” Pope Benedict insisted that “we don’t need a special sector of socially responsible business” because “responsibility for the common good is a requirement of all business.”

Today, Father Christiansen noted, “the recession is over, but inequality continues to grow.” Pope Francis recognized income inequality as a “source of social decay” in his apostolic exhortation, “Evangelii Gaudium” (“Joy of the Gospel”), and Father Christiansen described the pope’s personal mission to combat “the root of all social ills.”

“Francis’s distinctive contribution to the general economic reform,” Father Christiansen said, “will be to make the poor of the world visible to the rest of us, to make all of us responsible parties, finance included, to see the connection of between financiaization of the economy and the deprivation of the poor.”

“Pope Francis will save us all by humanizing the poor,” he predicted. “When we come to treat the poor as our fellows, the economy will be humanized.”

NEXT: Sisters’ motto: When giving, keep it simple and keep it quiet