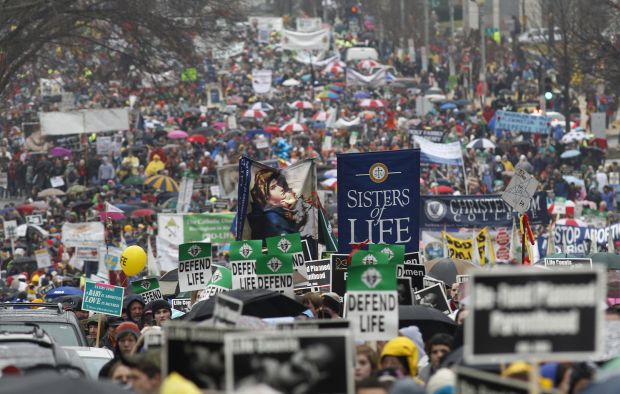 March for Life participants make their way up Constitution Avenue in 2012 to the U.S. Supreme Court building in Washington. CNS photo/Bob Roller)

WASHINGTON (CNS) — “The biggest human rights rally in the world,” as one regular participant described it, will return to the nation’s capital for the annual March for Life Jan. 22.

The 42nd rally on the National Mall and march to the U.S. Supreme Court marks the anniversary of the Supreme Court’s 1973 ruling in the case of Roe v. Wade that invalidated state and federal restrictions on abortions, legalizing abortion virtually on demand.

Micaiah Bilger, education director of the Pennsylvania Pro-Life Federation, said she sees the march as an opportunity to move forward from Roe v. Wade.

“The March for Life is, I think, the biggest human rights rally in the world and it’s wonderful to go and be with other people and unite under that cause,” Bilger said in an interview with Catholic News Service. “It’s important for us to stand up in our nation’s capital and say, ‘Abortion is a human rights injustice and we want to see all life protected.'”

The Pennsylvania Pro-Life Federation usually brings a few hundred participants from around the state, Bilger said. The range of people who attend — from high school students to older men and women who have been going for many years — offers an opportunity for participants to meet others of diverse backgrounds who share the same beliefs about abortion.

“We have a really good, really diverse group of people that go down every year,” she said. “There are so many young people who are going to the March for Life nowadays, so many (pro-life) clubs that are popping up … in high schools and college campuses, and there are … just so many people who are stepping up and seeing that (abortion) is an injustice.”

The March for Life also consistently draws many pro-life groups from college campuses each year. Katie Daniels, a sophomore at Boston College and president of the school’s pro-life club, called the march “the highlight of our year,” and said she expected about 30 students when their bus leaves campus the night before the march.

“It’s a great way to (be) a witness to life outside our campus on a national scale and it’s something we look forward to very much as a club, to kind of participate in this broader national dialogue about what it means to be pro-life,” Daniels said.

Harvard University will also be sending 20 students to the rally. Jim McGlone, a senior at Harvard who has attended six times, said young people are a significant part of the movement.

“I think it shows that this is really the future of our country and our culture,” he said. “The pro-life movement is alive and vibrant and young and joyous and is really a force in our society that can make a really positive change,” he said.

Maggie Bick, a board member of Missouri Right to Life, said she expects about 250 people to join the 72-hour round trip to Washington. Bick said she feels it is important to attend because abortion is not only an injustice, but a mortal sin.

“(Since) our taxpayer dollars are being used to fund the abortion of other people who decide to make that fatal decision, I think we are being complicit in their sin,” she said. “That is why it is worth the fight to me to do everything we can to change the laws, diminish the number of abortions and in particular make the drive for not using our tax dollars for abortion.”

The federal Hyde Amendment prohibits the use of federal tax funds to pay for abortion, with exceptions for cases of rape, incest and danger to the life of the woman. However, many states cover at least some abortions in their health plans for poor women.

Though the March for Life focuses on abortion, the group representatives explained that their support extends to all human lives, regardless of age.

“Part of our mission is also legislative work, so we work in legislation here in Pennsylvania to make sure that there are resources available for pregnant and parenting moms so they don’t feel like they’re being pressured to have an abortion or feel like abortion is their only option,” Bilger said.

Bick agreed it is important for pro-life groups to assist pregnant women in need. She said many members of Missouri Right to Life participate in pro-life causes beyond the march.

“There are some people focused on post-abortive women and there are many people who do … counseling at … (the) one abortion clinic in Missouri,” she said. “Yes, we want to see Roe v. Wade overturned, but we also want to address our concerns for these women who are faced with a decision of whether or not to have an abortion.”

NEXT: Maryland governor commutes sentences of men on death row