Church heightens profile in its work on environment, climate change 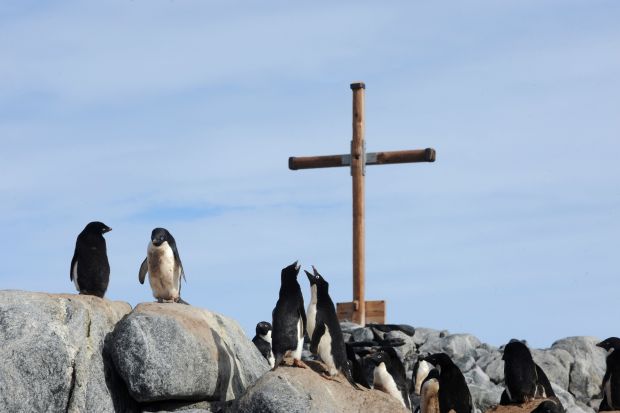 Adelie penguins gather at the base of a memorial at Mawson's Hut in Commonwealth Bay, Antarctica, Jan. 16. (CNS photo/Dean Lewins, EPA)

WASHINGTON (CNS) — When a Vatican official suggested that Pope Francis was contemplating an encyclical on the environment a year ago, he signaled that climate change and environmental degradation were such pressing concerns that the pope wanted to address them in a teaching document.

No word has emerged on what the encyclical might say or when it would appear in 2015, but references by officials at the Pontifical Council for Justice and Peace have pointed to a document that Catholics can apply in everyday life.

Catholics working on environmental issues and climate change in the U.S. are eagerly awaiting the encyclical and have spent much of the last year preparing for it.

“There’s never been an encyclical just on the environment. It’s clear something like this is needed to move, especially policymakers, but even the church,” said Dan Misleh, executive director of the Catholic Climate Covenant.

“I’ve always said we need to recover ancient traditions that we’ve always had but we just forgot. About how we’re supposed to care for creation. About how St. Francis said it’s all kin, we’re all connected together somehow. ‘Brother Sun, Sister Moon,'” he said.

As anticipation builds for the encyclical, Catholic voices have become more prevalent on environmental topics in parallel with President Barack Obama’s ambitious plans to tackle climate change during his final two years in office. From raising awareness about hydraulic fracturing practices to a daylong seminar on the Environmental Protection Agency’s Clean Power Plan for reducing carbon emissions from coal-fired power plants, the work of Catholic clergy and laity have focused on the sacredness of creation and the importance of protecting human life and dignity.

Lonnie Ellis, associate director of the Catholic Climate Covenant, said the encyclical will help extend the discussions beyond the science of climate change and the need for alternative energy sources to include the moral questions about how climate change affects the world’s poorest people.

“There’s not really been the assertion that we have a moral obligation to make something of this, whether it’s right or wrong,” Ellis said. “Whether we’re doing wrong by our brothers and sisters around the world is not even part of the conversation.”

Alice Laffey, associate professor of religious studies at College of the Holy Cross in Worcester, Massachusetts, is hopeful that the attention church leaders place on the environment will create greater awareness of how personal consumption habits in the developed world affect the most vulnerable people.

“It’s essential within the (Catholic) tradition that we respect creation,” she said.

Archbishop Thomas G. Wenski of Miami, chairman of the U.S. bishops’ Committee on Domestic Justice and Human Development, highlighted such moral concerns during a daylong workshop Oct. 20 in Washington.

The archbishop told the gathering that the church is concerned about pollution and climate change because they adversely affect human life. Humans, he said, have been designated as co-creators by God to be good stewards of the earth’s resources.

“The Catholic conception of stewardship of the environment is also rooted in the dignity of the human person and his relationship with God. This relationship finds its origin for us, ‘in the beginning,'” the archbishop said, referencing Genesis.

The focus on environmental stewardship comes as the worldwide climate warms. The first 10 months of 2014 were the warmest since record keeping began in 1880, according to data compiled by the National Oceanic and Atmospheric Administration and the World Meteorological Organization.

Among those acting were the Marianist-run University of Dayton in Ohio. The school’s board of trustees unanimously approved a plan to shift funds first from fossil fuel firms. The university is believed to be the first Catholic higher education institution to undertake such action.

“This really is a huge priority because of our religious convictions that this earth is a gift. We are meant to protect it and sustain it,” Marianist Father Martin Solma, provincial superior of the order’s U.S. province and vice chairman of the university’s board of trustees, told Catholic News Service in June.Later in the summer, the Diocese of Stockton, California, joined a partnership with the solar energy firm Sungevity to help members of three parishes reduce their electric bills while raising funds for their church and local Catholic Charities programs.

Introducing the program Aug. 16 at the Cathedral of the Annunciation in Stockton, Bishop Stephen E. Blaire said the effort gives parishioners the opportunity to add a solar energy system to their homes with little or no upfront cost while reducing their dependence on fossil fuels.

The year ended with the U.N. climate summit, Dec. 1-12 in Lima, Peru. Nearly 200 governments gathered to produce the first draft of a global deal to cut emissions greenhouse gas, a major cause of climate change. The draft is important because world leaders will meet in Paris next December where it is hoped that the first agreement to cut global emissions that includes developed and developing countries will be finalized.

In the middle of the summit, faith leaders gathered Dec. 7 in #LightForLima prayer vigils in Canada, United Kingdom, Bangladesh, Russia, South Africa and U.S. locales. Patrick Carolan, executive director of the Franciscan Action Network, was among those who prayed near Washington’s Lafayette Square.

He credited Pope Francis for awakening the Catholic voice on climate change.

“He’s really gotten people out of this mindset there’s nothing we can do or climate change is God’s will,” he said. “It’s an understanding this is the important issue.”

NEXT: Religious leaders on torture: Don’t let it happen again