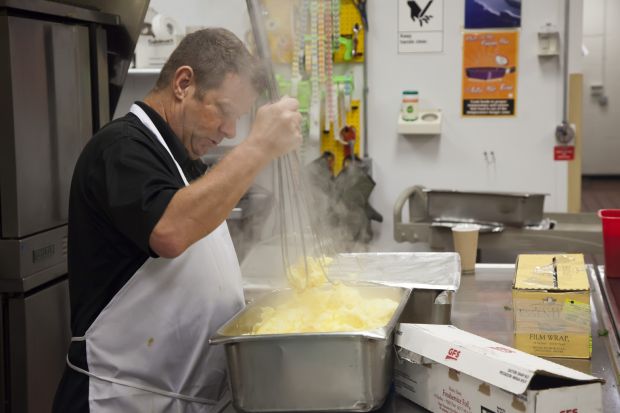 A volunteer prepares scrambled eggs for breakfast in 2011 at the Capuchin Soup Kitchen in Detroit. The $1.1 trillion federal spending bill approved by the House of Representatives Dec. 11 and pending in the Senate avoided a repeat of last year's government shutdown and largely keeps in place social services spending. (CNS photo/Jim West)

Beyond the current fiscal year that ends Sept. 30, the future is less certain, however, as Republican victories in the November elections gave the party control of both chambers on Capitol Hill. With the new leaders come new plans on limiting federal spending and reducing the country’s $17.6-trillion debt.

In the House, Rep. Paul Ryan, R-Wisconsin, chairman of the Committee on the Budget, will slide over to head the powerful tax-writing Committee on Ways and Means. Ryan has written recent budget plans that would have resulted in less spending on social services while implementing tax cuts for most wage earners had the Democratic-controlled Senate concurred. He will be succeeded by Rep. Tom Price, R-Georgia, who played a major role in shaping the 2011 and 2012 House GOP budgets.

In the Senate, Sen. Patty Murray, D-Washington, will yield her leadership of the budget committee. Sen. Jeff Sessions, R-Alabama, is expected to step in as ranking minority member, but he is being challenged by Sen. Mike Enzi, R-Wyoming.

Ryan, who is Catholic, suggested in July that an investment in case management services would better serve low-income families in the long run. His Expanding Opportunity in America proposal encompasses a series of measures he believes will help move — and keep — people out of poverty. He said he hoped the proposal would start a nationwide discussion on how to tackle the poverty afflicting 45.3 million Americans.

The Republican lawmaker came to like case management services after a March 10 visit to a Catholic Charities program in his district. There, he met clients who were teamed with a case manager and he saw how they were on the way to self-sufficiency in a pilot program of Catholic Charities USA.

While the poverty discussion never emerged as Ryan had hoped — likely because it was election season — his proposal remains alive.

For now, social services leaders such as Brian Corbin, senior vice president for social policy at Catholic Charities USA, will be watching the 114th Congress to ensure that programs benefiting poor and vulnerable people remain in place.

“Probably we at Catholic Charities and other partners just have to continue to meet with leaders on both sides of the aisle in the House, the Senate and the White House. Obviously, we have to keep talking about poverty,” Corbin told Catholic News Service.

Catholic Charities is turning to its 2007 policy paper to help guide its legislative agenda. The paper focused on five major concerns: education and workforce training, family economic security, health, housing and hunger. As a follow up, diocesan Catholic Charities programs were surveyed in November to determine how those areas were being addressed locally, Corbin said.

Presentation Sister Richelle Friedman, director of public policy at the Coalition on Human Needs, said that while poverty must remain a priority in the federal budget, any changes that Congress may consider must not reduce benefits.

“We have some large concerns about where we might be headed (in the new Congress),” she said.

In particular, Sister Richelle cited Ryan’s repeated proposals for converting federal funding for social services into block grants to states. She said such an arrangement likely will lead to significant cuts in programs.

The U.S. Conference of Catholic Bishops made its views known after the elections as the end-of-the year budget negotiations ramped up. In letters Nov. 17 to all 535 members of Congress, the chairmen of two prominent committees urged the elected representatives to “draw a ‘circle of protection’ around the many programs that serve poor and vulnerable people at home and abroad.”

— Assess every budget choice for how it protects or threatens human life and dignity.

— Measure budget proposals by how they affect hungry, homeless, unemployed and impoverished people.

— Recognize that government and other institutions share responsibility to promote the common good.

Mark Rohlena, director of the bishops’ Office of Domestic Social Development, told CNS the letter was consistent with earlier messages to Congress that the budget is a moral document and frames the nation’s priorities.

“From the perspective of our advocacy, we will continue to look at budget issues and proposals that become part of the next Congress through that lens of how it affects those most in need,” he said.

Kim Daniels, senior adviser to Catholic Voices USA who served a short stint as spokeswoman for former USCCB president Cardinal Timothy M. Dolan of New York, said the “time is right” for Congress to work across political divides to address poverty. She pointed to Ryan’s plan as a possible starting point.

Ryan’s proposal included a Democratic idea to expand the earned income tax credit by lowering the eligibility age for workers from 25 to 21. It’s an idea that Daniels said is worth considering.

She added that Congress would do well to discuss the minimum wage, “so that families can support themselves.”

“It’s important for us to solve the problem of a low-wage economy in a way that those who live in poverty can meet their basic needs,” she told CNS.

PREVIOUS: Only in Philadelphia? 11 other cities want to host Pope Francis too