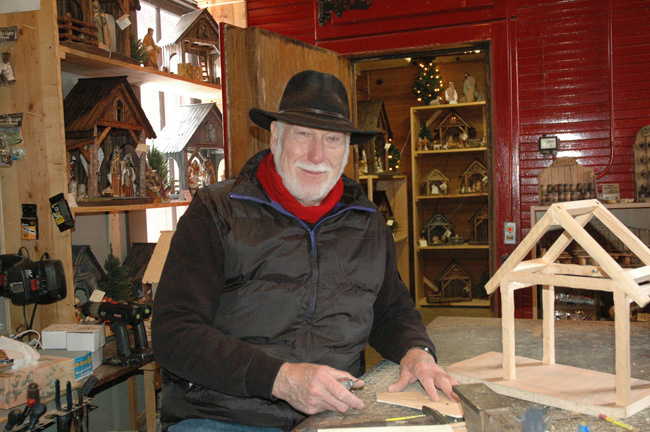 Indiana craftsman Ed Kirschner works on a Nativity stable he is making in his small shop in Oldensburg. Kirschner says his creations help him reflect on his faith and share stories about Christmases from his past. (CNS photo/John Shaugnessy, The Criterion)

OLDENBURG, Ind. (CNS) — Ed Kirschner knows there’s one thing he can count on when people visit his small shop where he creates Nativity stables.

Before long, the visitors will start sharing stories about Christmases from their past, focusing on memories of the Nativity sets that their parents and grandparents displayed through the years.

And while Kirschner prefers listening to other people’s stories, he has his own heartwarming memories to share. Like from his childhood, when he and his mother would make Nativity scenes from boxes and brown paper.

“It was time we spent together when I was little,” recalled the 75-year-old member of Holy Family Parish in Oldenburg. “My mother had a very strong faith. As far as she was concerned, setting up the Nativity was always a focal point of Christmas.”

His stories also include one of the first wooden Nativity stables he ever made — a Christmas gift for his wife, Joyce, that he gave her shortly after they were married and moved into their first home.

“We used it for about 10 years as the kids came along,” said the father of four grown children who has been married for 54 years. “It was kind of plain, and I replaced it with a new one. My wife didn’t like that I did that. It had all the memories and traditions attached to it. That’s the way it is for a lot of people. Those traditions and memories are important. She still mentions that one from time to time.”

Then there’s the Christmas story involving Nativity stables that just may be his favorite.

“When one of my grandsons, Alex, was 12, he came over to our house during the summer, and we worked on making them together,” said Kirschner, who has nine grandchildren. “He made seven of them. That Christmas, he gave me the first one he ever made. We still put that one up for Christmas every year. He’s almost 21 now. … Eventually, we’ll give it back to him when he gets married.”

Kirschner shared those stories as he sat in the Creche Shop in the heart of the village of Oldenburg in southeastern Indiana.

Some of his handcrafted Nativity stables were on display in an old ice locker that was once part of a general store. In his small workshop, the tools he uses are always close by: a skill saw, a miter saw, a drill, a screwdriver and a box cutter.

Figurines of Mary, St. Joseph, the baby Jesus, angels, shepherds and the three Wise Men watch over him.

In an interview with The Criterion, newspaper of the Indianapolis Archdiocese, Kirchner said he has been making the stables for about 20 years. He started in his garage when he retired at age 54 from his job as a buyer for a Cincinnati department.

For Kirschner, it’s special that he gets to do something that reflects his faith.

“Faith is a very important part of my life,” he says. “My wife and I both attend Mass two or three times a week, and on Sunday, of course. Our faith ties into what we think.”

“I hope they make a difference for people,” he said about his stables. “For most people, the Nativity scene is a very important part of their Christmas. A lot of people get them for their children and their grandchildren. People give them to couples who are getting married so they can have that tradition.”

In carving the Nativity stables by hand, Kirschner tries “to make everything look like it was made of hand-hewn logs.” He also adds a cross to each stable.

“I just thought the cross should be an important part of the Nativity,” he explained. “Without the death and the Resurrection, there wouldn’t be much of a reason for the Christmas story. It’s part of the whole narrative.”

Kirschner also strives to make each Nativity stable different — in a way reflecting the variety of people from across the country and around the world who have stopped by his small shop.

Kirschner who works year-round in the shop, averaging about 40 to 50 hours a week there. “I feel very blessed at my age that I have something to do, that I enjoy doing it, and I get to meet a lot of people and hear their stories.”

This year, like every year, Kirschner and his wife planned to go to midnight Mass on Christmas. He has gone every year since he was a little boy.

“My mother’s faith was yearlong,” he said, remembering the woman who started his love of the Nativity scene.

“It wasn’t just focused on Christmas. She was a very religious woman. Advent and everything associated with the church was important to her.”

Shaughnessy is assistant editor of The Criterion, newspaper of the Indianapolis Archdiocese.

NEXT: Church leaders pleased that U.S.-Cuba will rebuild relations