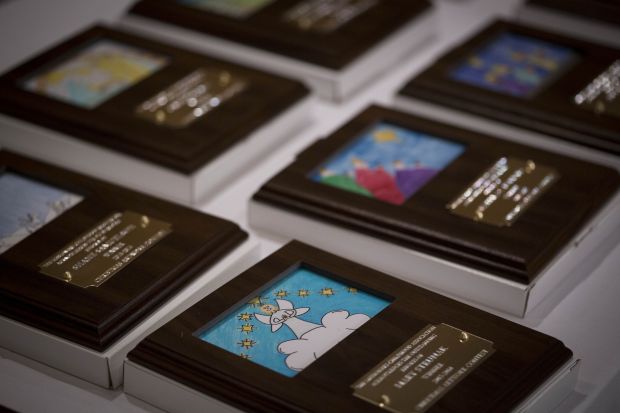 Plaques with each winner's artwork displayed rest on a table at the Basilica of the National Shrine of the Immaculate Conception in Washington Dec. 5. (CNS photo/Tyler Orsburn)

WASHINGTON (CNS) — A special Mass Dec. 5 and an exhibit at the Basilica of the National Shrine of the Immaculate Conception in Washington celebrated the winners of the annual Christmas artwork contest sponsored by the Missionary Childhood Association.

An agency of the Pontifical Mission Societies, the association asks children in the nation’s elementary schools and parish religious education programs and those who are home-schooled to submit their artwork to illustrate “The Nativity & Mission.”

They can illustrate the Christmas story using images of shepherds and angels, the Three Kings and the Holy Family, the animals present by the manger, and the infant Jesus.

Each year, 24 winners are chosen and their works of art are featured as e-greetings on the main Missionary Childhood Association’s website — www.MCAKids.org. The artwork remains on display at the national shrine through Epiphany, which is Jan. 6.

Fifteen winners and their families attended the celebration in Washington, including this year’s grand prize winners: Ruby Pruitt from Godfrey, Illinois, in the Diocese of Springfield, and Emily Kim from the Diocese of Arlington, Virginia.

Two winners are chosen to have their artwork be part of the national director’s Christmas card.

Beginning in 1916, what is now the Missionary Childhood Association issued Christmas seals. The association started using children’s artwork on the seals in 1933. In 2005, it created Christmas cards with the youngsters’ artwork; e-greetings with the winners’ designs were introduced in 2007.

NEXT: 2014 brought a chance at change for millions of immigrants