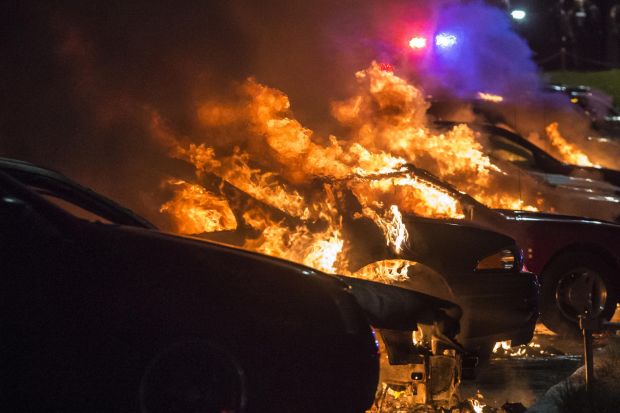 Vehicles at a car dealership are set afire in Ferguson, Mo., early in the morning Nov. 25, the morning after a grand jury returned no indictment in the Aug. 9 shooting death of Michael Brown in the St. Louis suburb. (CNS photo/Adrees Latif, Reuters)

“My heart is broken,” he wrote in an email. “Words can’t describe the near destruction of our beloved city of Ferguson.”

Firefighters arrived to fight the fires but took gunfire and withdrew for their safety. In all, 21 businesses were destroyed by fire.

Father Robert “Rosy” Rosebrough walked through the area Nov. 25, the day after the violence, and quietly blessed businesses and employees, who are now out of work. Among the discussions in the aftermath of Brown’s death, lack of economic opportunity in poor communities has been at the forefront, yet the robbing, looting and arson eliminated the source of employment and economic opportunity for many.

“My heart was very saddened and disappointed with the violence, looting and destruction of property,” Father Rosy wrote in a reflection on the Blessed Teresa website. “Many people will have no income for months. The effects of hatred, violence and hopelessness have a tremendously rippling impact upon the lives of many people.”

“What struck me … was that no matter where St. Catherine was, free or in prison, she was going to be true to herself and her mission, like a piston of a motor that continually revolves, again, again and, again,” he stated. “As a rhythm ingrained in her very being, she would always offer the gift of hope and tell others of the abundant life the Jesus Christ is offering to all of humankind.”

He offered hope, something devoid of many among the protesters upset by the fatal shooting of 18-year-old Brown, an African-American, and the grand jury decision not to indict Wilson, who is white.

Protests are ongoing in Ferguson and around the country. On Dec. 1, workers and high school and college students in several cities walked off the job and away from classes to protest.

A news panelist “commented that many young African-American men are overwhelmed with a sense of hopelessness and have no regard for their own life or for anyone’s property,” Father Rosy wrote on his parish website. “When you are filled with hopelessness, there is no room in (your) heart to think about the consequences of (your) actions. It is in this world of brokenness that Jesus Christ came in Bethlehem 2,000 years ago.”

Father Rosy has called Ferguson the “New Bethlehem,” ground zero where change can be made in society by “leaning in,” as he said, and truly listening to the words others are saying.

“When we listen to the stories of others, when we hear their pains and frustrations and they hear ours, we discover that we are brothers and sisters,” he concluded.

There are good people in Ferguson, whether at Blessed Teresa, nearby Our Lady of Guadalupe Parish, or just people willing to help out. Pro Football Hall of Famer Aeneas Williams, the former Ram who remained in St. Louis after retirement and became a pastor, was among those helping to clean up businesses Nov. 25.

Like Father Rosy, Sister Cathy Doherty, a School Sister of Notre Dame and pastoral associate at Our Lady of Guadalupe, walked around Ferguson in the aftermath of the violence and observed “lots of good people helping everyone.”

Though heartbroken now, Fletcher has hope that Ferguson will rebound from this, just as it did in recent years with massive destruction by tornadoes.

“I believe God only gives us what we can handle,” stated Fletcher, chairman of the “I Love Ferguson” committee. “From the ashes, we will rise a better and stronger Ferguson. God Bless Ferguson. … Let’s show the world the power of peace and unity.”

NEXT: N.Y. religious leaders ask for progress through peace